With Viking soul running through his veins and Highland Park inked across his heart, the passion of brand ambassador Martin Markvardsen is second to none. The Dane spoke to Melita Kiely about his love for Orkney, his days in the Royal Danish Navy and the most bizarre request he’s received from a fellow Highland Park fan. 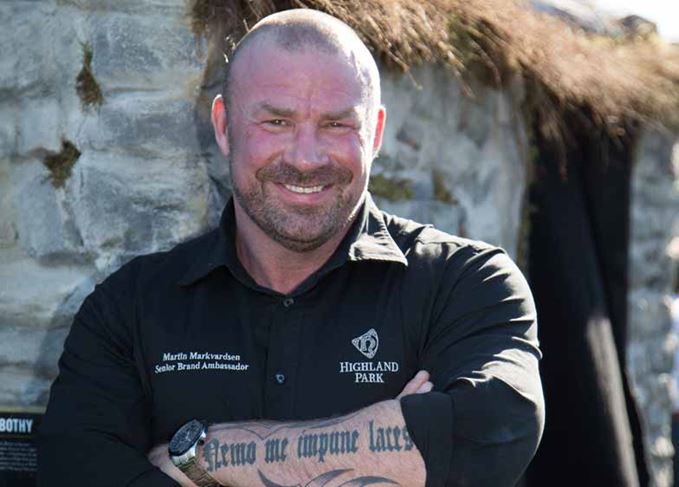 Viking soul: Martin Markvardsen has a Highland Park tattoo on his chest

‘I’ve been in the whisky industry for 27 years. My first distillery visit was to Glenkinchie while I was in the Royal Danish Navy and we had an exercise in Scotland. For about 10 years I did whisky tastings and took my time off to go to Scotland and visit distilleries.

‘When I left the navy, I started working full time in whisky shops, such as World of Whisky in Copenhagen airport. Then I moved to Scotland and became whisky manager at the Craigellachie Hotel.

‘I remember when I got the call asking me to be brand ambassador for Highland Park – it arrived like a call from above because it came the day I quit working at the Craigellachie Hotel. The hotel was being taken over by another group and they didn’t want a whisky manager, they wanted a hotel manager. It took me about two seconds to say yes.

‘Highland Park was my favourite whisky and that was no secret. It was one of the reasons they called me. The first five or six years I was responsible for Northern Europe, to build the reputation between Orkney and the Nordic regions. Then as we grew I travelled to Asia, the rest of the EU, the UK – we have some great ambassadors in the US, so there’s no need for me to go there right now.

‘Last year I spent 236 days travelling. As it looks for 2017, I think I’ll be travelling a little less though there will be longer periods away. But really, it doesn’t feel like that much. If you have passion, if you love what you’re doing, it doesn’t always feel like work. For me, every day working with whisky and a brand like Highland Park is like being a professional football player – it’s a dream come true.

‘I never get bored with it; every day’s a new day. I’m learning all the time as well. There are never any two crowds that are the same; never two whiskies that are the same. I enjoy new experiences all the time, and being part of something like Highland Park Ice and Fire, making new products, makes my job even more enjoyable.

‘Part of my job is to be on Orkney, but to go to Orkney is one of my favourite places on the planet. I love, first of all, the people – they’re very, very genuine and open-minded. Then I like the raw nature; there are no trees but the winds are incredible. For me, being Nordic, going to Orkney makes me feel the old Viking soul still goes on.

‘When we have guests to the island, they never know what I am talking about until they are there, and then they feel it. People on Orkney, every person who lives there, can still take their bloodline back to the Vikings. I feel I’m at home; it is my home.

‘Of course, it’s always exciting to go to Asia, Korea, Malaysia, Singapore – people over there have a very different approach to whisky than they have here in the Nordics. So whisky ambassadors have to change – you can’t just do the same thing you do anywhere else. We have to adapt to the people we’re talking to.

‘I still have my son in Denmark; he’s 16 years old. He doesn’t have a big interest in whisky yet, which is good at his age. It is hard because I travel so much, but we are used to it as I have always had to travel for work since he was born.

In awe: Markvardsen describes being am ambassador for Highland Park as a ‘dream come true’

‘My son has a huge passion for films and cinema, so we make time to go to the cinema or have film nights at home, watching The Lord of the Rings or The Hobbit – just enjoying time together.

‘When I was in Singapore, there was a guy who asked: “Can I have your signature on my forearm?” He explained it was because he wanted to have it tattooed. I said: “No,” and told him he needs to think about it. In the end, I gave him my signature on paper. That’s the thing with Highland Park – it has friends all around the world.

‘I got my own Highland Park tattoo on my chest about six or seven years ago. It’s of the Highland Park logo. I am very proud of what we are doing and it is such a big part of me. I wanted to have it close to me and close to my heart. It’s a beautiful tattoo, beautiful logo.

‘I probably have 12-15 tattoos – all Viking-inspired. I have the motto from Orkney and Scotland on my body – I am probably more Scottish than Danish, and probably more Orkney than Scottish.’