Bruichladdich distillery is releasing what is claimed to be the peatiest whisky produced in Scotland as part of its new Octomore Eights Masterclass series. 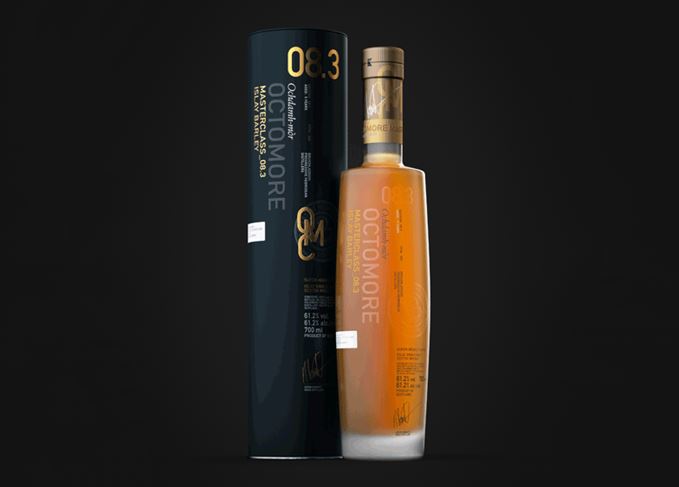 Until now the peatiest whisky on record was Octomore 06.3, released in 2015 and containing barley peated to 258ppm.

The new Octomore Masterclass 08.3 contains whisky distilled in 2011 from barley harvested by the nearby Octomore Farm the previous autumn.

‘The nature and variety of Octomore depends on far more than simply numbers, but these were staggering. Off the scale.’

A whisky’s ppm usually refers to the amount of phenols imparted onto the barley during the drying stage of the malting process, rather than being a direct indication of the ‘smokiness’ of the whisky itself.

The ppm level can vary depending on whether a colorimetric reading or one from HLPC is taken, the latter producing higher figures.

However, Bruichladdich claimed that Octomore 08.3 is the peatiest malt yet made at the distillery.

A spokesperson said: ‘We believe it to be the peatiest Scotch ever produced, but then we are not some omnipotent, all-knowing Yoda.’

Following distillation, the heavily peated spirit was matured in a combination of ex-Bourbon casks, and ex-wine casks made from European oak, for five years.

The expression is the only release in the new Masterclass series not bottled as an eight-year-old.

Carl Reavey, head of communications at Bruichladdich, said: ‘The rules are meant to be broken of course. Octomore has usually been five years old (except when it has been 10, or seven). The eights are, inevitably, eight years old, except for the one that isn’t.’

He added that the new series is ‘the first chapter in the Octomore odyssey to be entirely created by [master distiller] Adam Hannett, and the first to be presented as a coherent Masterclass’.

He added: ‘Octomore actually means “The Big Eighth”, so we have reached an important milestone. Adam sees this as a symbolic moment – one to pause and reflect on the subtle control of sensory nuance, past, present and future.’

The four whiskies comprising the Octomore Masterclass Eight series are: