EXCLUSIVE: Macallan has removed some of its 19th-century bottles from public display at the distillery after a hotel guest in Switzerland paid US$10,000 for a glass of 1878 Macallan widely believed to be a fake. 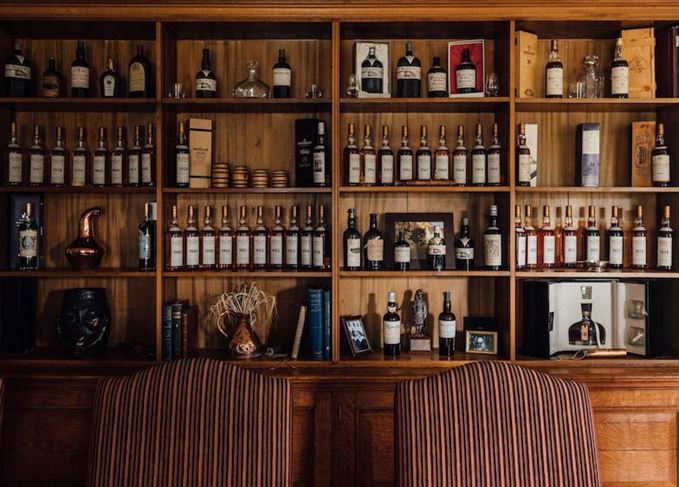 No longer there: Some 19th-century bottles have been removed from public display at Easter Elchies House

The withdrawal of ‘a few very old’ bottles from display at the Macallan distillery follows the launch of a full investigation by the Hotel Waldhaus am See in St Moritz, Switzerland, into the allegedly fake bottle.

But whisky collectors raised a number of concerns about the bottle, including the condition of the cork and alleged historical inaccuracies on the label, prompting the investigation and a promise from the hotel to reimburse the guest if the bottle is a fake.

Whisky enthusiasts have also questioned why some ’19th-century’ bottles similar to the Waldhaus Macallan have continued to be displayed at the Macallan distillery near Craigellachie, Speyside.

Macallan owner Edrington bought up to 100 apparently 19th-century bottles of Macallan in the early 2000s, auctioning some, offering others for sale and making modern ‘replicas’ of the spirit until tests showed that the whisky inside the bottles was counterfeit.

However, the company maintained that the bottles themselves were genuine, citing tests that showed that the glass and label paper dated from the 19th century.

Asked about the continued display of the 19th-century bottles at the distillery, Edrington initially told Scotchwhisky.com: ‘The Macallan antique bottle collection on display at the Macallan distillery in Speyside provides historical insight into the Macallan bottle designs and labels from the 19th and early 20th centuries.

‘Independent tests conducted after the acquisition of the wider collection confirmed both the glass and the labels of the bottles on display are from the respective period.’

However, when questioned about the similarities to the Waldhaus bottle and the alleged historical inaccuracies on the labels, the company told us on Monday (14 August): ‘Following your enquiry last week, we have reviewed all of the bottles which we have on display in the private areas of Easter Elchies House.

‘We believe these are genuine. As a precaution, however, we have removed a few very old bottles from display while we update previous validation work in the light of improved technology and knowledge in the field of authentication.

‘We are in the process of creating an exhibit in the new visitor centre currently under construction, where a fully authenticated collection will be on public display from early summer next year.’

The company has not yet revealed exactly how many bottles have been removed, and which ones. The display included a number of ‘old’ bottles, including vintage Macallans dated 1841, 1861 and 1879.

Odd one out?: The 1878 Macallan bottle (centre), pictured at Hotel Waldhaus

Meanwhile, Waldhaus hotel manager Sandro Bernasconi has contacted a testing facility in Scotland to establish whether the 1878 Macallan bottle is a fake, with analysis likely to cover the cork, bottle, label and whisky. Results are expected to take several weeks, if not months.

Edrington has pledged to assist with this work. The company said: ‘Edrington has been in contact with Mr Sandro Bernasconi and is providing further assistance in relation to the technical analysis process.’

In the late 1990s and early 2000s, a large number of suspicious or fake Scotch whisky bottles – Macallan, but also others including Talisker and a number of closed Campbeltown distilleries – began to appear at auction.

Edrington bought about 100 of these, despite widespread concerns over their authenticity but, following investigations by Scotchwhisky.com chief engineer Dave Broom, then working at Whisky Magazine, tests proved that the whisky was fake, and sometimes as young as 10 years old.