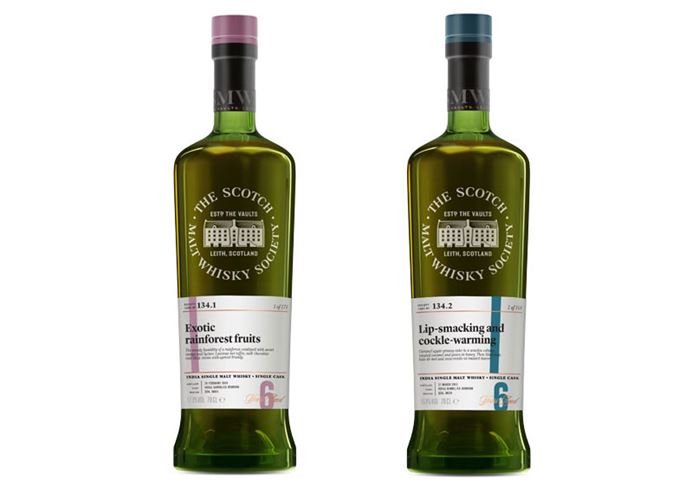 New horizons: The two whiskies are the first from India bottled by the SMWS

Representing the 134th distillery to be bottled by the Society, ‘Exotic rainforest fruits’ and ‘Lip-smacking and cockle-warming’ are both six-year-old single cask single malts, matured in refill ex-Bourbon casks.

‘Exotic rainforest fruits’ was distilled on 28 February 2010, with 174 bottles available at 57.9% abv, and was placed in the SMWS ‘sweet, fruity and mellow’ flavour profile.

‘Lip-smacking and cockle-warming’ was distilled on 31 March 2010, with 168 bottles available at 58% abv, placed in the ‘juicy oak and vanilla’ flavour camp.

Both are priced at £145 a bottle, and will be available to society members via a ballot from tomorrow (19 October).

The SMWS said the distillery’s location on the western coast of India had a ‘significant impact’ on maturation, with the ‘angels’ share’ reaching 8% a year, compared to a typical 2% in Scotland.

‘Our aim at the Society is to search the world for exciting single casks to share with our members,’ said Kai Ivalo, spirits director at the SMWS.

‘These two casks from Goa are perfect examples – it’s fascinating to see how the different climate and faster maturation process there has created such an amazing array of juicy, sweet and spicy flavours.’

The two whiskies will be released tomorrow (19 October) in the UK and EU, and will be available to members through a ballot to ensure a fair allocation.

The bottles will be available at other key SMWS branches, such as Australia and the US, later in 2017.