Speyside distillery Balvenie has released a limited edition 25-year-old DoubleWood expression to celebrate the 25th anniversary of the first release of its flagship DoubleWood 12-year-old. 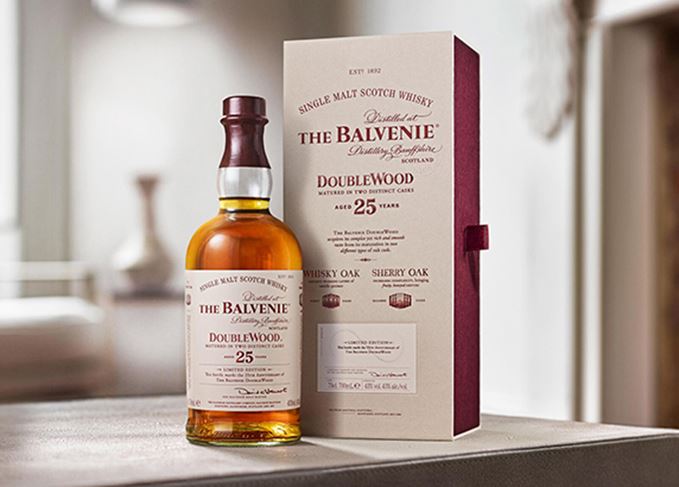 The single malt has been fully matured for 25 years in American oak casks and finished for three months in Spanish oak ex-oloroso Sherry casks.

David Stewart MBE, malt master at Balvenie, said: ‘The final liquid has a lovely combination of sweetness and spice, with candied orange, layers of brown sugar and sweet dried fruits.’

Bottled at 43% abv, the whisky was laid down in 1993, the year Balvenie’s DoubleWood 12-year-old expression was first released.

The DoubleWood 12-year-old is a rebranded version of the Balvenie Classic, an expression released in 1983 which was one of the first whiskies to have undergone secondary maturation.

Stewart said: ‘When we launched the first DoubleWood in 1993, I would have never thought we would eventually be bottling a 25-year-old variant as we are today.

‘It’s a testament to the success of DoubleWood that we are releasing this more mature expression.’

Anniversary year: A limited edition label has been released for Balvenie DoubleWood 12-year-old to mark the occasion

The 25-year-old has been given a shorter secondary maturation than the 12-year-old expression, which is finished for nine months in ex-Sherry casks, as Stewart decided the more mature whisky ‘had already taken on a greater level of spice and complexity’ than its younger counterpart.

The commemorative bottling is available globally and is priced at £400/US$599.

The whisky is packaged in an opaque maroon box adorned with an infinity symbol, designed to represent the marriage of Spanish ex-Sherry and American oak casks.

The release is part of a ‘year of celebrations’ as Balvenie pays tribute to Stewart’s pioneering work and the distillery staff who help create the DoubleWood expressions.

As part of the celebrations, Balvenie has also released an anniversary edition of DoubleWood 12-year-old which features a commemorative label.