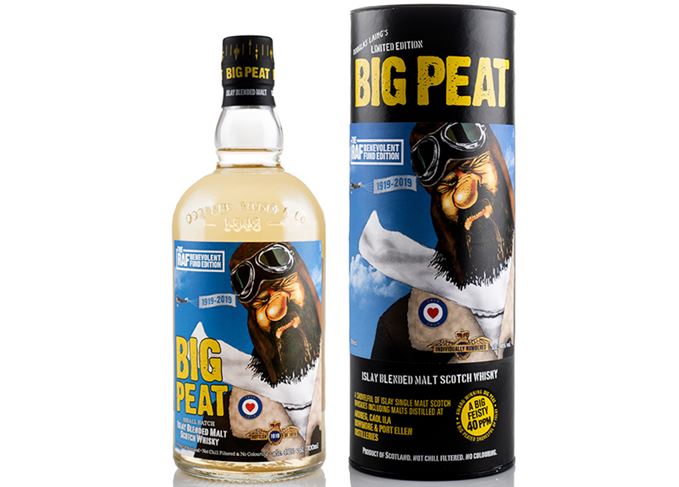 The Big Peat RAF Edition, which commemorates the centenary anniversary of the charity’s establishment, is described as having ‘a sweetly peated’ nose with notes of ‘chimney soot and damp ash’ on the palate.

The Big Peat RAF Edition contains a blend of single malts from Islay distilleries, including Caol Ila, Bowmore, Ardbeg and Port Ellen, and was bottled without colouring or chill filtration at 46% abv.

A total of 1,919 individually-numbered bottles have been created to honour the year of the RAF Benevolent Fund’s inception, and are available to purchase for around £48.99 in selected European and Asian retailers.

The bottling’s label features the Big Peat character in original RAF attire with a leather flying helmet, a shearling jacket with a commemorative pin badge and a white silk scarf.

The label also depicts a Sopwith Camel, a British First World War fighter aircraft, flying a banner depicting the dates 1919-2019, the commemorative years of the charity.

Douglas Laing, which is also celebrating the 10-year anniversary of its Big Peat expression, will donate £5 to the charity for every RAF Edition sold.

The company said the RAF Benevolent Fund has been a cause ‘close to the hearts of the Douglas Laing family’ as its founder, Fred Douglas Laing, flew with the RAF throughout World War II.

Fred Laing, company chairman and second generation of the Laing family, said: ‘This latest initiative follows our Clan Denny Braeval “Spitfire” bottling of 2013 and more recently, our donation of a rare bottle of XOP Port Ellen single malt, collectively raising several thousand pounds for the cause.

‘With £5 per bottle of this new release being channelled directly to the charity, we look forward to presenting our friends at the RAF with a cheque in the near future.’

The RAF Benevolent Fund is the welfare charity for the RAF and provides financial, practical and emotion support to former and serving members and their families.

The expression is the second Big Peat limited edition released by the company this year.