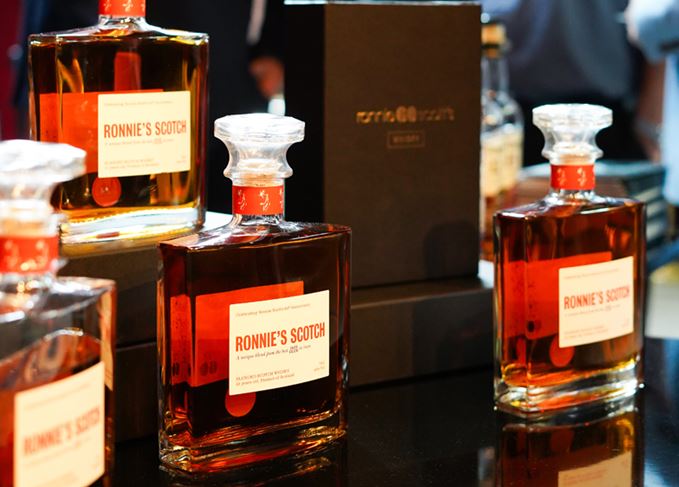 Finely tuned: The whisky was blended by members of the famous jazz club’s house band

The whisky is comprised of grain whisky from Girvan distillery matured in first-fill ex-Bourbon casks and single malt from the Angus Dundee-owned Tomintoul distillery, matured in a mixture of ex-Bourbon and ex-Sherry casks.

Bottled at 43% abv, only 1,000 bottles of Ronnie’s Scotch have been produced.

The recipe for the blend was created by Angus Dundee global brand ambassador Iain Forteath and the members of Ronnie Scott’s All-Stars, the club’s house band.

Forteath said: ‘The five band members of the Ronnie Scott’s All-Stars and I came together, blended five different whiskies and voted on the final recipe.

‘The end product has got a little bit of peat character to it, but we didn’t want to scare anyone away – it’s hopefully as complex as a well-written piece of music.’

Priced at £75 per 70cl bottle, the whisky is available to purchase on the Ronnie Scott’s website, although buyers will need to visit the club to collect it.

Since first opening in 1959, Ronnie Scott’s has hosted jazz luminaries such as Miles Davis, Ella Fitzgerald and John Coltrane, in addition to legendary artists from other genres such as Jimi Hendrix.

Ronnie’s Scotch is not the only whisky with a strong jazz link: since 2011, Lagavulin has produced an annual limited edition bottling to commemorate the Islay Jazz Festival.