Lost Lowland distillery Littlemill has released a 29-year-old single malt, comprised of whisky from ‘some of the last remaining casks’ filled before the distillery closed. 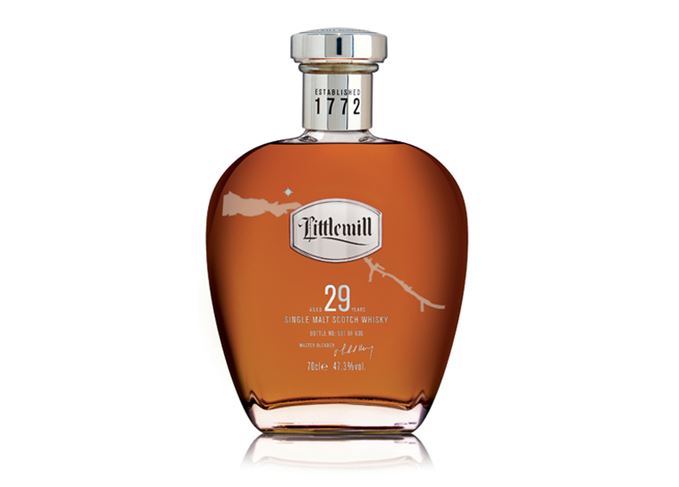 Lost liquid: The Littlemill 29 Year Old was distilled in 1990, four years before the distillery shut

Littlemill 29 Year Old has been matured in refill ex-Bourbon casks laid down in 1990, four years before the distillery shut, and has undergone a secondary maturation in first-fill oloroso Sherry and Limousin oak casks.

Bottled at 47.3% abv, the whisky is said to have a ‘silk-like’ mouthfeel with notes of ‘crisp green apple, ripe pear and kiwi fruit’.

The whisky is the latest addition to the Littlemill Private Cellar collection, a series of releases created by the Loch Lomond Group after acquiring the distillery’s remaining stocks of whisky.

‘The oloroso Sherry adds further floral notes to the whisky, similar to the Sherry casks once used at the Littlemill distillery, while the Limousin oak provides the European oak influence.’

The liquid is housed in a Glencairn crystal decanter, decorated with an illustration depicting the distillery’s location near the River Clyde, alongside a 5cl miniature sample of the liquid, a piece of a Littlemill cask and a booklet containing the whisky’s tasting notes.

Priced at £2,750 per 70cl decanter, only 600 bottles of the whisky will be available worldwide.

Believed to have first opened its doors in 1772, Littlemill was at one time thought to be Scotland’s oldest licensed distillery.

After falling silent in 1994, Littlemill was destroyed by fire in 2004, although the remaining stills are now housed in fellow Lowland distillery Loch Lomond.