Christmas puddings across the UK will be going up in blue flames on 25 December, as has been the tradition for generations. This Christmas, however, will you be dousing your dessert in Scotch whisky or brandy? Tom Bruce-Gardyne referees the discussion. 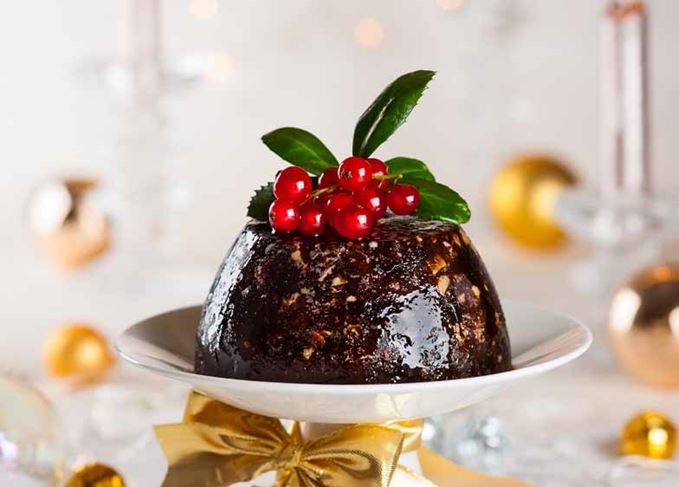 Festive dilemma: Do you pour Scotch or brandy over your Christmas pudding?

‘…Mrs Cratchit entered: flushed, but smiling proudly, with the pudding, like a speckled cannon-ball, so hard and firm, blazing in half of half-a-quartern [equivalent to a gill (144ml)] of ignited brandy, and bedight with Christmas holly stuck into the top.’

With these words from A Christmas Carol, published in 1843, Charles Dickens hammered out the template for Christmas dinner. The owner of a London sweet shop added crackers a few years later, while the fat, fur-trimmed Santa we know and ‘love’ today was first seen advertising Coke in 1931. Since then, very little has changed.

Why brandy? Well, because that was the pre-eminent spirit in Dickens’ day. In The Pickwick Papers – his first novel, published in 1837, brandy is mentioned over 40 times as the go-to drink in any tavern and a cure for all life’s woes. With his wine merchant in Boulogne, Dickens was clearly a Francophile when it came to drink. But, by the time he died in 1870, he had embraced Scotch whisky and left 17 cases in his cellar.

Whisky is no less flammable than brandy and, splashed over the pudding, burns just as prettily with the same blue flame. So is it time to kiss goodbye to brandy and a tradition that may not be as old as people think? Should we pour ourselves a Scotch Christmas with Hot Toddies all round? Who better to ask than Berry Bros & Rudd’s Ronnie Cox, who looks after Glenrothes, and Gwilym Cooke, brand manager for Britain’s favourite brandy, Three Barrels?

Let the debate commence: should Scotch replace brandy as the spirit of Christmas?

‘I grew up in a household where, for the last two generations, “brandy” had been a euphemism for “whisky”, so I never really believed people used brandy at all. I thought it was just a drink from the past and that people had moved on. I guess if you set fire to brandy it has a certain “glow to show”, you might say, versus the mightier whisky with its “flavour to savour”.

‘And, I suppose, lighting the Christmas pudding is one way to get rid of that old, half-opened bottle of Cognac in the cupboard, but if you want it to taste really good, you need to grace the pud with at least a miniature of a fine single malt like Glenrothes (a “mini” is 10cl for this noble distillery). The two deserve each other, especially if it’s a vintage pudding. And, of course, you should always create whisky butter instead of the old-hat brandy butter.

‘The fact that the alcohol used in Dickensian times was brandy is no great surprise. After all, it was considered the top spirit of its day before whisky was really on the scene. It was through the development of blends and the expansion of the railways that Scotch came south from the 1860s onwards. It then pretty rapidly gained a great reputation for being a gentleman's drink. So I reckon there's no doubt Dickens would have used Scotch whisky as his Christmas tipple, had he been born 50 years later.

‘More recently, there's been the rise of single malts which, with their sheer variety of flavour from smoky and oily to light and fruity, are much more interesting than brandy. The French certainly seem to think so, given the popularity of malts in France. In fact they drink over 10 times as much Scotch whisky as Cognac – so maybe they're trying to tell us something. They are clearly learning from the Scots in many things, even if they haven’t yet adopted haggis.

‘If 25m households in the UK had a Christmas pudding and were to set it ablaze with 10cl of whisky, I reckon it might be enough to fill an Olympic swimming pool with Scotch. It would obviously boost trade, but more importantly it would get whisky out of its wrapping paper and onto the kitchen table. There it could introduce its wonderful array of flavours to so many novices who hitherto had been unable to enjoy them because of some sort of stigma.

‘So I would advocate you join me with a historic salute to the brandy in your cupboard this Christmas and a warm “hello” to Scotch whisky in that most delicious of pairings: the Christmas pud.’

‘I think brandy plays an important role during the festive season for a couple of reasons. Brandy is an extremely sociable drink and that plays very well at Christmas. You will find couples relaxing in front of the telly with a glass of Three Barrels, to big social gatherings and dinner parties where brandy is drunk together after the meal – and there is no time that happens more than at Christmas. I also think brandy is recognised as a warming spirit that people reach for at this time of the year.

‘It’s a season that is hugely important to brandy in terms of sales. It’s the one time people at home will purchase it as part of the Christmas shop. So it’s really important for us as the nation’s most popular brandy for people to remember our brand.

‘In terms of the taste of Three Barrels, you’re going to find hints of almonds and walnuts, and a long finish with candied fruits and ginger – flavours that are clearly prevalent during Christmas. And, obviously, the traditional Christmas pudding has been synonymous with brandy for many years.

‘This year we’ve been doing a lot of work communicating the French provenance of our brand. Made in France and loved in Britain, Three Barrels has been produced since 1814. What we found, visiting south-west France and the Cognac region, is a growing trend for people to enjoy a brandy over ice with tonic and a dash of Angostura bitters. It’s just a refreshing take on the drink that plays to different occasions throughout the year, but I think the twist of bitters gives it a nice Christmassy feel.

‘This year there will be a new generation of brandy drinkers experiencing the spirit through family gatherings over Christmas, when they are introduced to it for the first time by parents and grandparents. It’s definitely a time when traditions are passed down between generations.

‘Whether it will endure – this tradition of brandy at Christmas – is down to the likes of Three Barrels. There are some interesting stories behind brandy and its provenance that many consumers are not aware of. So it’s about making sure we start to tell some of these stories in the same way whisky does, and to make sure we continue to be relevant.’

Of course there is room for both spirits around the Christmas table, but somehow Scotch could do more to join in the festivities. Christmas may cause a spike in its sales like Father’s Day, but you wonder how much is bought as a rather predictable present for dad or granddad. Not quite as uninspired as socks, but surely contributing to the ‘old man’s drink’ stereotype.

Meanwhile, brandy may have the opposite problem of being trapped in Santa’s grotto and forever associated with mince pies, brandy butter and the hoary old trappings of a Dickensian Christmas. In his books, the spirit was almost invariably mixed with warm water. Give me a brandy and tonic any day.

Both spirits are for enjoying all year round – rather like our four-legged friends. As the Chinese saying goes: ‘A dog is not just for Christmas – if you carve it well it will last well into the New Year.’