Can whisky go bad in the bottle?

It’s common knowledge that wine has a definitive shelf life once its cork has been popped, but what about whisky? Our Virgin hits the books to discover how to keep his Scotch stash from ‘going bad’. 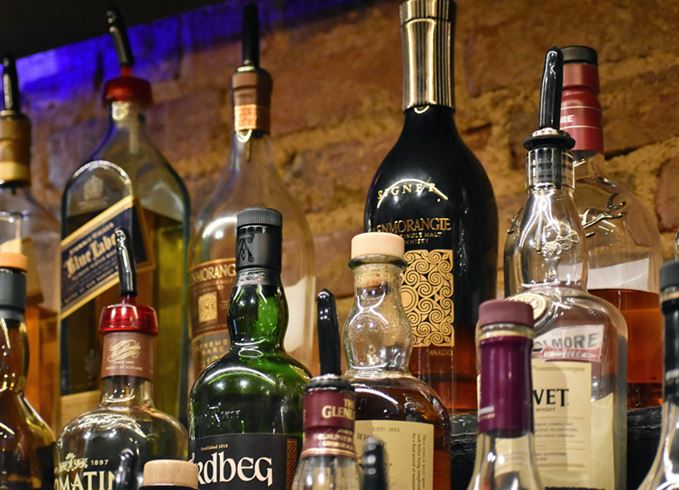 Open season: Whiskies can eventually lose flavour after that first dram has been poured

So I was at a tasting, continuing my mission to get whisky wise, when I heard a veteran Scotch-ist complaining their dram was no good. ‘The bottle has obviously been open too long,’ they said. Now, I’d never thought about the possibility that good whisky could go bad. I’d always just figured I could crack open a nice Scotch, enjoy a few drams, and then squirrel the rest away for later. But apparently it’s possible you can go back to a bottle that’s been open for a while and find the liquid inside has fallen apart like a cake in the rain.

Why did nobody warn me about this?

I thought about my own modest whisky stash. Should I have been keeping it in a special room or cellar to preserve its deliciousness? Would I miss out on peak whisky flavours if I didn’t finish my bottles in a speedy fashion?

Faced with the prospect that my favourite booze might be more fragile I’d thought, I raced back to the gaff to check on my collection and do some emergency research.

Back in my flat, I took a recently opened Scotch from the cupboard and gave it a long, concerned sniff. Seemed fine to me. It definitely hadn’t gone bad like a carton of milk or anything but then I’d only torn into it a few weeks ago. If whisky bottles come sealed up with caps and corks to keep their insides fresh then what happens when I start pouring liquid out and letting air in? Could that Scotch-ist be right – that after dram number one every bottle of whisky just gets slowly worse and worse?

Noticeable difference: A whisky’s aroma will gradually change as it is exposed to oxygen

After some initial research, things weren’t looking good. Lots of people out there in whisky land seem to think that time exposed to air can make your hooch taste different. Once you crack that seal, the alcohol content can drop as ethanol evaporates and strongly smelling Scotches such as big, peaty numbers can lose their intensity the longer they’re open. I was starting to worry I’d have to drink all the whisky in the house to avoid irrevocable flavour loss. Would I be up to the challenge? Only time would tell.

Word on the street is that hardcore whisky hoarders have been known to go to extreme lengths to fight flavour loss – spraying special gas into their bottles to keep the air out and sealing them up with lab-grade tape called Parafilm. I don’t like the idea of my hard-earned whisky getting past its best, but this hobby is already expensive enough for a cash-strapped millennial, so I’m not in a rush to drop extra dollar on gas and tape. Luckily, some Scotch fans suggest a low-tech solution for long-term preservation that involves decanting whisky from open bottles into smaller containers so it has less contact with the air and stays fresh for longer.

This is all good to know in case I ever decide to preserve half a bottle of Scotch for future generations like a malty time capsule, but I am left wondering if whisky in my house will actually have the chance to go ‘bad’. Flavours might change a bit in an open bottle but nothing I’m reading seems to say it happens overnight or that it will turn totally undrinkable. It’s not like I’ve ever managed to hold on to a bottle of whisky, open or closed, long enough to notice this happening so far.

Upstanding citizens: Whisky should not be stored on its side or upside down

But what if one day I decide to get serious about booze hoarding and grow my little Scotch stash? Even I know that whisky collecting is big these days and while I might lack the self-control and forward thinking to get on it right now, who knows what the future will bring? What does someone like me need to do to make sure a stack of delicious – and maybe even valuable – sealed whisky bottles stay in top condition? Do collectors with giant piles of vintage maltiness do anything special to stop the march of time?

The experts out there seem to agree that Scotch is tougher stuff than other boozes, such as wine, that need specific storage conditions. This is great news for me because there’s no way I’m digging a whisky cellar in the flat I rent above a non-franchise chicken shop. The big things to keep in mind seem to be not getting bottles too hot by leaving them in direct sunlight or next to the oven, and not storing them upside down or sideways in the wine rack, which can apparently damage the seal.

I also heard that the tightest of caps on the most collectible of bottles aren’t 100% perfect and can break down over time, even if you’re super-careful with them. The highly dedicated have been known to wrap the top of their bottles in Parafilm even when they’re unopened to stop a drop of their investment escaping and keep their precious whiskies absolutely perfect… Wow. I have to say, the idea of whisky being sealed up inside a bottle like that forever – even if it’s with the best intentions – does seem like kind of a bummer.

I get that Scotch is precious stuff and we want to enjoy it in its best possible condition, but I wouldn’t want planning for the future to stop me enjoying whisky in the present.

Seems to me the best way to stop my favourites going bad might be to drink them. It’s not like memories have a sell-by date, eh?