Passion has gripped our normally demure Whisky Virgin – could it be that love has come knocking at long last? And will it all end happily? Well… 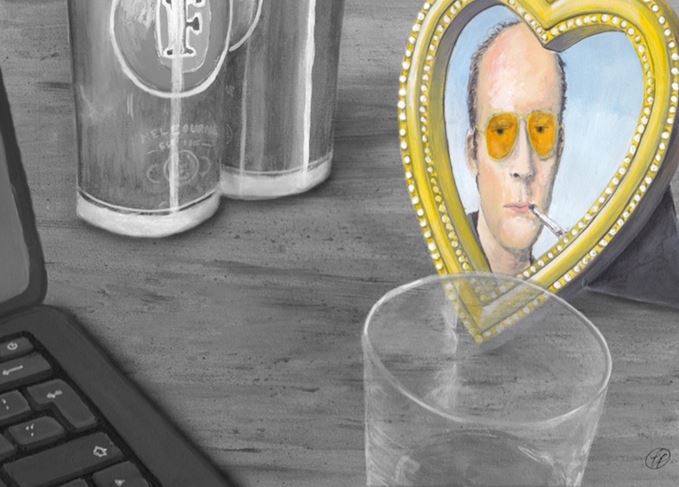 I am currently madly in love with the writer Hunter S Thompson. He was handsome, wore the most gorgeous of shirts and had a thing for guns, cigarette holders and Richard Nixon, whom he chased for decades, like a rabid dog.

I am especially fond of Hunter because he gave his body to science. He experimented on himself, sharing his findings in newspapers and books, great truths that have frequently helped me avoid certain people, places and liquids.

He’s the reason why I have never visited Las Vegas with my attorney, and why I find it difficult to look upon a bottle of Tequila with anything but deep foreboding. Here he is on the age-old problem of knowing in what order to drink your beer and whisky:

‘Beer on whiskey, mighty risky – Whiskey on beer, never fear. That is a rule I learned early, and it has always served me well. I don’t take credit for it, but will pass it along as truth. It has stood the test of experience.’

It’s a good piece of advice, I’m sure you’ll agree, and would work, as it stands, on just about anyone – except me.

Not to bore, I am the sort of learner that needs things spelt out, and one of the reasons why I adore Hunter is the fact that he really does spell stuff out. If you’ve read him, then you’ll know exactly what I mean. If not, here’s a teaser:

‘Maybe there is no Heaven. Or maybe this is all pure gibberish – a product of the demented imagination of a lazy drunken hillbilly with a heart full of hate who has found a way to live out where the real winds blow – to sleep late, have fun, get wild, drink whiskey and drive fast on empty streets with nothing in mind except falling in love and not getting arrested… Res ipsa loquitur. Let the good times roll.’

There’s something here for everyone, god-fearer, atheist or agnostic, country lover, car nut, classicist, Oddbins blurbologist, optimist, hifalutin’ lawyer. You name it, you’re here. It reads full, it sounds full, it is full, and so was Hunter. He spells it out. He says it as it is, in the long way, and I need that.

More the surprise, then, the dropped ball on the beer and whisky front, which in lacking his usual rambunctious level of evidential anecdote, and sporting not one, but two distracting and actual spelling mistakes, failed to save me and my brothers from a night last week, when a evening’s worth of drams and beer chasers saw me exiting a club with the insistent assistance of the gentlemen on the door, and then in the road, covered in beer, play-fighting with said siblings, and with three other revellers, who had arrived riding a Hoover. I woke up the next day unable to walk or think.

This is Hunter’s fault, clearly, though I can hardly blame him. He’s wonderful, and I will always love him.

Still, my bruises are yet to fade, and as punishment, Huntie, I’m not going to finish your book of letters until, well, next month. In the meantime, dear readers, remember: when giving advice, don’t spare the detail – and watch those spellings.