Bunnahabhain’s impending £11m makeover was the topic of conversation at the distillery’s Fèis Ìle open day, finds Becky Paskin, while those making the journey to Islay’s north-east coast took the opportunity to stop in at the neighbouring, soon-to-open Ardnahoe distillery. 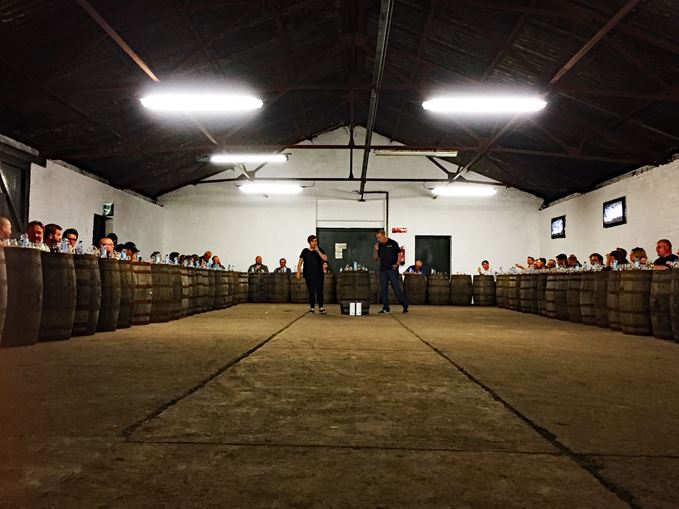 The approach to Bunnahabhain has one of the most beautiful views on Islay. From high up above the distillery’s village, you’re rewarded with vistas across to the Paps of Jura and down to the Sound of Islay, while the descent provides a spectacular view of Bunnahabhain’s mighty pier standing serenely in the glistening water.

The ‘scruffy’ distillery fondly known as Islay’s ugly duckling opens its doors on the penultimate day of Islay Festival and, despite being a long drive from pretty much anywhere, always draws a good-sized crowd.

Bunnahabhain’s main attraction is the annual masterclass hosted by distillery manager Andrew Brown and senior blender Dr Kirstie McCallum in the filling store. Featuring a range of cask samples, the class is a testbed for future Fèis Ìle releases, as well as for new expressions from Bunnahabhain due for release over the coming year. ‘A few of these may become future limited editions,’ Dr McCallum told the room. ‘So please get involved and let me know what you think.’

Among the six samples were this year’s festival bottlings – the unpeated 2002 Spanish Oak Finish, which has spent five years in an ex-brandy cask (£250), and the peated 2007 Moine Oloroso Matured (£95).

The samples also included a new expression released as a distillery exclusive, a 2012 Bunnahabhain finished for six months in American IPA casks. The first beer-finished whisky from the distillery, and one of only a handful of Scotch single malts matured in ex-beer casks, the expression is a small batch test for a potentially larger roll-out later this year. A similar expression has also been created at Deanston distillery, Bunnahabhain’s sister site in Doune, near Stirling, which has been finished in ex-stout casks.

Having the distillery manager and senior blender conduct a class side-by-side generates a more rounded experience – you’re in a position to soak up the knowledge of two people in control of different parts of the process. ‘Up to 70% of the flavour comes from the wood, but you’ve got to have a good new make spirit,’ Dr McCallum said. ‘It’s a balancing act.’

The class is always a major highlight of Bunnahabhain’s open day, but elsewhere visitors were also taking part in warehouse walks, boat tours of the Sound and range tastings with various members of the distillery team.

From early morning, two tall ships had rolled into the bay, providing a picturesque backdrop – fitting, considering Bunnhabhain’s maritime positioning – and a talking-point among visitors, although the focus was on gaining and holding a spot in one of the many long queues for pizza, lamb wraps or distillery bottlings at the visitor centre.

As the shuttle buses dropped off more and more people, the growing queues quickly became tangled and indiscernible from one another. It wasn’t uncommon to start queuing for a pepperoni pizza and find yourself buying a whisky instead.

The other major topic of conversation was the distillery’s impending £11m makeover, which will improve the visitor experience and increase warehouse space on-site. Knowing that various elements of the distillery would be knocked down and rebuilt elsewhere led to a sense of premature nostalgia as everyone realised that Bunnahabhain would look entirely different at next year’s Fèis Ìle.

Just up the road, a second project is also undergoing construction work, as Hunter Laing’s Ardnahoe distillery nears completion. Throughout the week, the distillery team, led by manager Fraser Hughes, accompanied visitors on scenic walks around the outskirts of the distillery site.

Although the distillery is not yet open for visitors, those stopping by for an impromptu update on how the build is progressing were treated to spectacular views of Ardnahoe and its outlook on the Paps of Jura and the Sound.

Running slightly behind schedule, it’s expected that the distillery will be ready for production to begin at the end of the summer, with the site opening to visitors soon afterwards.

With a ‘huge’ retail space, 60-cover restaurant and a daily private table in the still house, which looks out on Jura, Ardnahoe is set to become one of Islay’s main distillery attractions. With Bunnahabhain planning its own upgrade, the north-east coast of the island is about to get busier.

We headed down to both sites to find out how the projects are coming along, as well as to taste this year’s Bunnahabhain Fèis Ìle whiskies with senior blender Dr Kirstie McCallum: