Recently appointed lead blender for Burn Stewart’s Scottish Leader, Dr Kirstie McCallum has travelled the world on her whisky journey. She spoke to Melita Kiely about accidentally stumbling into the world of whisky, her passion for motorsports and what she’ll be sipping this summer. 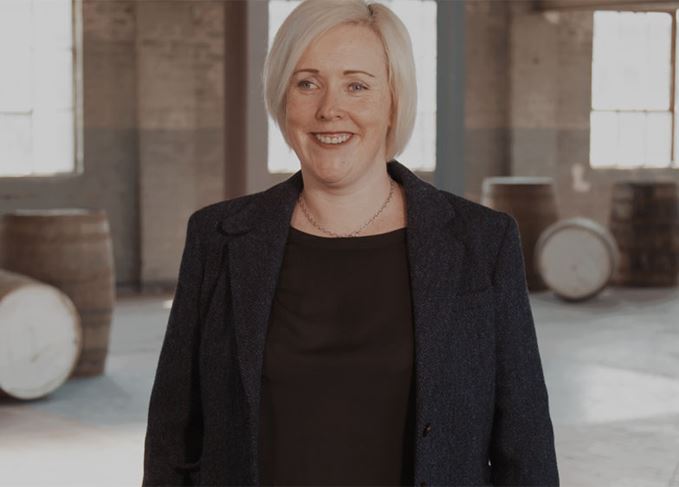 A twist of fate: Dr Kirstie McCallum originally had no intention of working in whisky

‘I actually got into the whisky industry by pure luck. I’m a chemist and I’d always wanted to work for a pharmaceutical business and work on cancer cures, or something similar. I was told if I wanted to go far I would need to have my PhD. But when I left university, there were no jobs in the pharmaceutical industry.

‘While I was looking for a job, I was offered a temporary position with a grain distillery in Glasgow, Port Dundas, and I fell in love with the industry. I started off in the labs basically looking at the production side of things. I was just completely taken by the whole tradition of whisky making, the history, the fact you come into work and people know who you are, and everyone’s really friendly.

‘I found out I had quite a good nose and started to train up my nose and palate. I went to work for Chivas Brothers as a quality analyst on blends. But they had rums as well, so I was working across rums and blends. After about a year-and-a-half, I was promoted to lab manager up at Glen Keith distillery.

‘After working for Allied Distillers for a few years analysing their spirits, I got a job as blender for Burn Stewart. I went from blender to global brand ambassador after a few more years in order to develop my knowledge. It was a fantastic opportunity to learn more about what people want, what’s happening in the world and get more consumer knowledge, which I couldn’t have done from the lab.

‘As an ambassador, I got to see places I probably would never have had the chance to visit otherwise. I travelled everywhere: South Africa, Moscow, Canada, the States, Russia, Scandinavia – so many incredible places. I absolutely loved it; Finland is one of my favourite countries of all time – really fun with great people.

‘I definitely have a few tales to tell, such as the time when I fell off a train in Russia! I took an overnight train to Kazan; it was February and there was several feet of snow. As the train pulled in it couldn’t get into the platform, so they stopped it early and everyone had to climb down these ladders on the outside of the train. I was loaded with my bag, a suitcase and ambassador kit, lost my footing and went flying into the snow face first! It was so embarrassing at the time, but now I look back and it makes me laugh.

‘Now that I’m senior blender for Burn Stewart I don’t get to do as much travelling as before, but I am doing what I really love now. What really surprised me while I was travelling as an ambassador, though, was people’s love for Scotch whisky. I knew people loved whisky, but it’s something that’s really grabbed people; they want to know more about it all the time. I found it fascinating.

‘My other great passion outside of whisky is motorsports. I’ve been into motorsports for around 15 to 20 years. I go to Finland every year and I’ve been to carry out tastings for some of my favourite idols. I held a tasting for [Finnish rally driver] Tommi Mäkinen, which was totally out of this world.

‘These days we are seeing an awful lot of younger people coming into the Scotch whisky category. I am not one of those people who advocates women for whisky – whisky is for everybody, it’s simply a case of finding the whisky you want to drink.

‘Scotch has become more open to people, whereas in the past it’s been seen as being a little bit elitist. Now there’s more of an understanding that you don’t have to drink it a certain way – it’s your whisky, so drink it however you want: mix it, add ice, it doesn’t matter. There should be no barriers.

‘It’s been really positive to see more women come to the forefront of the industry, but there have always been a lot of women working in whisky, especially in the labs.

‘Diversity is definitely the most exciting part of my job; not one day is the same as the next. There is never a typical Monday to Friday; one day you can be doing tastings, the next you’re developing a new product. I love doing consumer tastings; it’s great for me to share my passion with people who enjoy whisky as much as I do.

‘I’m Scottish born and bred and my dad’s a big whisky fan – he likes a nice whisky. I have always drunk whisky – maybe not single malts, but whisky and Coke – and that influence definitely came from my dad. But I don’t have a favourite; I tend to drink my whisky depending on my mood. Though I do love Bunnahabhain; you can drink it anytime, anywhere. And I like single malts, but I so enjoy blended whisky. If it’s a sunny day I’ll have a Scottish Leader with ginger beer and lots of ice.

‘There are a few people I look up to in the industry. David Stewart [at Balvenie], obviously – he’s totally iconic. Nobody is more of an inspiration to people in our industry. Colin Scott, master blender at Chivas Brothers, is a real character who’s inspirational.

‘In December I have a great trip planned to Sweden to host a tasting of vintage blends from the ’60s, which I am really excited for. It’s a brilliant time to be in the whisky industry.’