Gordon Buchanan: wildlife, whisky and me

Throughout 20 years of travelling the globe as a wildlife cameraman and presenter, there have been two constants in Gordon Buchanan’s professional life: an endless curiosity about the natural world – and Scotch whisky. As the BBC prepares to screen a number of his programmes over the festive period, he speaks to Dave Broom. 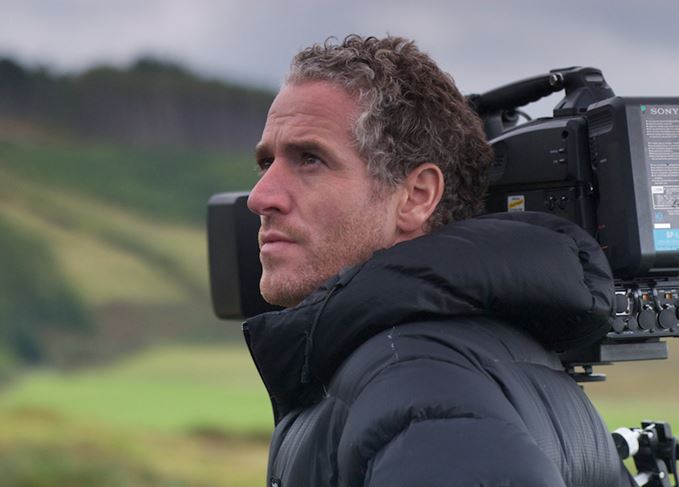 ‘We were in Papua New Guinea on a six-week expedition and reckoned that one bottle a week between the crew would last us ok, but we must have been too liberal one night, and we ran out. So there we were, sitting there on an extinct volcano, lamenting the fact that we’d not have a drink for three days until we were back in Port Moresby.’

As a whisky story, that’s up with the best of them. It has all the trappings of a tall tale, unless it’s being told to you (over a cup of tea) in a Glasgow bar by award-winning wildlife presenter/cameraman Gordon Buchanan.

I knew he was a whisky lover, but this passion for the cratur was a surprise. ‘When I started working, I’d take three cases of home comforts with me: cassettes, books, food, chocolate biscuits, but no booze. Now, I’ve got it down to two essential items: coffee and whisky. In fact, this year I dispensed with the coffee.’ He laughs. ‘You’ll put up with any discomfort if you know there’s a dram at the end of the day.’

But what of the volcano story? ‘Well… as I was packing ready to leave, I upturned my grab bag and out fell two sachets of whisky that my brother had given me. That stuff was like nectar.’

Over 20 years, Buchanan has travelled the world, filming in remote areas. Most recently, his BBC television series …Family and Me, which puts him close – sometimes alarmingly so – to animals, has made him a household name.

This Christmas, there’s a Buchanan-fest on the BBC, with repeats of Gorilla Family and Me, and Tribes, Predators and Me; and two new programmes: Elephant Family and Me and Life in the Snow.

Question is, how does a boy from Mull end up being inside a pod while being gnawed by a polar bear (one of the most alarming pieces of footage I’ve ever seen), or with an Arctic wolf sniffing his boots? It’s hardly your average career path.

‘I didn’t study at school at all. Until I was 15, I wanted to work in a showjumping stable and dreamed of being an international showjumper. I was taken with the idea of travelling, but I had to find my own way out of Mull.’

It was when he was working in the kitchen of Tobermory’s Captain’s Table that he met the owner’s husband, legendary wildlife film-maker Nick Gordon. ‘I felt exotic just knowing him!’

What started with a suggestion from his new mentor that he get back to school with an aim to take a degree in zoology ended up with Gordon offering him a job as his assistant on an 18-month trip to Sierra Leone. ‘I went into school the next day and said: “I’m leaving.” Never went back.’

Buchanan spent five years with Gordon, including a legendary trip to Brazil where they ate roasted tarantula (washed down with Champagne) in an Amazonian Indian funeral cave.

Freelance since 1995, it was only when he signed up for the first of the Lost Land series and found that it involved having to speak that he took presenting seriously. ‘I realised that this is a skill you can develop and is a profession in which you can hone your skills at becoming a better communicator.

‘For first half of my career, I was selfish. I did it for myself because I loved travel, and having a camera was a way of justifying it, but I realised that it’s my duty to be the conduit for people who would never have the opportunity to see these things.’

Armed with your bottle of whisky…?

He grins. ‘Whisky offers the most effective weight-to-effect ratio. A hip flask can cheer up five people in 10 minutes. It’s become this thing I do.’

Although his mother and stepfather worked at Tobermory distillery, as did his brother Stewart (now global brand ambassador for BenRiach), his whisky tastes are catholic. ‘On a trip I’ll buy a bottle to share and one for special occasions,’ he says.

‘The sharing could be Black Bottle, which I really love, or Marks & Spencer Islay malt. Something special would probably be Islay – most likely Ardbeg and Bunnahabhain, but I’m not attached to one brand. It’s the quality of the enjoyment which is infinitely higher.’

That enjoyment could be obtained by drinking Famous Grouse in Alaska with 10,000-year-old ice hacked off a glacier, or sipping Bunnahabhain in the Serengeti night surrounded by lions. ‘That was  a special moment, just me and the guy running the camp. All the stars were in alignment. That whisky tasted spectacular.’

Keeping his cool: Buchanan’s trips take him into close proximity with some intimidating beasts

These expeditions are often solo, or with a small team. Are you a loner?

‘I suppose so. I don’t get people who don’t want to spend time alone ever. I like being around people, but I have no problem with spending large amounts of time on my own.’

It must also be important to be patient?

He pauses. ‘It’s not even that. It’s being optimistic. Most patient people will lose their patience because it has a time limit. You can sit optimistically for a far longer period of time!

‘I once spent 30 nights in a hide in India filming leopards. Every night I would learn a little more about them, even when I didn’t see one. It felt a real achievement getting to know the things that cat didn’t want me to know about its life.’ He grins. ‘The midnight hipflask helped.’

When did you stop being selfish?

Perhaps it is due to the solo nature of his work, but his films are not burdened by artifice. Instead, they establish a direct and often visceral link between you; the man speaking; and the animal. You are no longer one step removed – a problem with many wildlife documentaries – but are involved.

Single-handed: The nature of Buchanan’s work means that he is often working alone

‘The wonderful thing being a presenter is you get feedback,’ Buchanan continues. ‘I once did a film in the North Sea about orcas. On the last day we had 100 whales following the mackerel boats – just the sea, the sky and those black fins. A man came up to me soon after and said: “Thank you for doing that for me.” I was touched by that. It’s an honour to be … an emotional surrogate.’

His recent series Into The Wild with Gordon Buchanan also had that quality. On paper, it looked trite: taking a celebrity into the British countryside to look for animals. Instead, the films were compelling because the guests, often far out of their comfort zones, were enthralled, and opened up about themselves.

Whisky seemed to play a significant part in most episodes. He laughs.

‘The best was with [BBC world affairs editor] John Simpson in a bothy in the Caledonian pine forest. He’s one of the most interesting men you could ever meet. I got the fire going, and over a bottle of Talisker he told me of his life. When I see Talisker, I think of that moment. It’s what whisky does – reflect the moment.’

Is the work more than simple entertainment? ‘I’d like these programmes to have maximum impact about conservation, but it’s TV. The new series on elephants is uplifting. I could make a film about poaching, or loss of habitat, but no-one will watch it. You have to make people listen and get those messages across in a positive way.’

And how is his optimism with regard to the environmental situation?

‘There has to be a global shift to re-engage with the natural world. Caring isn’t enough. Take elephants. They are number one seed dispenser across Africa. If you remove elephants, all the other animals will go as well, and it will be a desert. We have to engage with it and everyone has to do all they can.

‘I want another 40 years on the planet, and to know at that point that I did all I could to help. I wouldn’t want my kids and grandkids to say: “You had the opportunity to do this, but it’s gone to pot.”

‘I really do think it will get worse before it gets better. We have to be over the edge before anything lasting will be done. That’s a sad fact about human beings.’

So can we be in any way hopeful? ‘It’s not unstoppable. We’ll get to the point where we have to draw a line in the sand.’

Getting close: Buchanan believes that we need to ‘re-engage’ with the natural world

Does part of teaching mean not just using fewer resources, but engaging with your own backyard? He nods. ‘We cannot preach to any other nation about protecting what they have if we have destroyed what we once had. It depresses me that the classic Scottish image of windswept moors devoid of trees – the whisky image – is actually a desert! We need to restore and revive these wild places.’

‘We don’t use the land in the same way as we once did, so if you want to do the most amount of good for the most people and most amount of species, then rewilding is the only thing to do, though the politics is difficult.

‘Rewilding would enrich not just the country, but communities. It makes economic sense – the sea eagles on Mull bring in £3m a year.’ He pauses. ‘I would love to hear a wolf howling in the Highlands before my days are done.’

‘I’m embarrassed that there are places in Scotland that I haven’t been to. People ask me where I want to go to next, and I say Knoydart, or north of Inverness… Fife! I’m happier out on Loch Lomond than I am exploring some lost river in a rainforest on the other side of the planet.’

Buchanan had talked earlier about how, at the end of each day filming Elephant Family and Me, the crew would go to a rock overlooking the plain. He’d pull out the hip flask and some cups, and everyone would gather round. ‘It was a communion of sorts, a punctuation mark at the end of the day, the point where work stops and conversation takes interesting tangents. That’s what whisky does.’

It’s what he does as well: bringing people together, recreating that space where they can marvel, think and listen.