Irish whiskey: a question of provenance

As Irish whiskey continues its renaissance, the issue of where – exactly – the liquid is coming from is beginning to rear its head. Are some companies being economical with the truth, or outright deceptive? Dave Broom investigates. 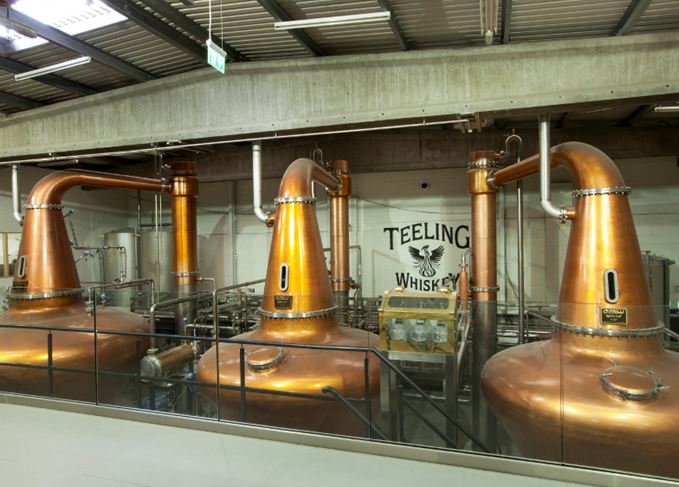 A decade ago, there were four distilleries in Ireland – Midleton, Bushmills, Cooley and the then just reopened Kilbeggan, also owned by Cooley. Those four have since been joined by 14 new plants: Dingle, West Cork, Great Northern, Blackwater, Connacht, Echlinville, Teeling, Waterford, Walsh, The Shed (Drumshambo), Tullamore, Pearse Lyons, Slane Castle and Rademon Estate. If all goes to plan, a further 14 will join them. It has been a remarkable turnaround.

The range crowding the shelves in bars and travel retail would suggest there is anywhere between 60 and 70 new brands, mostly consisting of sourced whiskey.

Of the big three, Midleton and Bushmills only supply to a limited number of brands, while West Cork is also now releasing some liquid. The bulk of the sourced whiskey appears to be from the Cooley stock which John Teeling retained after he sold the distillery to Beam Suntory, plus a decent-sized (but rapidly diminishing) parcel of old Bushmills stock which he also holds. His Great Northern distillery (GND) is also now supplying fillings to third parties.

According to Jack Teeling, there has been a healthy secondary market in Irish whiskey since Cooley was established, from 1990 onwards. In the last two years, he claims, the Beam Suntory-owned Cooley ‘has opened up the taps again after closing down much of its third-party supply business in 2012’.

Some new distillers are using this sourced whiskey as a stop-gap until their own stock is mature, while others may well continue to buy in after that point, depending on their own capacity, style and sales projections. After all, inter-distillery deals are nothing new – the Scotch whisky industry is built on a similar format.

Pearse Lyons, whose Dublin distillery has recently opened, is a case in point. As head distiller Dr Gearóid Cahill says: ‘We have launched four whiskeys, some as very limited editions, and will be introducing new whiskeys, including a five-year-old malt whiskey that is 100% from our stills, in the coming year. We used these [stills] a number of years ago [presumably in the firm’s old Alltech distillery in Carlow]. We don’t make grain whiskey, so we will be sourcing that.’

As well as distillers using sourced whiskey, there are bottlers (or ‘whiskey bonders’ in the Irish term) doing the same. While this parallels what is commonplace in Scotch, the issue in Ireland is whether the provenance of many of the new bottlings is being made obvious. And, if not, whether consumers are being deceived.

Talking point: Hyde 10-year-old single malt has been at the centre of a heated debate

In recent weeks, the debate has centred around the claims of Hyde 10-year-old malt whiskey, which was sourced from Cooley, but claimed to be from West Cork (where it was finished for a few months), had two ‘master distillers’ and was produced by Hibernia Distillers – which many felt inferred that the firm had a distillery (which it doesn’t).

Hyde may have received the most flak, but it is not alone. Peter Mulryan owns Blackwater distillery and is the author of The Whiskeys of Ireland. ‘These days,’ he says, ‘everybody wants to be a distillery. It’s ironic, as the way we used to sell whiskey was through bonders but, coming from a monopoly, then a duopoly, we have no modern culture of independent bottlers.’

Louise McGuane owns Chapelgate in County Clare. She bought the lapsed trademark of local bonder JJ Corry and is releasing whiskeys under that label, but declaring that the liquid has been sourced. Despite this, she says she is still being accused of being another ‘Cooley clone’.

‘It is becoming a real problem for me, although when it happens I have an answer,’ she says. ‘I am currently the only whiskey bonder in Ireland who says that I am. Others choose not to reveal that, as they feel the fake provenance thing is more valuable.

‘Ireland has a long heritage of whiskey, but that heritage has a broken line. It’s easy for people to just pick up lost brands and put them out there.’

The Irish Whiskey Regulations and geographical indicator (GI) rulings define the types of whiskey which can be produced in Ireland: its strength, contents, registered address, etc. Many feel, however, that the current regulations do not go far enough and that there is a lack of direct accountability in administering them.

‘Again, this goes back to the monopoly days,’ says Mulryan. ‘There was no need to police IDL as it only released a new whiskey every blue moon. Nowadays it has all changed, but there is nothing in the 1980 legislation, or the subsequent GI, that addresses provenance.

‘Also, while the Food Safety Association of Ireland is responsible for labelling issues, any breaches are passed on to the Environmental Health Officers of the Health Service Executive. These are the lads who close down restaurants, or check to see how clean their mop is. They have no idea what they are doing.’

As it stands, ‘Irish whiskey’ consists of distillers with mature stock; working distilleries without mature stock using sourced whiskey, but using their distillery name on the label; and yet-to-open distilleries doing the same.

Stop-gap: Some companies are using third-party whiskey until their own stocks reach maturity

Ireland is facing the same scenario that has bedevilled the new American whiskey industry. There, some distillers sourced their liquid (mostly from private label distiller MGP of Indiana), but then omitted to reveal that fact. The resulting consumer backlash over sourced whiskey has, many feel, tarnished the reputation of all new producers.

The central issue in Ireland is whether you should be able to say ‘distillery’ or ‘distiller’ on the label if all of the whiskey doesn’t come from that place. Some bonders/distillers claim that, as they have signed an NDA (non-disclosure agreement) with their supplier, they cannot reveal the source of their whiskey.

Should there be tighter controls on labelling? If a distillery is mentioned on the label, should 100% of the stock come from that place? If someone calls themselves a ‘distiller’, should they be producing whiskey?

Conor Dempsey, spokesman for Walsh Whiskey, says: ‘As the sector expands at pace, there is a lot being done on a range of things, and labelling is one of them.’ He adds: ‘We believe there is a need for increased regulation in this area.’

What could the regulation look like? In the Scotch Whisky Act, the issue of provenance is covered in the following clause:

7.2  Regulation 9(4) also makes it illegal to label, package, advertise or promote any Scotch Whisky in a way which is likely to deceive the public into thinking it has been distilled at any distillery other than the true distillery...

7.6  Each brand owner must assess whether there is any risk that consumers may buy his Scotch Whisky in the belief that it comes from a distillery, or a distiller, other than the true one. If such a risk does exist, the brand owner should take corrective action. There are various ways in which the risk of deception can be avoided. For example: the most obvious way is to avoid the use of brand names, and company or trading names, which may be taken by consumers to be the name of a distillery (when they are not); if a brand owner has an existing, well established, brand which falls into the ‘danger’ category, one way of preventing any confusion would be to state clearly on the label and packaging the name of the distillery where the Single Malt Scotch Whisky or Single Grain Scotch Whisky was actually distilled.

Opinion is divided as to whether a similar clause should be adopted in Ireland. David Havelin from the Liquid Irish blog says that while he is ‘always keen to know more about the whiskey I’m drinking, I wouldn't mandate the disclosure of any further information on labels’.

He adds: ‘There are plenty of fine Irish whiskeys that don’t or can’t (for contractual reasons) declare liquid source and it really doesn’t matter. They’re a useful stepping-stone for new distilleries who have enough to explain to consumers without throwing in a confusing sourcing story.’

While Jack Teeling doesn’t think there is very much difference in the Irish labelling rules and regulations compared to Scotch, or what is allowed in the US, he adds: ‘This warrants discussion. If there are blatant attempts to mislead consumers, then this needs to be dealt with and, as a member of the IWA Protection Committee, any labelling issues have been tackled head-on whenever they have been brought to its attention.’

Dr Cahill of Pearse Lyons speaks for the majority of other producers and commentators in saying that the matter is ‘worthy of consideration’.

‘There has been a lot of work undertaken to establish the regulations associated with the GI status of Irish whiskey in order to protect the category,’ he adds, ‘and to clearly lay down the requirements for the production of same.’

Leslie Williams is a Dublin-based drinks writer who has written extensively on the subject of sourcing and the lack of transparency. ‘Those Scottish regulations would be an excellent start,’ he says. ‘Although it would still take a few years to get the current rules changed, that doesn’t mean we shouldn’t start today.’

The issue of who polices those new regulations is also up for debate. Dr Cahill feels that the Irish Whiskey Association (IWA) would be the right body, as it ‘has representatives from almost all whiskey manufacturers and is an ideal forum for such matters’.

Dempsey sees it differently. ‘This is ultimately the remit of the Irish Government to decide. As far as Walsh whiskey distillery is concerned, we just want it be done in an efficient and fair manner.’

Others claim that the IWA is, in its current guise, more of a promotional body rather than the Irish equivalent of the Scotch Whisky Association. As Ivor Deane says: ‘There is no appetite from the majors to go anywhere near this. The law as it stands is there to protect Irish whiskey against foreign invaders and to promote huge growth. There’s also little impetus from commentators to touch this.’

For Jack Teeling, the issue is less about potentially confusing labelling, and more about quality and variety. ‘I think most issues that have arisen have been due to new entrants who didn't have any industry expertise doing something they felt was correct rather than blatant attempts to bring the category into disrepute,’ he says.

‘As the category evolves, there will be a need for more oversight and, as an industry, I believe attempts are being made to do so. My issue with all the new releases is that they are all the same and lack any distinctive character or differentiating factor.

‘We must continue to evolve for changing consumer tastes to ensure we achieve the full potential for Irish whiskey, and also ensure that we can respond to these changes in tastes, rather than be shackled by too many rules and regulations.’

Havelin is equally laissez-faire about the labelling issue. ‘I don’t like outright deception, but I don’t have a problem with omission of detail,’ he concludes.

‘We are in a transition period. In 15 years’ time, the need for this will have passed and it will be in the interests of these same distilleries to boast how all of their output is made by their own hand. That kind of noise will generate its own pressure on brands that don’t declare origins, ingredients, age or production methods. Those who care about what they are drinking will listen.’

Until that happens, whether the mix of messages consumers are hearing currently remains confusing or deceptive remains up for debate.