How whisky tourism is transforming Scotch

Making whisky is no longer the only concern for many Scotch distilleries. With visitor centre numbers at an all-time high, Felipe Schrieberg explores how the global popularity of whisky tourism is giving birth to a new generation of distillery – one that puts the visitor experience first. 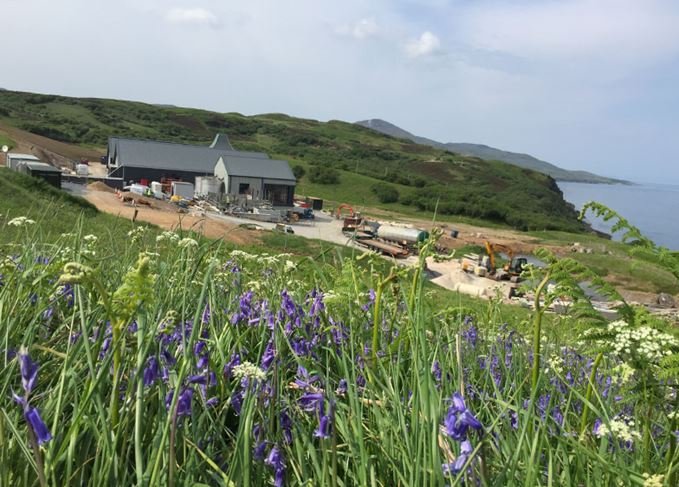 Tourist-friendly: Ardnahoe distillery, which opens later this year, will prioritise the visitor experience

The nearly completed Ardnahoe distillery, set on a bluff overlooking an unbeatable view of the Sound of Islay, is a unique place that perhaps represents the future of whisky tourism in Scotland.

For a relatively small facility, a large amount of space has been developed to accommodate future visitors, and eventually will incorporate a café-restaurant, bar, tasting room, gift shop and viewing balcony. It’s representative of a new generation of whisky distilleries designed and built with the visitor experience as a priority – considered, perhaps, almost as important as the distillery operation itself.

This is the reality currently sweeping through the Scotch whisky industry. Whisky tourism is booming as never before, and distilleries and brands are in the process of transforming themselves to adapt to this growing market.

For many facilities across Scotland, it has meant building or renovating their visitor centres. ‘In the last five years, distilleries have invested over £500m in creating world-class tourism experiences for visitors,’ says Graeme Littlejohn, deputy director for strategy and communication at the Scotch Whisky Association (SWA).

‘This includes investments such as Macallan’s new £140m visitor distillery centre in Speyside, as well as the recently-opened visitor centres in the Isle of Raasay distillery and Clydeside distillery in Glasgow, to name just a few.’

The evolution of this tourism market has been relatively recent, however. Though there is a rich history of distillation in Scotland over hundreds of years, it wasn’t until the 1960s that tourists could visit distilleries.

That’s when Glenlivet, Glenfarclas and Glenfiddich launched the first distillery visitor centres to deal with pesky tourists interrupting operations as distillery staff had to suspend work to show them around, while other distilleries on the Malt Whisky Trail in Speyside opened their doors in 1972. By 1999, 44 distilleries had installed visitor centres.

Today, the SWA says more than half Scotland’s 123 distilleries have one. But the phenomenon has moved beyond distilleries. Other elements include new and larger whisky festivals – the National Whisky Festival hosted by music event Celtic Connections, for example – whisky tour companies and whisky schools.

The scale of tourism projects is expanding too. In addition to Macallan, Diageo will soon construct the industry’s largest whisky tourism facility, spending £150m on a Johnnie Walker experience centre in Edinburgh, in addition to renovating 12 of its distillery visitor centres, hoping to emulate the success of similar locations showcasing Guinness beer and Jameson whiskey in Dublin (the latter welcomed 350,000 visitors last year).

Cristina Diezhandino, Diageo Scotch category director and managing director reserve, explains how the company is prioritising its visitor experience: ‘Our visitor centres are a special platform for us to engage, entertain and educate guests directly – whether they are brand adorers or just curious about whisky,’ she says.

‘Accordingly, our staff focus much more on the visitor experience, ensuring that our guests feel their time with us is well spent. They see TripAdvisor feedback as more important than sales results or traditional retail KPIs, as sales from the retail shop are seen as a side bonus.’

The Scotch whisky industry is learning what other drinks industries already knew: it’s all about providing unforgettable experiences, steeped in history and knowledge, and creating visceral connections with the brands (Jameson’s Bow Street whisky tourism centre boasts that it ‘facilitated’ four wedding proposals in one year), and with whisky itself.

After all, there is a reason why more whisky fans are trekking to distilleries instead of simply spending their money on more bottles. So what does the new emphasis mean for future visitors?

For the SWA, it translates into greater co-ordination with regional tourism boards such as Visit Scotland, government bodies and local communities to create a manageable system for the growing number of tourists. For distilleries, it means creating unique, innovative opportunities that can’t be found anywhere else.

For example, the Blair Athol distillery (owned by Diageo) recently built a whisky tasting bar in an old mash tun, and saw a 23% rise in the number of visitors for 2017 to 86,019, making it Diageo’s busiest visitor centre.

Expect more interactive and hands-on experiences, and more contact time with visitor centre and distillery staff. Though distillery tours and warehouse tastings are still the bread and butter of a visit, you may see more features on offer, such as cocktail classes (already popular staples at smaller, craft American distilleries and also at Jameson), blending workshops and multi-sensory experiences in the style of Beefeater gin’s ‘smelling station’, where the gin’s botanicals are on display, available for your nosing pleasure.

In short, the story of Scotch whisky will now be complemented with interactivity and engagement.

Diezhandino believes that whisky brands must use the same approach as the luxury industry ‘With the desire for experiences and emotion gaining more significance in the luxury industry, I expect to see “being” or “feeling” becoming equally as important as “having”,’ she says.

This means that the visitor centres and whisky tourism businesses at the forefront of this new approach will be thinking hard about how to best engage with tourist customers.

There is a display at the new Macallan distillery that reflects the near-spiritual approach to whisky that the industry is fast adopting. An exhibition called Peerless Spirit levitates a single drop of liquid before the eyes of the viewer before it sends out a wave of white light, illuminating a beautiful display of Macallan bottles. It’s likely to be a huge hit.