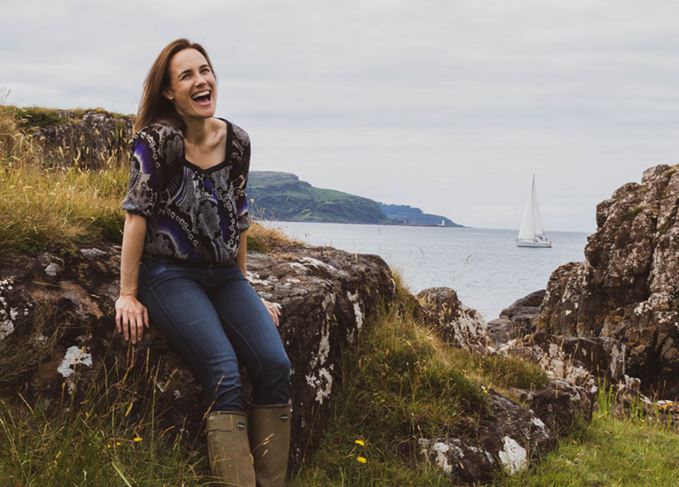 ‘The original idea for Ncn’ean came from two places: one, that I love whisky and I always had a connection with Scotland through my family. But I also felt like there was an opportunity to do Scotch more sustainably and more creatively, and that was what I wanted to achieve.

‘When we first started building the distillery we found loads of obstacles [on our journey] towards sustainability, and we’re still encountering them. The thing I realised is that it is definitely a “journey” rather than an “end goal”.

‘Most of the energy we use in the distillery comes from our biomass boiler, which we wanted to use as we have a source of timber literally right next to the distillery, and we wouldn’t then carry any road miles in getting fuel to us. It took us a long time to get the set-up of the boiler right for distilling; they prefer to operate continuously, whereas we only have one distillation shift a day. We spent a total of nine months tweaking it to get it working as we wanted, which was unexpected.

‘Sourcing organic Scottish barley was more difficult than I expected – there’s actually not that much of it. Not only do you have to find the barley, but you also have to find a maltster who is certified to process it.

‘There’s also all the smaller things we’re now working on, like trying to find more sustainable cleaning products for the distillery. Most people use caustic soda, which is not good in many ways, so we’ve been working hard to find an alternative to that. We’re making sound progress, but it’s not easy.

Sustainably fuelled: Ncn’ean uses woodchips from a nearby timber forest for fuel

‘Ncn’ean botanical spirit was the outcome of lots of different developments we did with our new make spirit. We’re in this beautiful part of remote, wild Scotland, and we have fantastic plants growing all around us.

‘There aren’t many distilleries in Scotland that are working on botanical spirits, but I hope more do. With ours for example, we hope that it’s drunk more like a gin, with a tonic. We also hope that it opens people’s eyes to drinking whisky in a different way.

‘The botanic spirit category is obviously very small at the moment, and the vast majority of the public still don’t know what it is. I hope at the most basic level it will grow. It’s interesting because people understand gin, and maybe this category will give them something more original to drink.

‘It’s too early to start educating people on these spirits, however. The category is still being designed by those that work in it and needs to develop further before we can say to a consumer “this is a botanical spirit”. That’s a challenge that we in the industry will have to face, because consumers will start asking questions and wanting to know the difference between them.

‘The biggest surprise for me in the industry as a whole, not having any particular background in whisky myself, is the yeast side. I’ve always been interested in all different types of alcohol, and knowing how passionately brewers feel about their yeast, I was surprised at how little interest there was from the distilling industry overall – particularly at the bigger distilleries. A lot of them use the same yeast in all of their whiskies, and the same strains as each other.

‘Traditionally distillers have approached experimentation through the cask and maturation side of operations, but now that those have been “done”, people are now looking at the underlying spirit. Yeast is such an important part, I can’t help but think we’ll see more and more creativity in this area.

‘Some people have described Ncn’ean as the most remote distillery in Scotland. Unlike other distilleries that are in more touristy areas, we don’t have as many visitors. The plan was never on having a huge chunk of revenue from tours. We are very small and intimate – we have a maximum of 30 visitors a day, which is tiny when compared to others that receive millions a year.

‘The people that come love it, because they get a very personal experience and they get to meet the whole team – they appreciate the “behind the scenes” view.

‘What we have been trying to develop with our whisky is something that enables the underlying spirit to shine through. We put in so much effort to ensure our new make spirit is as delicious as possible, and then the casks just provide extra flavour and maturation, and bring it all together.

‘I want Scotch whisky to be seen as less snobbish, more democratic. We don’t suggest Ncn’ean whisky to be only drunk neat – personally I love whisky in a Highball, and that is one of the things we will suggest as a serving when it comes out next year. We’ve designed it to be unpeated and fruity. If we can persuade people to drink more creatively then we will feel like we have succeeded.

‘Hearing people’s feedback on our work and their support for what we’re trying to do in the industry, particularly with sustainability and being organic, has been amazing. Having those conversations and comments will stick with me for a very long time.’