As more distilleries choose to share their new make with an intrigued public, Joe Rogers explores whether this rising interest is enough for the spirit to carve out its own niche within Scotland’s distilling scene. 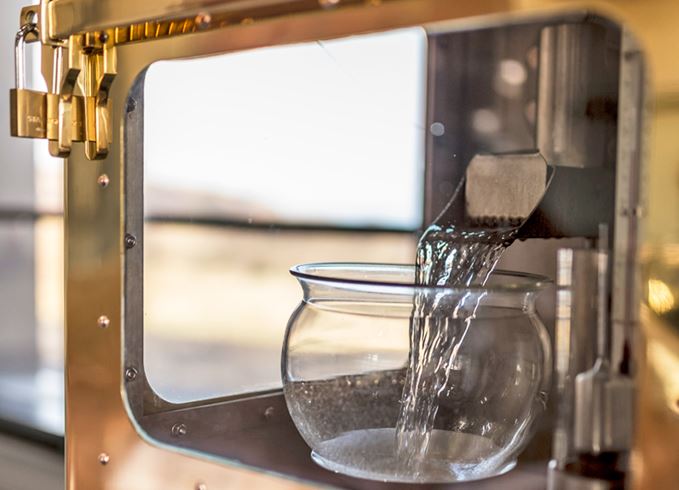 Before there is single malt, there is new make spirit – a clear, aromatic liquid that runs off the still and into the receiver below, at about 68% alcohol by volume (abv). In recent history, few people got to taste Scotch in this immature form, except distillery employees ensuring consistency, or visitors moved by curiosity.

The odd pop bottle of the stuff might be found under the sink in some Scottish households, but just for cleaning the windows, mind. After all, the clearic, as it’s known at home, isn’t really meant for drinking.

It’s made to rest in oak for at least three years before emerging as the finished article, but today an increasing number of distilleries are choosing to share their un-aged malt spirit with the public.

It’s a time of expansion in the Scotch whisky industry, with 10 new distilleries coming online since 2016 and six more due before the year is out. For these fledgling operations, bottling new spirit can be a way to communicate their house style and generate income while their whisky comes of age.

Making the cut: A distillery worker analyses the new make spirit as it runs into the receiver

Kingsbarns near St Andrews, Wolfburn in Caithness and Dornoch in Sutherland all released unaged malt spirit ahead of their inaugural single malts. Visitors to Glasgow’s Clydeside – which opened in 2017 – can purchase 20cl bottles of new make, which commercial director Andrew Morrison says is the most popular item in the distillery shop.

‘We believe our new make helps bring the whisky enthusiast on the maturation journey with us,’ he says. ‘We have had a very positive reaction.

‘Our new make is an excellent representation of the light and fruity Lowland-style single malt we are currently maturing – something which many visitors are surprised they can taste from such a young spirit.’

This surprised reaction is likely due to public perception of new make as harsh or flavourless – a raw material that requires years of ageing to smooth it down and lend it some character. And, while this narrative has long gone unchecked, there are now some in the industry making the case for unaged malt spirits.

Annabel Thomas, founder of modern farm distillery Ncn’ean, has found a creative use for her new make. ‘Historically there has been a perception in the industry that it’s a bit worthless unless you put it in a cask,’ she says.

‘I feel that is a shame, because if you put enough care and effort into it, you can create something really special. We decided to make the botanical spirit because we had so many compliments on our new make.’

Launched in 2018, Ncn’ean botanical spirit is a re-distillation of the distillery’s own pot still spirit with juniper, coriander, grapefruit and locally-sourced herbs. Though it makes a natural pairing with tonic water, this creation is legally distinct from gin because it isn’t based on neutral alcohol.

However, such botanical spirits are not just a novel alternative to gin. Lindores Abbey in Fife also produces a botanical aqua vitae, which it describes as being part of a local distilling tradition that stretches back to the 15th century.

Long before the emergence of what we now call whisky, there was usquebaugh, an early example of Scottish distilling made by flavouring alcohol with herbs and spices. This ancestral spirit was made in pot stills on a small scale, for medicinal and recreational purposes.

Mixing it up: Ncn’ean’s new make is redistilled with fruits and herbs to create a botanical spirit

As time went on and methods grew more sophisticated, the botanicals were dropped and the use of casks for storage and transportation gave rise to the practice of oak ageing. But, if spirits like usquebaugh and its modern counterparts have a precedent in the history of Scottish distilling, and are being enjoyed once again in its present, then what place might they have in its future?

Agave spirits, rums and the world’s various fruit brandies are widely consumed in both aged and unaged forms – the distinction between the two being a matter of style and preference. As new make and other Scotch malt spirits find their way onto the market, an increasing number of bartenders are using their experience with unaged spirits to find a place for them on the back bar.

Conor O’Keeffe of Edinburgh’s Nauticus is preparing to launch a cocktail menu featuring new make, though he admits that using the category-defying product isn’t without its challenges.

‘Most people will gladly drink Tequila, vodka and overproof rum in a cocktail setting, but baulk at the idea of new make,’ he points out. ‘Even at tastings the hosts often don’t recommend drinking it. For me it’s the one glass I’m most keen to try, but maybe that says more about me than anything else.’

Although clearic might take some explaining to customers, O’Keeffe believes it possesses particular qualities not found in aged whisky or other spirits. ‘It has a subtle fruitiness,’ he says, ‘but unlike most other white liquors it’s often blanketed by a punchy malt and alcohol hit.

‘The skill is to bring this forward without beating the drinker with bushels of malted barley. It works wonderfully in a Bloody Mary, our house Bloody Mary at Nauticus in particular [see recipe below].’

At present, new make and other ‘spirit drinks’ like those made at Ncn’ean and Lindores occupy a small niche in the marketplace. But, with proper categorisation and regulation, it’s conceivable that single malt spirit could find its place on the shelf, not as a curiosity or a substitute for Scotch whisky, but as another expression of Scottish distilling.

As the likes of Thomas and O’Keeffe are proving, there is plenty of room for creativity and innovation below the three-year age minimum legally specified for Scotch whisky.

‘I would like to think new make spirit could be used to create a broader range of flavours and products out of Scottish whisky distilleries,’ Thomas explains, ‘but only time will tell if that is realistic. It would need a lot of effort to explain what these products are, how to drink them and so on.’

Scotch may be defined by maturity – but that doesn’t mean that the whisky industry couldn’t benefit from some fresh thinking and a little young spirit.

Method: Combine in a shaker with ice and gently roll to chill without over-diluting, to maintain the texture of the tomato. Strain over ice into a tall glass and garnish with ground pepper, pickles and merguez from East Coast Cured.