Speyside single malt Balvenie has unveiled Chapter Two of its DCS Compendium, a collection of five whiskies with a £20,000 price tag. 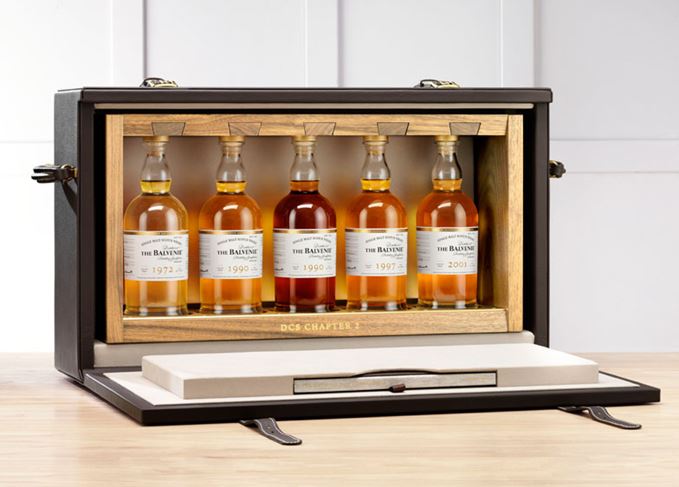 Scotch sequel: Chapter Two of the DCS Compendium is available as a set for £20,000

The collection of five whiskies created by Balvenie malt master David Stewart has been given the title ‘The Influence of Oak’, and aims to chart the diversity in the single malt’s character following maturation in different casks.

Its release follows the launch of Chapter One of the DCS Compendium in October 2015 – five single malts that focused on the theme of ‘Distillery Style’.

Balvenie will eventually release 25 bottlings across five ‘Chapters’ for the DCS Compendium, a series designed to commemorate Stewart’s long career with the distillery and described as Balvenie’s ‘biggest launch to date’.

Stewart, who has worked at Balvenie for 54 years and last year received an MBE, said: ‘This chapter highlights the complexity of flavours each expression takes from wood.

'I love the results from the older oloroso Sherry butt, which has produced a whisky with a fantastic floral and fruity nose, followed by a wonderful honeyed sweetness. The whisky taken from the 2001 Pedro Ximénez Sherry butt is unusual: it shows Balvenie as a near liqueur with toffee sweetness and a touch of spicy ginger.’

Chapter Two is available to buy as a set, complete with display case, for £20,000, or as individual bottles. Fifty sets are available globally.

The five whiskies in Chapter Two are:

Chapter Three, which will be released in 2017, will be themed on ‘Secrets of the Stock Model’, while the final two chapters will be named ‘Expecting the Unexpected’ and ‘Malt Master’s Indulgence’.