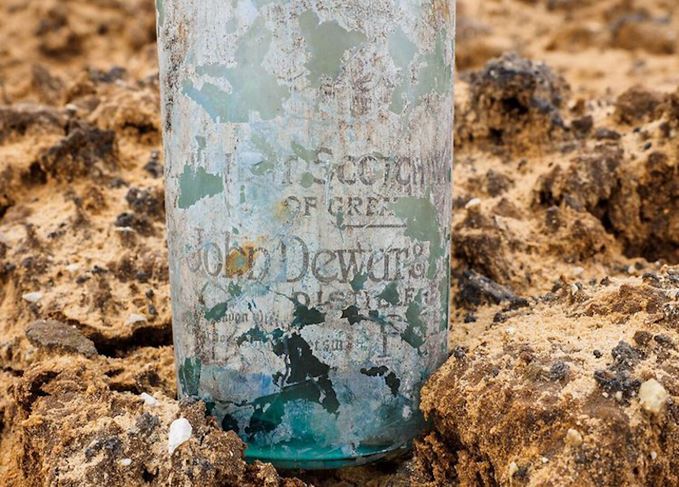 Survivor of conflict: This Dewar’s bottle is one of hundreds found in the dig (photo: Israel Antiquities Authority)

The Israel Antiquities Authority made the finds – the first of their kind in the country – near the city of Ramla, south-east of Tel-Aviv in central Israel, during an excavation undertaken as part of the construction of a new road.

A destroyed building of the Ottoman period would have housed the soldiers of the Egyptian Expeditionary Force under General Edmund Allenby, who were based at Ramla and Sarafand Camps for about nine months from November 1917.

As well as a wealth of military artefacts in the ruins of the main building, archaeologists also discovered a refuse pit nearby, containing ‘an enormous number’ of liquor and soft drink bottles, plus broken crockery and cutlery.

One of the bottles photographed is clearly a Dewar’s blended Scotch bottle, while another has ‘Gordon’s Dry Gin’ embossed on it.

Rare finds: More details of the dig are revealed by the Israel Antiquities Authority

‘The written historical evidence regarding the soldiers’ activities in the British Army in Israel usually consists of “dry” details, such as the number of soldiers, direction of attack, and the results of the battle,’ said Ron Toueg, excavation director.

‘The discovery of this site and the finds in it provide us with an opportunity for a glimpse of the unwritten part of history, and reconstruct for the first time the everyday life and leisure of the soldiers.’

He added: ‘In fact, about 70% of the waste that was discarded in the refuse pit were liquor bottles. It seems that the soldiers took advantage of the respite given them to release the tension by frequently drinking alcohol.’

According to the History of the House of Dewar, written by the company between 1929 and the 1980s, and quoted by the John Dewar & Sons Global Archive:

‘During the war years we supplied large quantities of our whisky for the use of the troops at home and overseas.
‘To the various bodies who were entrusted with the catering for the soldiers, viz:- The Expeditionary Force Canteens, The Navy and Army Canteen Board, and latterly the Navy, Army and Air force Institutes, we supplied no less than a quarter of a million cases in 50 months.’