A British artist has hand-sketched a detailed map of Scotland’s closed, operational and forthcoming whisky distilleries, in a process that took over 120 hours. 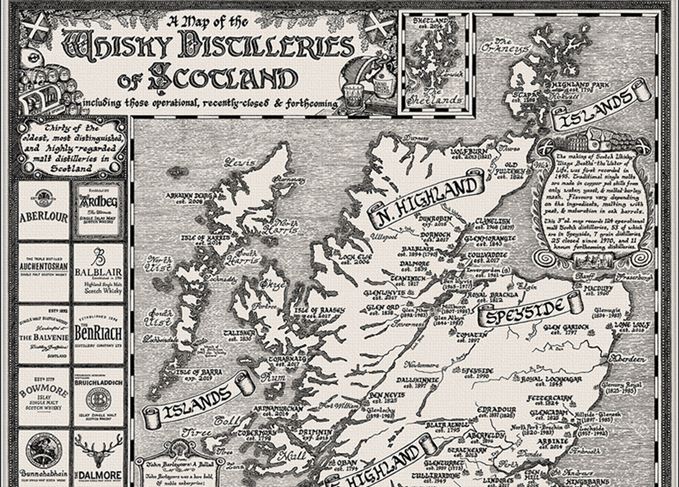 Featuring 168 Scotch whisky distilleries from across the country (as well as one in England – Lakes distillery in Cumbria), long-established sites like Macallan, Talisker, Dalmore and The Glenlivet sit alongside new, upcoming, and recently-closed distilleries.

Calligrapher and whisky fan Kevin Sheehan was inspired by 17th century maps like those of famous British cartographer John Speed.

‘Each print run has sold out, so I’ve made a new edition each year, making minor changes such as adding several new or upcoming distilleries.’

120 hours: The map is first sketched by hand using pencil and then dip pens

Sheehan added: ‘The original was drawn by hand in late 2014 using dip pens and ink with different calligraphic nibs.

‘I begin with a detailed plan, then do most of the drawing in pencil, and then go over in pen.

‘Every line is hand-drawn. Over 4,000 very thin horizontal lines were drawn simply to create the shading of the sea.’

In depth: The map features new and upcoming distilleries that are yet to open

The new 2017 edition shows 157 operational and recently-closed single malt distilleries, including new sites to have opened over the last year, such as Dornoch and Ncn’ean (added to the map as Drimnin, its former working title).

The numbered, signed and dated maps ship internationally from www.manuscriptmaps.com and are priced £48 mounted or £43 unmounted.