Buffalo Trace has unveiled its 2018 Antique Collection of five limited edition Bourbon and rye whiskeys, with one notable change in the annual line-up. 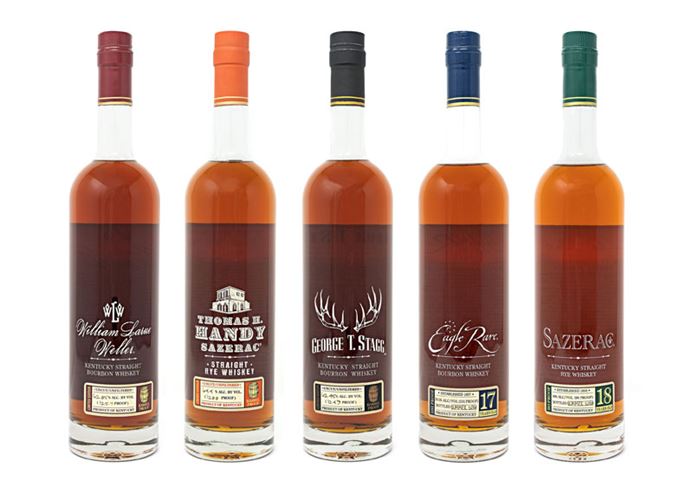 The collection features five whiskeys of various ages, recipes and proofs, all of which have been produced at the Buffalo Trace distillery in Frankfort, Kentucky.

Each year’s collection varies slightly, the most notable change this year being a higher abv for Eagle Rare 17 Year Old.

This year’s George T. Stagg release – the flagship bottling in the range – has been made from Bourbon distilled and laid down to mature in spring 2003.

A vatting of 284 barrels which have been matured in warehouses C, H, I, K, P and Q, the whiskey has been bottled at 124.9 proof (62.5% abv) and is said to have notes of dark chocolate, espresso and tobacco.

The 2018 expression has been made from Bourbon distilled in the winter of 2006 and aged in barrels stored in warehouses C, I, K, L, M and Q.

Bottled at 125.7 proof (62.9% abv), the whiskey is described as having flavours of dried fruit, fig and caramelised vanilla.

This year’s Bourbon was distilled in Spring 2000, and is comprised of whiskey matured in barrels stored on the first, second and fifth floors of warehouse C.

Buffalo Trace describes the edition has having notes of toasted oak, coffee, spearmint and butterscotch.

This year’s Thomas H. Handy Sazerac Rye, an uncut, unfiltered straight rye whiskey, was distilled in the spring of 2012 and matured in warehouses I and L.

Finally, Sazerac Rye 18 Year Old contains whiskey from 24 barrels laid down to mature in Spring 1998, and, bottled at 90 proof (45% abv), is said to have notes of dark chocolate, tobacco and cinnamon.

Buffalo Trace’s 2018 Antique Collection is available in limited quantities globally, for around US$99 per bottle.

Full details of the entire 2018 Antique Collection, including mashbills, barrel size, and warehousing, can be found at buffalotracedistillery.com.