Do a cask’s previous contents matter?

Most of the casks used to mature Scotch whisky had a previous life, filled with Bourbon, Sherry, Port or Madeira; wine of every type, rum, Cognac or even beer. The past of a cask is freely mentioned in press releases and marketing bumf – but does the liquid it used to hold have any impact on the taste of the whisky in your glass? Tom Bruce-Gardyne reports. 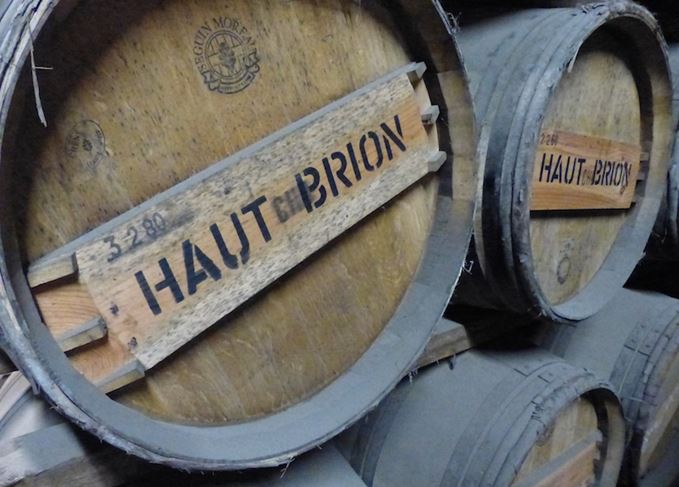 Past history: These casks at Bruichladdich once held one of the world’s most famous wines

Nose that limited edition Sherried single malt carefully. Is that the faint, haunting aroma of PX… or am I getting BS instead? Trying to separate the marketing hype from the truth is no easy task when it comes to the mysteries of oak maturation.

Think of the glorious diversity of casks once used to age Scotch whisky. All those butts, puncheons and pipes that had held Sherry, Port and Madeira for decades before being drained and despatched to some cold, dank warehouse in Scotland.

For those whiskies that were aged for long enough, the impact on flavour would have been huge, you’d imagine, yet funnily enough it was seldom if ever talked about.

A pamphlet published by the Scotch Whisky Association in 1959 posed the question: ‘What gives Scotch whiskies their flavour and bouquet?’ Having completely failed to mention maturation, it concluded: ‘Water is probably the most important single factor in deciding character and flavour.’

Now, of course, we know better. Wood has become an obsession and a cask’s previous contents something of a fetish for many distillers. But, while anyone can slap words like ‘Rum Cask’ or ‘Port Pipe’ on a label, what influence does that rum or Port actually have on the whisky itself?

In other words: Do a cask’s previous contents really make a difference to a single malt?

NO… not really: Stuart MacPherson, Master of Wood, Edrington

‘”No” is probably too strong a word, because what was previously in a cask does have an influence on the whisky. There’s not a lot of information out there, and unfortunately I can’t comment on some of the projects and research work we’ve been working on. Our belief is that it does have an impact on the development of the liquid and the flavour, but it’s not as much as people think.

‘When we talk about quercus alba (American white oak) and the main structural compounds of a tree, it is the hemicellulose and lignins that start to give flavour and character to the maturing spirit.

‘If you take the lignins and apply heat and maturation, you will eventually break down the compounds to create flavours of cinnamon, nutmeg and cloves, and smoky, medicinal aromas. So it’s more about the species of oak, and that’s the difficult part, because I think a lot of it is marketing at the end of the day.

‘With a barrel filled with full-strength Bourbon at 62.5% abv, there are a number of factors. Given the strength of the spirit that spends four to eight years in a small cask in a warm, humid warehouse, it is going to extract more compounds from the wood than a Sherry cask. There’s also the char to remove immature, sulphury notes from the Bourbon to leave those flavours of caramel, coffee and vanilla.

‘By contrast with Sherry at 18% abv, filled into a toasted cask of 500 litres for typically 12 to 18 months in our case, the wine will extract less from the wood. This leaves a larger pool of colour and flavour compounds which we can use in the creation of our whiskies.

‘But I’m not convinced I could pick out fino, oloroso or PX [Pedro Ximénez] in a blind tasting, and there lies the problem. I think people go to tastings and sometimes latch onto what the brand ambassador wants them to hear.

‘I normally tell people that the contribution of the cask is really multi-layered. For me, there are three main drivers, starting with the geographic origin of the oak, down to the terroir it grew in – the soil, hillside and so on.

‘Then there’s the cask construction – its size, shape and the treatment of the wood, all of which can significantly influence the flavour of the whisky.

‘After that there is the previous use of the cask, and therefore how active it is.’

‘When I taste a whisky that has been matured or finished in a cask that held a certain type of liquid, whether wine, fortified wine or spirit, I certainly find a difference.

‘If you take a rum cask whisky, for example, the casks would have probably been ex-Bourbon barrels, so the specific flavour will come from the rum. Try Glenfiddich Rum Cask 21-year-old and you’ll pick up Demerara flavours and a note of exotic spice that you won’t find in an ex-Bourbon cask Glenfiddich.

‘With Sherry, if all that mattered were the type of oak, why would producers specify oloroso, Pedro Ximénez, manzanilla or fino? If you taste Lagavulin Distiller’s Edition finished in a Pedro Ximénez cask, some of those sweet flavours of dried figs and dates are specific to PX, rather than the Spanish oak.

‘Similarly, with a Bunnahabhain finished in a manzanilla cask you’ll find some salty, dried fruit notes that you wouldn’t find in an oloroso cask.

‘I know it’s not the only element, and obviously the type of oak makes a big difference. If you compare a European oak cask with an American one, which both previously contained oloroso, the European cask will be more pungent and you’ll get more spices. With the American you’ll get more creamy vanilla, more crème brûlée.

‘Today, because of the shortage of casks, the big distillers have deals with Spanish cooperages to make casks specifically for them which would be filled with ordinary oloroso for a number of months. By comparison, those old casks that held oloroso for perhaps 30 years would obviously give whisky a much deeper, richer flavour.

‘But, when a distillery like Glenmorangie releases a set of different finishes, they obviously want to show the influence of Sherry on Lasanta or Sauternes on Nectar d’Or. They are very different, and not just because of the different type of wood. And, while it is partly marketing, it's not just marketing.

‘Sometimes the influence can be too strong, and I remember a rum cask where you felt you were drinking rum more than whisky. For me, it’s like make-up on a woman. If done well, it enhances the face, and you don’t notice the make-up immediately.

‘But, if there’s a thick layer of foundation, it looks horrible, because you can’t recognise the person underneath.’

So, although there is some consensus about a cask’s previous contents having an impact on the character of the whisky, the question is to what extent.

With so many variables involved, from the source of the original casks, to the way the wood has been seasoned, to the humidity in the warehouse… it is almost impossible to separate cause and effect.

Beneath this debate you detect that old tension between those who create new expressions of single malts and those who market them.

From the production point of view, maturation is a very multi-layered process, as Stuart MacPherson points out, and that makes the job of marketing and communication all the more difficult. It is much easier to default to the cask’s previous contents, even if the truth is nothing like as simple as that.

Then again, you can’t really expect distillers to restrict their range to American or European oak. That would be very boring in a world of Quinta Ruban, Nectar d’Or and Lasanta, as Glenmorangie calls its core ‘finished’ expressions.

If you have invested in barrels that once held Château d’Yquem or Sassicaia, of course you’d want to tell the world; but whether any consumer can honestly detect those wines in the whisky is another matter altogether.