With her two sisters, Ethel Greig Robertson – better-known as ‘Miss Babs’ – took over the whisky businesses of her father, thwarting overseas takeovers and safeguarding them for the future. In the process, she created Edrington, one of Scotch whisky’s biggest operators and the owner of Macallan, Highland Park and The Famous Grouse. Charles MacLean tells her story. 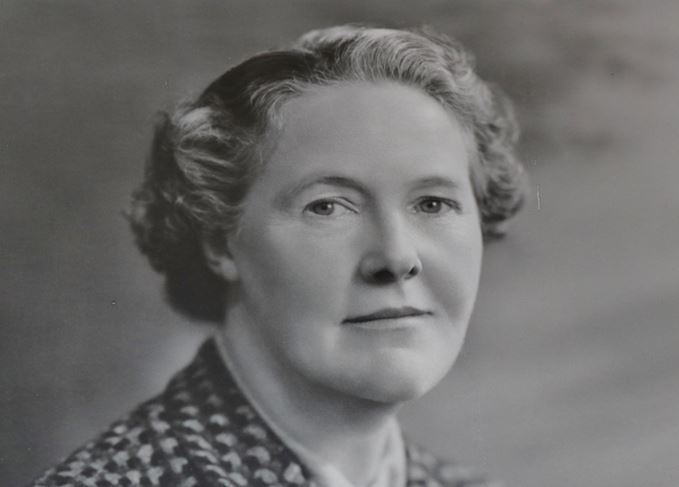 It is a matter of some regret that I never met ‘Miss Babs’ Robertson, but when I was researching the history of the Robertson Trust in 2000 I interviewed many people who knew her well.

She was clearly a remarkable individual. Tall, graceful and gracious, many compared her manner to royalty; stylish and strikingly good-looking, with deep blue eyes; fond of fast cars (she favoured Aston Martins). Intelligent and astute, brimful of common sense, hard-working and determined.

Above all, she had very high personal and business principles, and an unwavering dedication to the people employed by the family companies, whom she regarded as an extension of her own family.

Born in 1903 and christened Ethel Greig Robertson, although always known by her childhood nickname ‘Babs’, she was the youngest of three sisters and one brother. Tragically, her mother died in childbirth.

Their grandfather, William Alexander Robertson, had founded Robertson & Baxter (R&B), the Glasgow firm of brokers and blenders, in 1861; the Clyde Bonding Company in 1879; and Highland Distillers in 1887, but died six years before Babs was born.

Notwithstanding this, it would seem that her character was much influenced by her grandfather – ‘vigorous, hard-working and talented’; noted for his commercial integrity and his ‘generous and unostentatious support of philanthropic works’.

He was highly influential in the whisky trade, and although R&B was a small firm, it was described as ‘the most important business of its kind in the country’.

Several men who would become giants in the industry served their apprenticeships at R&B, including Sir Alexander Walker – whose father was a close friend of Robertson – and John Dewar Jnr.

WA Robertson was succeeded as chairman of R&B and Highland by his oldest son, James (b.1864). Like his father, he rose to eminence in the whisky trade – ‘far-sighted and shrewd, but also considerate and courteous: he habitually took the time to enquire of and show concern for even the most lowly of his employees’.

The characteristics of ‘grace’ and ‘common touch’ which impressed everyone who met his daughters were clearly learned from their father.

In the absence of their mother, the sisters were strictly brought up under the regime of the family’s housekeeper, Miss Shoreditch, who ‘ruled them with great constraint’, according to a school report, but in spite of this the girls led a happy and active social life.

During the 1920s they paid frequent visits to their Uncle Louis in London. Louis Greig, their late mother's brother, was a gifted Glaswegian surgeon and an intimate of Prince Albert (later King George VI), whose life he had saved when he persuaded King George V to consent to him operating on the Prince for a duodenal ulcer.

Greig was made the Prince’s Comptroller and won the Men’s Doubles at Wimbledon with his royal master. He also persuaded Albert not to give up when the latter had been turned down by Elizabeth Bowes-Lyon: had it not been for him, there would have been no Queen Elizabeth, The Queen Mother!

James Robertson was a passionate stalker and fisherman. The girls learned from him how to handle both rod and rifle, and were his companions on many sporting expeditions around Scotland, especially during the annual migrations to Kintail between mid-August and mid-October each year, where the family owned Kintail Lodge (now the Kintail Lodge Hotel) and leased stalking over neighbouring estates.

The life here was not as constrained as in Edinburgh, and Miss Shoreditch could be – and was – given the slip, if there was a ceilidh or other midnight adventure afoot.

Highland home: The Robertsons spent much time at Kintail Lodge, now a hotel

It was here that the sisters’ love of horses and dogs was nurtured; they walked and sailed with the stream of friends who came to stay, and developed a love of stalking in the high hills.

Miss Babs killed her first stag in 1936; at the date when the game book finishes, two months before her death, she had shot 659 stags. At the start of each day it was her custom to fill the stalkers’ flasks with whisky, and the first two stags of the season were always butchered down and distributed to former staff in the district.

James Robertson died in January 1944. Everything he possessed passed to his spinster daughters (their brother William had died during the Great Flu Epidemic in 1919): an estate of nearly £190,000, most of it made up by his shares in the family businesses, R&B and the Clyde Bonding Company. In these companies the sisters now held a controlling interest.

Miss Babs, now 41, was deputed by her sisters to represent them in business matters. Miss Elspeth, who was 48, and Miss Agnes, 47, took care of the family farms in Berwickshire and interested themselves in other matters.

But the sisters were a united force: all decisions, even those relating to business, were taken jointly. They could not be divided and ruled.

Miss Babs had no previous experience of business, but during the years in which she was learning about the trade she had been born into – the duty that had been thrust upon her – she was blessed by having sound guidance from the companies’ directors and the senior partner of their auditors, who lunched with her every day.

Then, in 1947, Miss Babs received a visit from ‘an American gentleman’.

When they were privately installed in the Board Room at 106 West Nile Street, Glasgow, the visitor came directly to the point. ‘Miss Robertson,’ he said. ‘I should like to buy your holding in Robertson & Baxter. In short, I want to buy the company.’

‘The shares and the company are not for sale,’ was the reply.

‘You have not asked me how much I would be prepared to pay,’ came the rejoinder.

‘The shares are not for sale at any price.’

Those who knew Miss Robertson report that when she ended a conversation with such determination, there was nothing more to be said. She and her visitor went out for lunch, and Miss Ethel later reported that he was a charming lunch companion.

The ‘American gentleman’ was Samuel Bronfman, founder and president of Distillers Corporation-Seagram of Canada, a man with a tyrannical reputation and a very quick temper: ‘He was given to horrendous outbursts of rage, was acquisitive on a grand scale, and to get what he wanted could be charming as well as considerate.’

Family business: The Edrington name was taken from one of the Robertsons’ farms

At a board meeting, his nephew once cautioned Uncle Sam to watch his temper or he would get ulcers. Sam grabbed him by the tie and said: ‘Listen. I don't get ulcers. I give them.’

Once set upon a path, Mr Sam was not one to be easily diverted. In 1955 the board of Highland Distillers was approached by Stanley P Morrison, the well-known Glasgow broker (and later owner of Bowmore distillery), with an offer to buy the company ‘from an unnamed American syndicate’, which turned out to be Seagram.

The Highland board replied that ‘they were not contemplating a sale’, and their key customer, the Distillers Company, announced that they would counter the bid.

Although Seagram backed off, both Highland and R&B were thoroughly shaken, and formed a supply/purchase agreement to make it more difficult for a hostile bidder to take them over.

The Robertson sisters were especially concerned about the effect a takeover would have on the staff of R&B, and also about the impact of inheritance tax in the event of their deaths. Death duties were charged at 80% of the estate, and the sisters were 64, 63 and 57 in 1960…

They sought the advice of the leading tax barrister of the day, who proposed the creation of a holding company and a charitable trust. The sisters’ capital in the family businesses would be transferred to the former, which was named Edrington after one of their farms in Berwickshire, and the shares received in return, including all shares with voting powers, were gifted to the latter, named The Robertson Trust.

The Trust Deed was signed on 1 May 1961. Its two stated purposes were: first, to ensure that the family concerns should ‘continue as active businesses in the control of British subjects’ and, second, that ‘the support we have given to a large number of charities should be continued and extended’.

Today, the Robertson Trust is the largest independent charitable trust in Scotland, distributing around £20m to over 500 worthy causes a year.

I have mentioned that Miss Babs drove a series of Aston Martins. To many, these elegant motors epitomised her character – stylish, dashing, very British.

She was a fast and capable driver – as soon as it was invented, she installed a device for identifying speed traps – but it was two days after an accident on a wintery road in 1985 that she died ‘from chest injuries following a road traffic accident’, according to her death certificate. She was 82.