The Whisky Barons: who were they?

To simply sum-up the Whisky Barons as ‘entrepreneurs’ would be doing them a disservice. For these were the men who laid down the cornerstone of the Scotch whisky world as we know it today. Dave Broom investigates. 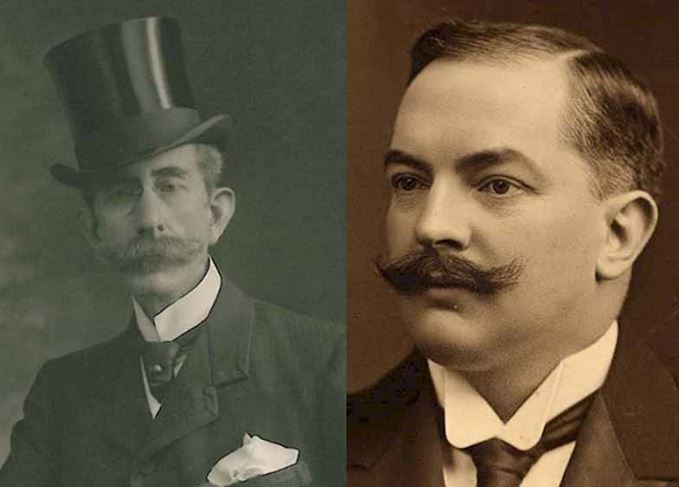 Scotch whisky was built thanks to the work and efforts of a group of remarkable men. They are often called ‘entrepreneurs’, but they were considerably more than that – they were visionaries, creative, financially astute, open to possibilities, risk takers, men of action. By the 1920s, many of them had been ennobled. Collectively, they became known as the ‘Whisky Barons’.

The Barons’ ascent from obscurity to the upper reaches of society was extraordinarily rapid, but it mirrors that of Scotch.

John Alexander Dewar was only 24 when, in 1880, he took over the firm his father had founded. He was joined by his younger brother Thomas (aka Tommy) who was 21 at the time. While John Alexander stayed in Scotland, Tommy was sent to London to try and establish the firm’s whiskies in what was still a very new and untested market.

By 1899, Dewar’s was selling more than one million gallons a year. Three years later, Tommy (along with his friend and fellow confirmed bachelor, Tommy Lipton of tea fame) was knighted in the accession honours of King George V. In 1907, John Alexander was made a baronet and in 1917 was ennobled as Baron Forteviot of Dupplin, Perth. Tommy had to wait for two years to become Baron Dewar of Homestall, Sussex.

James Buchanan’s story runs parallel to Tommy’s. The Canadian-born Scot started his whisky life as London agent for Mackinlay’s in 1879. In 1884, he had started his own firm and within a decade, the ‘Buchanan Blend’ was a national success and eyeing up global expansion. He was made a baronet in 1920 and became Baron Woolavington in 1922.

The last of the barons is strangely, and sadly, forgotten. His name was James Stevenson, who joined John Walker & Sons at age 15 in 1888. Sent to London in 1908 to run its business there, he became joint managing director in 1912. He was made a baronet in 1917 and became Baron Stevenson of Holmbury in 1924.

It all seems relatively straightforward. Success of brands rewarded with honours. The story behind the titles is, however, more complex. Not all of the Barons got their titles for services to whisky. John Alexander’s came for services to politics. He had served as Lord Provost of Perth and was the Liberal MP for Inverness between 1900 and 1916 (Tommy too was a politician, but only served as Conservative MP for St Georges in the East for one term).

Celebrity style: James Buchanan was a well-dressed, ‘A-list’ celeb in his day, as this sketch from Vanity Fair shows

Buchanan, while not a politician, was a noted patriot and received his baronetcy for services to the war effort. The same applied to Stevenson, who after the outbreak of war in 1914 volunteered his services to the Government, for no remuneration. He served under Lloyd George, the Minister of Munitions. Post-war, he became commercial advisor to Winston Churchill, Secretary of State for the Colonies and chaired the committee which organised the British Empire Exhibition in 1924.

The honours show quite how far Scotch had moved, from the rough, rude, drink of North Britain to an acceptable middle class tipple in polite London society.

It is hard to imagine quite what it would have been like; the arrival of this new drink, sold by remarkable salesmen who were assiduous in ensuring that the glasses ended up in the right hands.

They didn’t just sell whisky, they sold an idea, and in doing so created this new concept called ‘branding’. By being seen in the right theatres, race meetings, sporting events, hotels, clubs and restaurants, they built whisky’s credibility as an acceptable drink for gentlemen, because they were seen as gentlemen themselves.

The dapper and elegant Buchanan didn’t just have the contract to supply music halls. In 1898, he had acquired a Royal Warrant from Queen Victoria. The year before, he had been given the exclusivity to supply the House of Commons. To quote Figaro magazine of that year:

‘All orators and all persons who require to make use of their voice have adopted in this country, this drink [whisky and water].’

Tommy Dewar was equally well connected. Like Buchanan, he was an incredible salesman who saw the importance of advertising, but he also realised the benefit of making himself a celebrity and cultivating links with the right people.

King Edward VII gave him a knighthood, not for whisky or politics, but because he was a personal friend. The King had the first car in Britain, Tommy Lipton the second, and Tommy Dewar the third. Whisky men had the ears and lips of princes, and in class-obsessed Britain of the time that was a seal of approval.

‘Don’t forget,’ said Diageo’s Nick Morgan when we were discussing the Barons, ‘they were celebrities. Buchanan and Dewar were “A-list” of their time. Buchanan was the third-richest man in the country at the time.’

Friends in high places: Tommy Dewar was the third person to own a car in Britain (photo: Dewar's Archive)

It could also explain some of the apparent anomalies in the distribution of honours. James Stevenson’s was entirely for his political work. Alexander Walker, too, was knighted for his efforts during the conflict, but was never made a peer. The Walkers were quieter men, their manner of doing business less publicity-oriented than their rivals: ‘Less promiscuous with their wealth,’ as Morgan phrases it.

The same could well apply to Peter Mackie, of White Horse, another of the whisky knights of 1920. ‘If the honour was conferred on him for his success in the whisky trade,’ wrote Robert Bruce Lockhart in Scotch, ‘he must have been gratified, for of all the whisky magnates he was the most ruthless in his rugged individualism and the proudest of his own achievement.’ For all of the technical advances he brought to whisky, ‘Restless Peter’ never quite fitted in.

All of this also brings into perspective how significant the Great Merger of 1925 was, when Buchanan-Dewar (which had merged in 1915) and Walker joined forces with Distillers Company Limited (DCL). ‘The largest piece of capital formation that had ever taken place in the UK,’ in Morgan’s words. ‘The importance of these people to the economy is hard to exaggerate.’

The abiding mystery is why William Ross, the man who masterminded the Great Merger, was never honoured. Maybe he was too trade. Perhaps the heady days of whisky as the drink of celebrities had passed.

In one generation, the knights and Barons had transformed Scotch into a global spirit. We owe them a huge debt.