In 1959, an unusual security detail was enlisted to guard the stocks of Ballantine’s whisky maturing at Dumbuck: six white geese. Over the following decades, the ‘Scotch Watch’ expanded to more than 100 birds and rose to global fame, starring in TV documentaries, magazine articles – and their own advertising campaign. Richard Woodard reports. 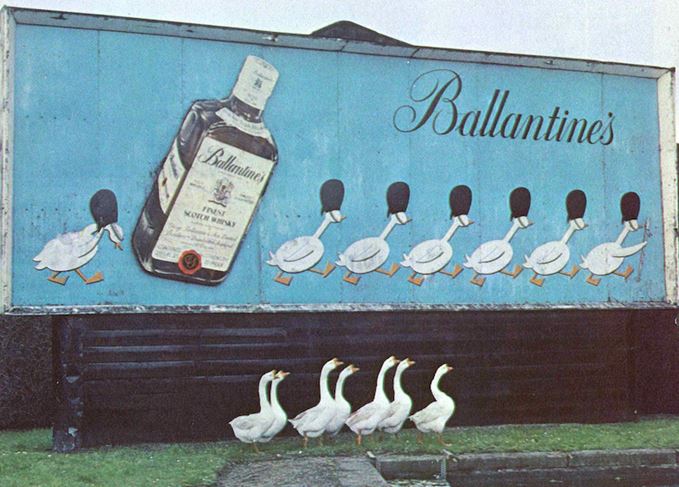 Maturing whisky is a valuable commodity that can prove all too attractive to thieves, leaving distillers with little alternative but to put in place a range of protective measures: security guards, fencing, hi-tech alarm systems, CCTV cameras… and geese.

When, in the late 1950s, the then owner of Ballantine’s blended Scotch, Hiram Walker, built a new complex of maturation warehouses at Dumbuck, just east of Dumbarton, security arrangements were a vital part of the plans.

The sprawling 14-acre site featured a number of warehouses, all gradually filled with maturing Ballantine’s whisky, and difficult to guard effectively. A combination of human security guards and Alsatian dogs was the most obvious method, but hugely expensive.

The civil engineer in charge of the site, Brigadier Ronald Cowan, also happened to be a keen birdwatcher. Geese, he told Ballantine’s managing director Tom Scott, had excellent hearing and eyesight (unlike humans, they can see ultra-violet light), are light sleepers and are noisily territorial, particularly when they have eggs or young to protect.

What’s more, they would happily live on a diet of the grass surrounding the warehouses, supplemented by grain from the nearby Dumbarton distillery.

It might have seemed an unlikely protective strategy, but for long historical precedent. Back in 390BC, as the Gauls prepared to attack Rome, the city’s exhausted soldiers were asleep in the Capitol, their hilltop fortress.

Luckily, a flock of geese – kept near the temple of Juno as they were sacred to the goddess – raised the alarm. The Gauls were routed, Rome survived – and history took a very different turn.

Back in Dumbuck, the Scotch Watch, as it became known – or The Scotch Guards, to give the birds their alternative title – began with a six-strong squad: one gander and five female geese.

At their peak, and aided by a breeding programme from the West of Scotland Agricultural College, their numbers swelled to well over 100, mostly large Chinese White Geese, plus a few Roman Geese, all led by the dominant gander known as Mr Ballantine.

But this explosion in the avian population was hard-won, as Arthur Carroll, who took over as goosekeeper (a full-time job, incidentally) from 30-year veteran Alex Malcolm, recalled, speaking in 1996: ‘The females turned out to be excellent sentries, but were not as attentive to their nesting duties as they might have been.

‘For a time, we had to recruit some ordinary chicken hens as egg-sitters and they seemed to take to their role as surrogate mothers very well.’

The early 1990s brought another threat to the Scotch Watch, in the shape of a marauding fox. While Dumbuck’s warehouse complex remained unbreached by human thieves, this four-legged intruder evaded every attempt at capture, reducing the goose population from more than 100 to about 70 by 1996.

‘I have laid traps, stayed up all night and he still manages to get in,’ Carroll said. ‘It’s remarkable because this must be the most secure place in Britain, yet he always slips through the smallest gap. I have actually seen him in daylight, running across the fields.’

The local authority put down humane cage traps in an effort to catch the goose serial killer, but to no avail. ‘So far, the biggest thing they have captured has been a hedgehog,’ said Carroll.

For the rest of the flock’s 50-plus-year tenure at Dumbuck, they more than paid their way, keeping the lawns impeccably trimmed and the staff well-supplied with eggs (the proceeds from which were donated to a local hospital for ex-servicemen).

Given the ready supply of food and the need to protect nests and young, there was never any urge from the geese to fly away – or almost never. In 1962, one stir-crazy bird caught a glimpse of the flowing waters of the River Clyde – and plotted her route to freedom.

Collective strength: At one point, the Scotch Watch numbered over 100 (Chivas Brothers Archive)

Her name was Clementine, and so keenly felt was her loss that Ballantine’s took out a newspaper advertisement in an effort to get her back:

LOST from Ballantine’s Whisky Maturing Warehouses at Dumbuck on 17th November, 1962, one Mature Chinese white Goose, with slight droop to left wing, believed to be without leg ring. This goose has been trained as a guard. Last seen swimming on the River Clyde between Bowling and Dumbuck. The goose has secret identification mark and any others will be unacceptable.

Luckily, Clementine wasn’t ‘lost and gone forever’, and her spree ended soon enough. She was found by a doctor ‘wandering forlornly’ along the shores of Loch Lomond before being returned to her duties. The doctor kindly donated his £50 reward to the RSPCA.

Two other members of the Scotch Watch enjoyed a more legitimate dose of freedom in 1963, when they were flown (in an aeroplane) to Los Angeles, where they were feted as guests of honour at the Park Turf Club’s annual ceremony convened to choose the ‘Miss Goose’ beauty queen.

As time passed, the fame of the birds spread, and they were sought after by tourists, as well as being in demand for newspaper and magazine articles, and television programmes – they were featured by the BBC and British Movietone News.

There were commercial spin-offs as well. The geese were used on several occasions by Ballantine’s for adverts, and featured on a rock band’s album cover. There was even a merchandise line of ties, scarves and lapel badges.

In demand: As well as ads, the geese judged a beauty contest (Chivas Brothers Archive)

All good things must come to an end. The last of the goosemen left at the end of the 1990s, to be replaced by a rather soulless automatic feeder, and the advent of CCTV cameras was a precursor to the demise of the Scotch Watch.

By the end of 2011, their numbers depleted to seven – only one more than the original guard enlisted in 1959 – it was the last post for the Scotch Guard. Happily, however, they did not end their days as anybody’s Christmas dinner.

Instead, the remainder of the flock was ‘retired’ to Glasgow Green and the care of Glasgow Humane Society. There they were able to swim in the Clyde and take in the views of Strathclyde grain distillery as a reminder of their past life, joining the descendants of other whisky warehouse geese.

Meanwhile, Ballantine’s whisky slumbers on in the Dumbuck warehouses, protected now by the wonders of 21st-century technology. Just as safely guarded as ever it was, but an altogether quieter and duller place for the departure of the fondly remembered Scotch Watch.

So, if you’re ever passing Glasgow Green and see some large white geese there, spare them a thought, a kind word and a bite to eat for their many years of loyal service.

Special thanks to Chris Brousseau and the Chivas Brothers Archive

Making headlines: This clip from British Movietone News (no sound) features the birds: