The lost practice of dramming

The practice of ‘dramming’ – free nips granted to distillery workers during their shift – was originally introduced as far back as the 18th century to deter staff from pilfering spirit for themselves. However, as Gavin D Smith finds, it led to some workers consuming as much as a full bottle of whisky each day. 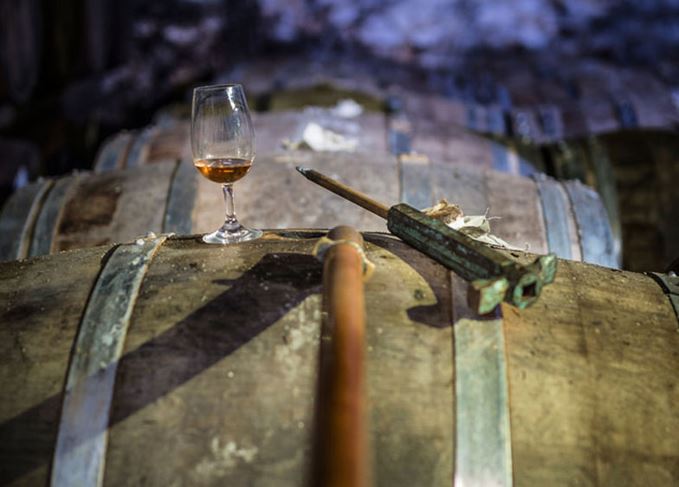 Ask anyone who was working in Scotch whisky distilleries before the mid-to-late 1970s what the biggest changes were during their careers and they are almost certain to give two answers. One is likely to be increased automation of processes, and the second will almost certainly be the demise of the traditional practice of ‘dramming’.

The term ‘dramming’ first appears in 1771, and in a Scotch whisky context, came to apply to the semi-legal practice of doling out drams of whisky to distillery workers during their shifts. The theory was that this was likely to deter staff from pilfering whisky for their own use – a theory that tends to draw quizzical smiles from said workers.

Sir Robert Bruce Lockhart (Scotch, 1951) described the practice of dramming in some detail when reminiscing about his childhood on Speyside, where his family owned Balmenach distillery. ‘When I was a boy, the distillerymen at Balmenach were “drammed” three times a day. In my innocence I assumed that this gift of free whisky came from my uncle’s generous heart... I was of course mistaken. The free “dramming” was instituted for one purpose only; to counteract a temptation which existed then, exists to-day, and is apparently irresistible.’

He adds that ‘…nowadays even “dramming” has to be watched with vigilance. I know of one distillery where the men, on receiving their dram, used to retire to another room on the pretence of wanting to add a little water. Instead, they put the whisky in a small phial, took it home, and, waiting until they had a full bottle, sold it at a fancy price. The manager defeated this little scheme. When the men now come for their dram, he pours the water in first.’

Resisting temptation: The ability to siphon off spirit was an ever-present problem in distilleries

The temptation to pilfer whisky by various means, including ‘saving’ drams, as described by Lockhart, was highly attractive at the time. Scotch was written just a few years after the end of the Second World War, when most Scotch whisky was destined for export markets, and, as Lockhart puts it, ‘…malt whisky is so scarce and so prized’.

The person responsible for dishing out drams was the ‘brewer,’ the second-in-command to the manager, and the number of drams issued, their size, and style varied from distillery to distillery.

Interviewed for The Whisky Men (2005), Bowmore distiller Ed McAffer explained: ‘They’d have a dram at six o’clock in the morning, another one at midday, and one at six o’clock at night when they finished, if they worked a 12-hour day.’ In other distilleries, up to five drams per day might be dispensed.

Many brewers drammed the men – often from a large horn – with ‘clearic,’ or new-make spirit, sometimes known as ‘fresh,’ but more benevolent excise officers would allow them to use older, maturing whisky. Perhaps surprisingly, many of the men preferred clearic to mature spirit, and Jim McEwan recalls when working at Bowmore distillery as a young man ‘the shift men loved the white stuff, and come the slack season, when we went out to cut the peats or clean the lade, whitewashing the buildings, whichever one of these jobs you got and there was no white stuff, the boys hated it. They hated drinking the warehouse stuff.’

In addition to regular drams, others were provided as an incentive to undertake undesirable and dirty jobs beyond the usual tasks expected of employees. These tasks could vary from helping unload a lorry to climbing inside boilers and chipping off the burnt-on oil.

Orderly queue: Distillery workers would usually receive a dram of whisky at the start and end of their shift

These were known as ‘dirty drams’ or ‘stourie drams,’ and Norquoy recalls: ‘Sometimes you would get dirt from one of the contractors doing something at the distillery and rub it on your face, and you’d go to the brewer and get a dirty dram by saying it was very hard work – even though you hadn’t been doing it!’

It has been calculated that given the strength of some drams dispensed and the chance to obtain ‘regular’ and ‘dirty drams,’ some distillery workers were often consuming in excess of the equivalent of a bottle of whisky per day.

Modern distillery working regimes could not accommodate such excessive consumption, even without the presence of health and safety legislation, as little of the hard, physical work of previous times remains. Turning ‘the piece’ on a malting floor or shovelling coal for several hours to fire a still tended to see the alcohol sweated away.

Interviewed for The Whisky Men, retired Lagavulin stillman ‘Big Angus’ McAffer explained: ‘You watched yourself, you weren’t drunk. You knew the limit generally, but maybe sometimes one of you would have a wee bit too much, but you helped him, you did his work as well as your own, and that covered him before the next shift came in, and nobody knew anything. His work was done. When the next man came in, there was plenty of coal, the boiler was clean, the boiler was going, we were helping one another. He’d do the same for me, that’s the way you were working. You watched your jobs and there were never any accidents due to it.’

Nonetheless, there were undoubtedly a significant number of cases of alcohol dependency among distillery workers, with some even unwilling to take their annual holidays as it would mean missing their numerous daily drams.

The introduction in October 1967 of the breathalyser test and drink-driving legislation probably saw the writing on the wall for dramming, along with an increasing awareness of the dangers of excessive drinking, and particularly excessive drinking in a place filled with machinery and flammable spirit. New workplace safety laws were introduced, and gradually the practice of dramming was replaced throughout the industry by the allocation of a free bottle or two of whisky per month. A nice perk, but hardly the equivalent of several cask strength drams a day, and maybe one or two more if you could find a way of dirtying your face.