Angela D’Orazio is master blender and ‘chief nose officer’ of Mackmyra, the experimental whisky distillery based in Sweden. Here she tells Kirsten Amor about innovations with Microsoft, and how world whiskies are challenging Scotland’s status quo in the industry. 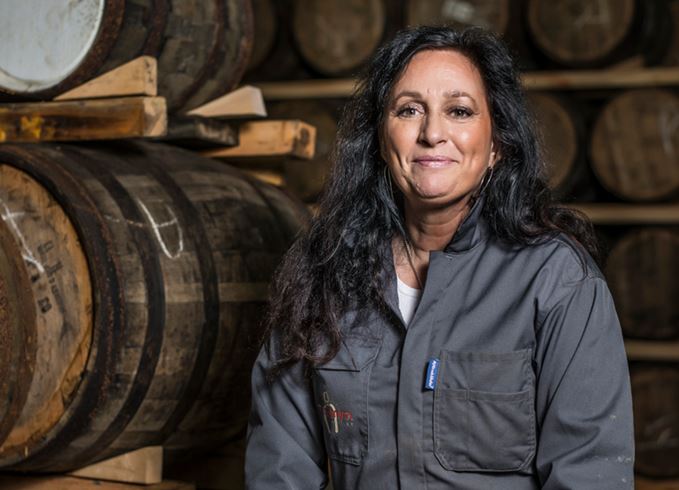 Grape and grain: D’Orazio initially trained as a sommelier before discovering her passion for whisky (Photo: Christian Hagward)

‘Whisky is an industry that has survived due to tradition. Traditions are wonderful when they are giving us beautiful things from the past, but times are changing. New laws are coming in, and whisky industries from different parts of the world are emerging. The guys from Scotland have the biggest historical knowledge of whisky of course, they have much more than what we have, but on the other hand we’re threatening the status quo because we’re creating innovations that they’re not allowed to do. They have their hands tied behind their backs sometimes.

‘I think some Scotch distillers would certainly like to progress more, but they’re not always allowed. Then there’s the “traditionalists”, who are generally older men, and you have them making whisky with other traditionalists. In general, I do like the traditionalists, I just don’t think you should give them all the power. Hire some nosing women who will give you a new perspective, and see the big picture. I do think it’s best when the two work together.

‘The development of our artificial intelligence (AI) whisky was about having the right people at the right place. We met with Microsoft, and we discussed whether it would even be possible to create an AI whisky with them, and they mentioned they had Fourkind, a Finnish tech company who worked with the AI software, and they connected us with them.

‘For me, it was real fun to be a part of this project. The AI software is nothing but a tool for a master blender to put together recipes. You cannot say, “This is AI Tom, he’ll create your next whisky,” because AI Tom doesn’t have a mouth or nose, the knowledge about how the casks are developing, or the information you have about the warehouse. The AI software can process a lot of information and generate plenty of ideas, but without the expertise the master blender has of different whisky flavours and aromatics, it cannot create the big picture.

‘After making the announcement about the AI whisky, I read the comments on our webpage. The majority of comments and feedback were positive and curious, but there were also some whisky nerds who wrote things like: “Whisky is about craftsmanship, AI has nothing to do with whisky”, or “This is a sad day we have come to, that we now have AI whisky. We liked Mackmyra before, but not anymore”.

‘To me, those people haven’t read how this project originated, how we developed it, or our perspective on it. If they had, they would know the first thing we said was, “The whisky world can relax.” It’s not like we’re going to give up the work of the master blenders and everything will be produced by computers from now on. I have mentored this project, and while it was so much fun to do it, the AI is but a tool – it’s not going to create “world domination” in whisky.

‘If I said I hadn’t thought about creating a low-abv drink, I would be saying a lie. This is a topic everybody is looking into now. Someone once said to me, “If you could make an alcohol-free whisky, you would become rich.” But you are taking away the alcohol, which bears all the aromas. So then you worry and question what kind of “oak water” will you get at the end of the process? Yet there’s so many people who can’t drink strong liquor, or don’t drink strong alcohol for religious, age or health reasons. So if you can manage to keep the taste, and continue to follow the whisky-making process and keep it somewhat similar to whisky, then why not?

‘You’re not supposed to talk about this in the whisky business, but there are a lot of people who have an unhealthy dependency on alcohol, and some are also working in the industry. This is something we have to be aware of, as we need to care for people’s health. Some people are prone to drinking too much and they stay in the business, and eventually they lose their job, their house, etc, and this has happened many times. Sometimes it doesn’t go that far and people just drink too much, but it should be discussed more.

‘When experimenting with new flavours in whisky, the results are not completely unexpected, but sometimes you have side effects which turn out interesting. For instance, when you use Scandinavian wines, like cloudberry for example, you will have some side effects. You look at the wine, and you start to see things you should have checked at the beginning, like how the wine is very tannic. You don’t think about all the qualities and use the old wine casks, and the whisky is great, but after some time the whisky becomes tannic, more so than usual. You have to be careful, and accept that you will learn lessons along the way.

Modern roots: Mackmyra distillery opened its doors in Sweden in 1999

‘When I started working with Mackmyra I was their link to all the whisky drinkers, connoisseurs and whisky clubs in Sweden [D’Orazio previously worked as brand ambassador for Glenmorangie in Scandinavia, and established the Swedish branch of the Scotch Malt Whisky Society]. I was in charge of a whisky bar and its tastings, and hosting the masterclasses with the producers that visited.

‘It was actually a friend who saw Mackmyra’s job ad in the paper; they were looking for a whisky consultant, as they called it. I contacted them and said, “I would love that job.” A few years later, after the whisky was maturing, they needed someone to blend it who had an understanding of whisky flavour profiles, and I was the only person within the company that had this knowledge. So I began to create the blends, and test whiskies out.

‘When things are fun and easy for you, you know you’re in the right place. I was promoted to head of development, and stayed in that position for several years. At a certain point, people started calling me master blender. So my boss said, “Angela, we need to upgrade your title,” and I became Mackmyra’s master blender. We have a lot of fun people at Mackmyra, and one of the guys on the board said: “There’s a CEO, CFO or CNO at every company, so why don’t we create a CNO – a chief nose officer – here?” So they dubbed me the CNO, and it was initially a fun joke. But then journalists started writing it in their articles, so it became my second title!’