A whisky odyssey to Orkney

There’s a theatre that comes with opening old and rare whisky bottles, an event made all the more special with the right location and company. Angus MacRaild gathered a group of collectors and devoted whisky drinkers for an old and rare whisky tasting tour from Edinburgh to Orkney. 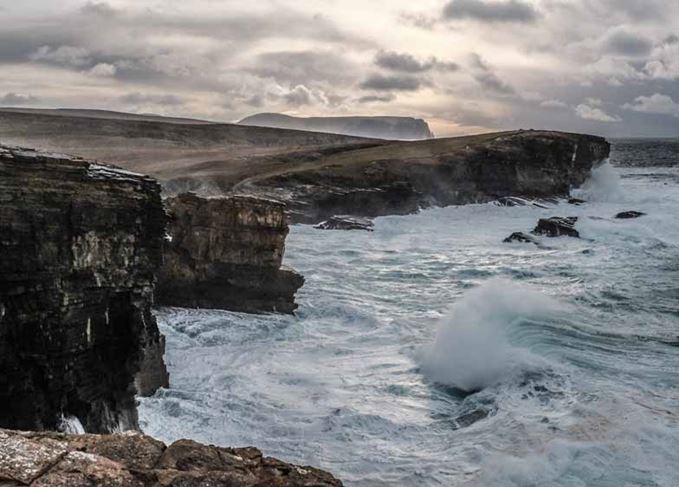 Setting the scene: The Yesnaby cliffs provided part of the backdrop to the ‘Dramspotting’ tour (Photo: Marcel Van Gils)

We are arguing about corks. Or, more specifically, who is going to remove which cork from which bottle. That’s what happens when a gaggle of whisky lovers is set loose on ancient, long-coveted bottles. Time-corroded lead foil capsules are negotiated with fine blades, and arid driven corks, long-glued into bottle necks, are excavated piece by piece; small rituals to be squabbled over buoyantly.

‘Once in a lifetime’ is one of the most over-used pieces of whisky hyperbole. I’ve been fortunate enough to participate in a number of whisky events that might justifiably be termed ‘once in a lifetime’ – enough to have reached some modest conclusions. Firstly, the chances of such whiskies aligning together in the company of the same people again should be suitably infinitesimal.

And, more importantly, the pleasure of their consumption should at least match – preferably exceed – the lofty anticipation of their opening. As we watched horizontal hail while the heathery peat of 1930s Highland Park throbbed, bass-like in our heads, I think we all felt our anticipations exceeded.

The seeds of this event lay in the coming together of four disparate Scotsmen. Phil Thompson and his brother Simon from Dornoch Castle Hotel, Jon Beach of Fiddler’s Inn and myself, Angus MacRaild. A scruffy cabal of drinkers that might just pass as a ‘whisky club’ to the untrained onlooker.

We colluded in the beginning to share the cost of buying and opening the kinds of old-style whiskies we wanted to drink. This quickly evolved into the organisation of events – or ‘tours’. We wanted to bring together our friends, people we knew who shared the same philosophies and passions for whisky that we did, and give them a reason to open bottles they had long pondered what to do with.

During three previous annual excursions around Scotland, armed with ancient bottles, we had long spoken about Orkney. This elemental and far-flung scree of islands holds an unyielding grip on the minds of whisky lovers. Were there to be an absence of distilleries on the archipelago, it would only seem proper to endeavour to found one. It is a land which demands distilling.

We caved, made plans and eventually the ‘Dramspotting’ tour was born. Our trip would begin in Edinburgh with a visit to the Scotch Malt Whisky Society (SMWS) at the Vaults. Then north to Dornoch for a pit-stop and inspection of the fledgling Dornoch distillery, before finally to Orkney for three nights.

After three years of these trips there is a rapport among the attendees. What was once uncertainty and a kind of edgy excitement has given way to an easy confidence in each other’s company and that wonderful sensation – the knowledge that great memories are certain.

Looking back, it felt like longer than a week… so many whiskies, conversations and moments were crammed into those seven days. As such it is easy to overlook the first night in the Vaults, a building that stretches back into the antiquity of Edinburgh. The ancient capital of whisky in Leith, for centuries a port associated with trade in wine and spirits, it now stands alone against the encroachment of gentrification. Amid the new multitude of bars and restaurants which adorn Leith, it remains a deeper, more cerebral whisky place. We dine and open bottles from the early days of the SMWS deep into the night.

Dornoch brings late-arriving members of our party and two nights of merriment. Bottles of old vatted malts from the 1920s and late 19th century are opened. They are heavy drams, weighted with thuggish peatiness and the echoes of a whisky character long since departed.

The Orkney ferry emerges into space open enough to reveal the transient pockets of weather that arc disparately across Scotland’s sparse northern coasts. The flame of an oil refinery in the distance appears almost dystopian beneath a greying curtain of rain. We crack a Scapa and a Highland Park, both eight years old, labelled as 100 proof (57.1% abv) and bottled circa 1978 by Gordon & MacPhail. The Scapa is industrial, the Highland Park rustic with an enthusiastically youthful blade of peat.

The loudest proponent of this trip was Olivier Humbrecht, the Alsatian Master of Wine and avid Highland Park collector. Unlike many collectors, Humbrecht is immune to the pain that can accompany opening rare bottles. For this trip he pillages his own collection, stripping it of irreplaceable bottles. From the outset he exudes an unspoken sense that ‘this is the time’.

We are greeted at Highland Park by brand ambassador Martin Markvardsen and senior staff. The weather is vicious: hail and sleet scour the distillery with the kind of aggression only island geography allows – unencumbered by mountain, city or forest. We take a leisurely tour with distillery manager Marie Stanton, spending a disproportionate amount of time discussing malting and peat.

If there is one thing I will take away from my few days on Orkney, it is a sense of the locality and importance of peat and the deeply complex way it can influence flavour in whisky. Stanton tells us about the compositional variation between Orkney, Tomintoul and Islay peat, and how this can give different phenolic signatures to the resultant whisky.

Come the afternoon, it’s time to open our bottles. They are too numerous and borderline gratuitous to list here, but the undoubted highlights were the 12- and 10-year-old distillery bottlings from the 1940s and 1950s. The peat character is dense, dry, turfy and muscular. They are like coal hearths, earthen and rich; they stick in the mouth and linger between the teeth.

It’s a flavour that remains in mouth and mind the following day as we set out to see more of the island. We stop at the cliffs of Yesnaby, an edge-of-the-world place where the waves churn themselves against the rock in hypnotic and terrifying whorls. It is in direct contrast to the Ring of Brodgar, a place of comparative and eerie stillness; ancient rocks hewn down to new shapes by lichen and centuries of exposure; beneath our feet, the same heather composite peat. Both are places that compel you towards whisky, almost more than any other island – it is Orkney where whisky feels beyond essential.

Our final night is given over to Laphroaig. We open a no-age-statement (NAS) expression from the late 1940s and a 14-year-old bottled in 1953 for the US. Like the Highland Parks of the previous day, these are whiskies whose architecture is underpinned comprehensively by peat. The character is different to the Highland Parks, but there remains a sibling resemblance through their methodology of production.

It is a fitting end to three days where exposure to the weather, to the landscape and to the importance of peat have highlighted how terroir can exist in whisky, and that it once did in a more palpable abundance than today. The voices of the heather-rich peat of Orkney and the sphagnum moss and seaweed-infused peat of Islay remain undimmed, even after decades in bottle.

But, above all else, it has been a trip about friendship. That’s my final rule: if you really are going to have a once-in-a-lifetime experience, it must be shared with people that matter; the whisky is just the ink between the lines.