Neither two world wars, economic decline nor the region’s remote location could stop the Orcadians from building Orkney into a destination renowned for its Scotch and peat. Although just two distilleries remain, Gavin D. Smith finds an archipelago rich in whisky history, and tenacity. 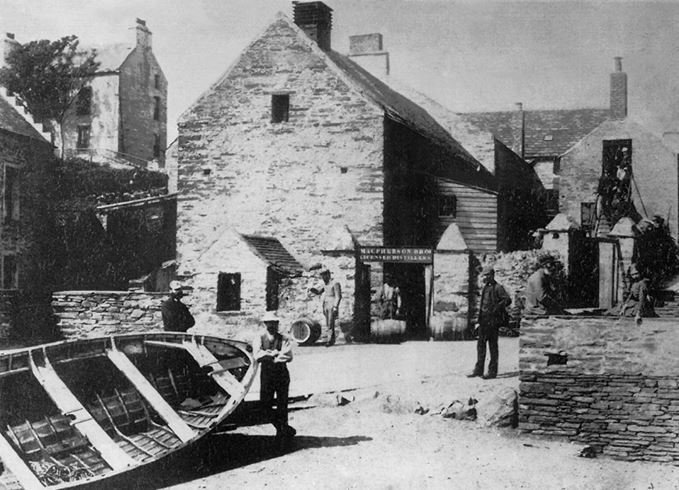 The Orkney Islands are located to the north of the Scottish mainland and comprise 70 individual islands, 20 of which are inhabited. Their history lies as much with Norway as with Scotland, and Norse places names and ancient archaeological sites abound.

When it comes to Orkney’s whisky-making heritage, most people recount the story of Magnus Eunson, sometimes named as the founder of Highland Park distillery. Eunson was a local church officer, illicit distiller and the man who allegedly hid casks of his whisky under a pulpit to prevent their discovery by the forces of the law.

Whether Eunson can really be credited with establishing Highland Park – officially dating from 1798 – or was simply making whisky in the High Park locale of Kirkwall, the island capital of Orkney, during the late 19th century is a moot point. The distillery owner, Edrington, prefers the version that it was founded by farmer John Robertson in 1798.

As with the origins of many distilleries, those of Highland Park are shrouded in mystery and myth, and whatever the truth of the Magnus Eunson story, Orkney’s distilling heritage is really about so much more.

Apart from Highland Park, there were half a dozen other licensed distilleries briefly active around Kirkwall during the 1820s, and a mystery persists regarding the existence of Kirkwall distillery, recorded as being licensed to one David Driver in 1821.

Island survivor: Highland Park was one of only two Orkney distilleries to continue operating into the 1930s (Photo: Orkney Library and Archive)

It has been suggested that Highland Park and Kirkwall distilleries were one and the same thing, but this is clearly not the case. Highland Park was owned by the Robertsons until 1826, when Robert Borwick became licensee, and it remained in the hands of Borwick family members until the 1870s.

Records show that Kirkwall distillery was licensed to James Drever – probably a variant spelling of ‘Driver’ – in 1825, and subsequent licensees were Thomas Fraser, James Drever, William Chisolm Quay and ultimately John Macdonald & Co. The distillery is described as being on East Road, some distance from Holm Road, where Highland Park is situated, and is last noted as active in 1881-82. A research project into Kirkwall distillery’s apparently obscure history is surely long overdue.

Meanwhile, in Orkney’s second-largest settlement of Stromness, in the south-west of the mainland, one distillery operated between 1825 and 1831, while a second enjoyed more than a century of existence, from 1817 until 1928.

It was established close to the harbour by John Crookshanks, and was named Stromness distillery, though its single malt was initially marketed as Man O’Hoy, after one of Orkney’s most distinctive landmarks, the red sandstone sea stack off the island of Hoy.

Global brand: The McConnells continued to export OO whisky to the US in the 1930s

Stromness was in the hands of no fewer than six individuals before closing in 1867, but 1878 saw it restored to use by the Macpherson brothers, who renamed the distillery itself Man O’Hoy and marketed its whisky as Old Orkney, or ‘OO’.

The Macphersons ran Stromness distillery until it was acquired sometime between 1900 and 1910 by Belfast-based J&J McConnell Ltd, but the harsh economic climate of the inter-war years forced its closure in 1928. It was subsequently owned for a time by Booths Distilleries, but the distillery buildings were demolished during the 1940s, and ultimately replaced by local authority housing.

When he visited during the mid-1880s, Alfred Barnard described Stromness as ‘The most remote Distillery in the Kingdom’, and wrote that: ‘In the little old-fashioned Still House are to be seen two of the “sma” old Pot Stills, each holding 300 gallons. One of these, a veritable smuggler’s Still of a peculiar shape, is the quaintest we have seen in our travels, and was formerly the property of a noted law evader; its body is shaped like a pumpkin, and is surmounted by a similarly shaped chamber one fourth the size, to prevent the goods boiling over, through which the neck passes to the head of the Still.’

By the time an undated brochure, written before the First World War and titled Farthest North, was produced by J&J McConnell Ltd, Stromness distillery had clearly been significantly upgraded and expanded.

The uncredited author writes: ‘The proprietors of the Distillery have modernized all that is possible to modernize in this primitive spot without interfering in any way with the old-style system of making good whisky. The very nature of the Distillery itself human hands cannot alter. The rock-hewn chambers, the “sma” auld stills (which still remain, though now unused, having been replaced by larger ones of the same pattern)... ’

Along with Highland Park, Orkney’s other surviving distillery is Scapa, situated two miles to the west, on the shores of the historically strategic bay of Scapa Flow. It was founded in 1885, at a time when Speyside was fast becoming the go-to location for new distillery builds, so why construct it on an island north of the Scottish mainland?

Part of the reason is that one of Scapa’s two founders, Robert Macfarlane – the other was Joseph Townsend – had managed Highland Park after previously being in business with his brother Daniel at Port Dundas distillery in Glasgow.

Vital position: Scapa distillery was built on the shores of the Scapa Flow. (Photo: pre-WWII; Orkney Library and Archive)

This meant he had first-hand experience of the island, its topography and logistics. The quality of Orkney peat for malting purposes was very high, and as Chivas Brothers’ archivist Chris Brousseau explains: ‘If we think of the times in 1885 as opposed to today, it made perfect sense. The movement was done by ship as it was on the shipping lanes for Aberdeen and the south.’

He quotes a newspaper reference to Scapa, published during the 1890s, which declares that: ‘The product of the Distillery, which is a Blending Malt Whisky, is well and favourably known in the trade, and the demand therefore is increasing every year. The carriage to and from the Distillery, being by sea, is cheap both for whisky and raw material.’

As well as being home to several distilleries over the years, Orkney also made a perhaps unexpected contribution to whisky-making on the Scottish mainland, courtesy of that high-quality peat previously mentioned.

The small island of Eday lies to the north-east of the Orkney mainland and for many years was home to the Eday Peat Company. Alfred Barnard noted the use of Orkney peat – imported from Eday to the Scottish east coast – in several of the distilleries he visited during the mid-1880s, including Auchtermuchty, Ballechin and Bon Accord, along with Strathisla and Miltonduff on Speyside.

Of Miltonduff, Barnard observed that ‘...only Orkney peats are used for drying the malt. The Orkney peats are said to be the finest in the kingdom. In the adjoining sheds we saw two ship-loads of this valuable fuel, which Mr Stuart had just imported from Edday [sic], in Orkney, for the following winter’s use.’ Distillery proprietor William Stuart also had an interest in Highland Park from 1868 until 1895, which may go some way to explaining how he knew that Orkney peat was of such excellence.

According to Eday Peat Company records, the Inverness distilleries of Glen Albyn and Glen Mhor were also customers, as was Glenmorangie, where the peat was unloaded onto Morangie beach from small cargo vessels. Glen Mhor continued to import Orcadian peat until the outbreak of the Second World War in 1939.

That same year, the recently re-opened Scapa distillery was also ordering peat from Eday, and as late as 1943, Scapa requested another 120 tonnes of it, perhaps being the last customer of the Eday Peat Company.

The late Orcadian writer George Mackay Brown once wrote that his fellow islanders were ‘Fishermen with Ploughs’. Clearly, they were also pretty useful with stills, too.