You can feel Scotch whisky – almost literally – in the air as you wander the streets of the Scottish capital. Home to some top-rate whisky bars and pubs, the city also lays claim to founding the world’s largest Scotch whisky company, along with a host of other bottlers and blenders. Felipe Schrieberg hits the streets to discover more about this vibrant city. 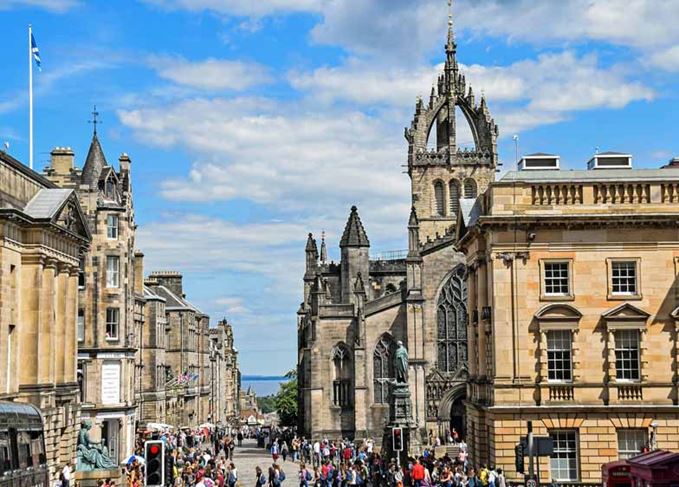 If you descend a certain set of stairs on West Nicholson Street in Edinburgh, you will enter the Ushers basement pub. And, until recently (at time of writing, the back area was closed for refurbishment), you would find that the backroom contained not only a small brewery, but also a workshop specially designed for blending whiskies.

Meanwhile, behind the bar, you can order not just Ushers’ own beers, but also a variety of blended malt whiskies they vatted themselves – to my knowledge, the only pub in Edinburgh to do this. Though not much frequented or particularly well-known among whisky geeks, Ushers occupies an important place in the Edinburgh whisky scene, because of both its location and its historical role in the wider context of whisky production in Scotland’s proud capital.

Many of Scotland’s distilleries lie in isolated and rural regions, such as Speyside and a variety of remote islands. However, it was in Scotland’s cities that whisky first became an internationally-known brand, with Edinburgh businesses leading the way to make blended whisky the towering global force that it remains to this day.

Edinburgh first became a focal point for the explosion and dominance of the whisky market in the 19th century, thanks to the issuing of a patent for the Coffey still, allowing whisky production on a much larger scale, together with access to railway lines and new laws (specifically, the Forbes-Mackenzie act of 1853 and The Spirits Act of 1860) that allowed different whiskies to be blended together.

The result: whisky production and demand took off – and Edinburgh was at the epicentre of the boom.

In the 1880s, the now gentrified Leith port area where Michelin-starred restaurant The Kitchin stands hosted warehouses for storing the largest maturation stocks in the world, almost all of them dedicated to blends.

To take one example, George Ballantine, who founded the Ballantine’s blend, made his start in the 1830s with a grocery store on South Bridge by the Royal Mile, where he blended whiskies together with great success.

In 1877, a new firm, Distillers Company Limited (DCL), was founded in offices on Torphichen Street, near the Haymarket train station. The company was the result of a merger of six Lowland grain distilleries that then absorbed various well-known blended Scotch whisky brands, including Haig, Dewar’s, Buchanan’s, Johnnie Walker and White Horse.

Ushers bar: The venue is thought to be the only pub in Edinburgh to vat its own whiskies

DCL is still around, although relocated to London under the name of Diageo, and has grown into the largest drinks company in the world. As well as owning the largest number of Scotch whisky distilleries, it also sells Guinness beer and Smirnoff vodka, among many other brands.

Walk around the corner from DCL’s old offices to Shandwick Place and you’ll find the old headquarters for the Scotch Whisky Association (SWA), the lobbying body for the whisky industry, though it recently moved to the trendy new Quartermile area in Edinburgh’s Old Town, near the National Museum of Scotland.

One of the most important names in the history of Edinburgh, and of the whisky industry, is Andrew Usher Jr. A pioneer of creating blended whisky, he sold it around the world, becoming one of the first exporters of whisky to Japan. Also a well-known philanthropist, he famously paid for the construction of Edinburgh’s largest music hall, Usher Hall on Lothian Road.

It is the Ushers’ family home – and later company office – that serves now as Ushers, the basement brewery pub where we began. And it continues the whisky blending tradition in the heart of the Old Town.

The Pear Tree, the pub next door which has the same owners, shares the building and is named after the two pear trees that once grew on the site. In fact, The Pear Tree’s famous beer garden was once a bonded warehouse for whisky casks.

Andrew Usher Jr left quite a legacy in Edinburgh – one that you can still smell on the city’s streets today. He co-founded the massive North British distillery in 1880, which is still operating in Gorgie, in the west part of the city.

Though many claim the famous ‘yeasty/malty’ smell permeating the entire city wafts from beer breweries, the truth is that the North British distillery is the culprit, even following an agreement with SEPA (the Scottish Environment Protection Agency) to stop it (which didn’t work).

North British is also the only Scottish whisky distillery today, to my knowledge, that traditionally produces corn (maize) whisky, as is done in the United States. However, the distillery is not open to the public, and it can be tricky to get hold of a bottle of the stuff, since almost all of it is destined for blends. But it’s not impossible. With luck, you can find the odd bottle at the excellent shop Royal Mile Whiskies, facing St Giles Cathedral on the Royal Mile.

House blends: Stop by Cadenheads at the lower end of the Royal Mile to sample its four cask strength whiskies

Look closely and you can still find traces of Edinburgh’s history of whisky blending, and in new forms. In addition to Ushers, other small, independent businesses are selling excellent boutique blends.

At Campbeltown-based Cadenheads’ Edinburgh outpost near the Scottish Parliament at the lower end of the Royal Mile, four cask strength house blends, each based on a different whisky-producing region and with their recipe constantly changing, are available to purchase at budget-friendly prices.

Then continue just down the road to Robert Graham, a company founded in 1874 by a Glasgow tobacconist, before it was sold and re-established in Edinburgh in 2002. Apart from whisky and tobacco sales, it is an award-winning independent bottler, offering blends, single malts and single cask whiskies.

In its Canongate shop there is a ‘living cask’, regularly topped up and available to purchase in small bottles. Nor is Robert Graham the only Edinburgh bottler. Edinburgh Whisky Ltd also creates its own blends, as well as serving up single malt bottlings through its Library Collection series.

You can also stop by for a drink at the iconic Scotch Malt Whisky Society (SMWS), which exclusively bottles some of the best cask strength, single cask whiskies you will ever find. The company has a clubhouse in Queen St in the New Town, as well as its sumptuous headquarters in Leith.

Or, for something more accessible and suited to the less whisky-literate, there is the perhaps slightly corny but extremely informative Scotch Whisky Experience, located by Edinburgh Castle. There’s nothing quite like their Disneyland-style ride, taking you on a whirlwind tour of Scotch whisky.

There is certainly more than enough whisky blended and/or sourced by Edinburgh businesses today for you to enjoy a healthy and delicious tasting selection. These companies follow the practice of how Edinburgh first became a whisky capital: small businesses taking different whiskies and mixing them together into something new and good to drink, or finding interesting whiskies to sell on under their own brand.

And, with a new single malt player, Holyrood Park Distillery, planning to open its doors in 2018 right next to Arthur’s Seat, we may see a new kind of whisky boom in the capital. Edinburgh’s greatest whisky days may be yet to come.