One of the most coveted gigs in the festival calendar, Edinburgh’s Whisky Fringe (10-12 August) attracts an audience of devoted fans amid the chaos of the city’s wider cultural extravaganza. Tom Bruce-Gardyne reports. 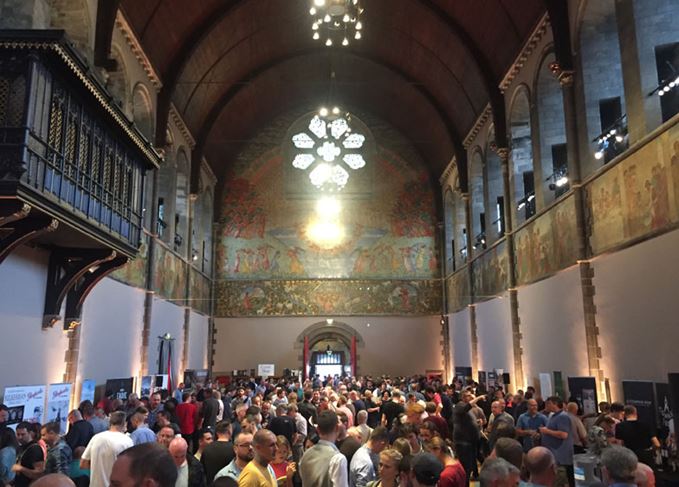 It is August, it is Edinburgh, and for some 1,500 whisky lovers that means just one thing: the Whisky Fringe. Throughout the city there are queues day and night for trapeze artists, drag queens, bicycle poets, cabaret divas and the odd stand-up comedian, who collectively make up the Festival Fringe. But nothing quite compares to the long line of people waiting outside the Mansfield Traquair on Broughton Street for the 2pm opening of this three-day whisky fair. When the tickets were released by Royal Mile Whiskies at midday on 13 March, they had all gone in just a few minutes.

As Scott Adamson, Tomatin’s global brand ambassador, puts it: ‘If AC/DC did their final gig, the Whisky Fringe would sell out quicker.’ Though to be fair to the Australian rockers, they would pack a venue many times the size of this former church, while axeman Angus Young would probably blow the stained glass windows with his opening chord. Arthur Motley, Royal Mile’s purchasing and sales director, says: ‘Last year I spoke to a guest who finally got a ticket after years of trying, who said: “Oh, it’s like the other festivals, but it’s nicer I suppose.” He sounded a bit disappointed, but I got his point. It’s a simple, relaxed festival, and its success has been that we have resisted the temptation to hike prices for suppliers and customers.’

When the Whisky Fringe made its debut in 2001, ‘the inspiration was to give whisky a presence amidst the very international and multi-cultural goings-on that descend on Edinburgh during August,’ explains Royal Mile’s director, Keir Sword. ‘Eighteen years ago, whisky’s only presence within the Festival was entirely extra-curricular.’ It opened in the City Chambers as just another show in this month-long city of shows. At the time there was no real ‘whisky calendar’ to fit into. Since then it has transcended those other ‘goings-on’ and could presumably float off to another, less frantic month with equal success, although it might clash with one of the other myriad whisky festivals that have sprung up in the meantime.

Coveted simplicity: Edinburgh Whisky Fringe has a more ‘relaxed’ vibe than other festivals, but is just as popular

Avoiding August would certainly make the business of finding somewhere to stay easier for Whisky Fringe fans, but you would lose that Festival buzz. Mercifully there are no plans to shift dates, or to relocate to somewhere bigger that would allow for more than 30 stands and for visitor numbers to swell beyond the 500-a-day limit. Securing the Mansfield Traquair, after those early years in the City Chambers and Signet Library, was either a fluke or a stroke of genius. Everyone I spoke to at this year’s show mentioned the venue – a beautifully restored neo-Romanesque church famed for its arts and craft murals.

Whether the building’s former life inspires restraint, if not sobriety, is anyone’s guess, but Hugh Muir, UK sales director at Hunter Laing, says: ‘Well, if you’ve got 500 people in the body of the kirk, you might have only two or three with a large intake of alcohol, I think that’s a very good ratio.’ To be honest, it is probably down to having enough space to allow a relaxed and easy engagement between visitor and exhibitor. Tony Reeman-Clark of Strathearn distillery says: ‘I’ve been to so many shows where the crowd just shuffles from one stand to the next, and where the whisky’s poured off a speed rail. Whereas at the Fringe you can sometimes have a long conversation until people wander off and you realise you haven’t even poured them a drink.’ He has a special fondness for this event, for it was here, seven years ago, that he had his Eureka moment about becoming a distiller. And who knows – maybe someone this year had a similar epiphany.

Hunter Laing has been a regular exhibitor at the Whisky Fringe alongside Springbank, Compass Box and Adelphi, and are among the smaller players who rub shoulders with the relative giants of the industry. Stands are oversubscribed and this year Gordon & MacPhail missed out, as did Diageo in 2016. There is no formula as to who gets in, but the balance feels about right. ‘The fact that we sell out means the same people don’t get tickets every year, and to some extent that applies to the stands,’ says Sword. While this may help keep things fresh, he concedes that ‘the number of new distilleries will become an increasing issue’.

Concept boards: The idea of the ‘half-time orange’ is a new one to whisky fans more familiar with other festivals

This year saw the debut of Daftmill whose farm distiller, Frances Cuthbert, was finally able to open a few bottles of his 12-year-old, and it was a first time for R&B Distillers and GlenAllachie. Meanwhile, downstairs, Glen Scotia had transformed a boxy, non-descript room with some moody lighting and a few casks into something approaching a distillery warehouse. Master distiller Iain McAlister poured us a 29-year-old malt fresh from its refilled Sherry cask, and Victoriana with its sumptuous blend of oak sugars and caramelised fruit.

Among other magnificent drams were the 40 chosen by each stand as their ‘half-time orange’. This is where exhibitors pull out a special bottle when a whistle blows at 4pm, causing a delicious quandary among punters, for only one orange is allowed. For fans of old grain whisky there was The Cally 40-year-old from the defunct Caledonian distillery, and a 1996 North British bottled by Hunter Laing. There was Delilah XXV from Compass Box, Strathearn’s first peated cask and my personal choice – James Eadie’s pitch perfect, smoky-sweet 10-year-old Caol Ila, finished in a Palo Cortado cask.

The solution to the above dilemma, as many couples and small groups realise, is to pick different drams, meet in the middle and share. The uniqueness of that half-time orange, plus the £10 voucher included in the ticket, clearly makes the Whisky Fringe good value. Given the demand, Royal Mile Whiskies could probably double the price, making the event more exclusive, more anorak-y and probably less fun in the process. It is a real credit to Sword and his crew that they haven’t done so.