The copper gleam of a still is a vivid and resonant image for any whisky enthusiast. Distilleries take great pride in keeping them in tip-top condition, and no two will have quite the same shape or size. But why? Is there more to their design than meets the eye? The Whisky Professor tells all. 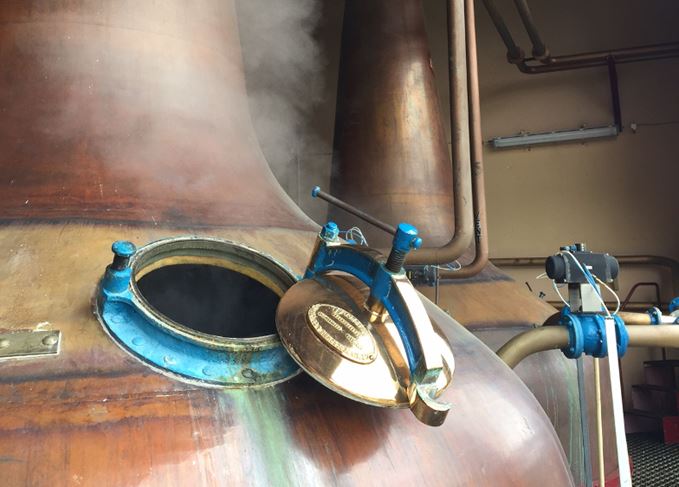 Royal Brackla: Its stills have an upward-pointing lyne arm for additional reflux

When visiting a distillery recently, we were told that if a still needed to be replaced, the coppersmith would replicate every dent and bash in it to ensure that the flavour of the spirit remained the same. Surely they were having a laugh? The shape of the still doesn’t matter that much? Does it?

Does size matter?: The Whisky Professor explains the importance of stills’ shape

Many thanks for your letter. I know it is easy to think, when you walk into a still house, that the pots are there for aesthetic reasons, but the shape and size of a still has a significant effect on the character of the spirit being produced – and it is all to do with copper.

Copper was first used to make stills because it is malleable and can be worked into shape easily. It’s long been realised that it also has its own properties that are a significant aid to distillers, which is where shape comes in.

It is all to do with something that Mike Nicolson, the guitar-toting, cigarette-smoking master distiller, calls ‘conversation’.

Let’s go back one step in the process. The wash made in the fermenters is a complex broth of different flavour compounds known collectively as congeners. What distillation does is concentrate these (because alcohol boils at a lower temperature than water) while the distiller collects the specific flavours he or she wishes in the second distillation.

Some of these compounds – sulphur, for example – are categorised as being ‘heavy’. This is where copper begins its chat. If you were to look at the surface of a piece of copper under a microscope, you’d see that it looks like a Brillo pad. It’s this pitted surface which snags the heavy compounds in the vapour, allowing the lighter ones to continue their journey upwards.

This means that the longer the conversation is between vapour and copper, the lighter the spirit will be. I think of the copper as being like a psychiatrist. The longer the spirit talks to it, the more it unburdens itself.

Height difference: A taller still is more likely to produce a light spirit

There are various ways in which you can further extend (or shorten) that conversation. Putting a small amount of spirit in the still makes more copper available, while running the still slowly also prolongs the potential conversation.

There is another element at work: the process known as reflux. This happens when some of the vapour meets a cooler surface inside the still, turns back into liquid, falls back down the still and is re-distilled. The more reflux there is, the lighter and more complex the spirit will be.

Again, shape plays a role. A tall still will have lots of reflux, as will stills that have boil bulbs at the base of the neck. ‘Lamp glass’-shaped stills, which have a narrow waist and then flare out, will also promote reflux.

The angle of the lyne arm also has an impact. If it points upwards – think of Glen Keith or Royal Brackla – that copper conversation and reflux is further extended. A downward-angled lyne arm – Macallan again – stops the conversation in its tracks and helps to gather robust flavours. Condensers also have their part to play in this, but maybe we can chat about that at a later date, if anyone’s interested. I’d hate to be boring.

It’s important to understand that heavy is not bad. Distillers choose the shape of the still and manage the way it is run in order to produce the specific congeners that create the distillery’s unique character. A heavy, sulphury spirit is desirable in many cases.

You may have noticed that I’ve not said tall stills automatically make light spirit. Distillers can run the stills in the opposite way to which they were originally intended. Royal Lochnagar is a great example. It has very small stills, which should mean a short conversation and a heavy spirit, but the stills are filled very low, the distillation is slow and, after every spirit run, they open the manholes to allow air into the still.

The reason for this is that, eventually, the copper will become clogged up with all of those heavy elements and won’t be able to remove any more. Opening the still allows air in. This, in turn, rejuvenates the copper, allowing it to be really effective at holding on to those heavy compounds. Result? A light spirit – albeit one with some heavier characteristics. The shape does still play a part.

Conversely, a tall still can be run in a way which deliberately exhausts the copper. Result? A heavy spirit, but this time it will be one with extra complexity because there’s still reflux going on, just without the extra influence of copper. Talisker’s wash stills are a good example of that.

So, although I’m not sure whether every dent and bash is ever replicated, shape does matter.