Why some distilleries use fire-heated stills

10 September 2019 by The Whisky Professor

There was a time when all Scottish distilleries heated their stills over gas or coal fires, but only a handful continue to employ the method. The Whisky Professor explains how steam-heated stills became the norm, and how the two methods affect whisky’s flavour. 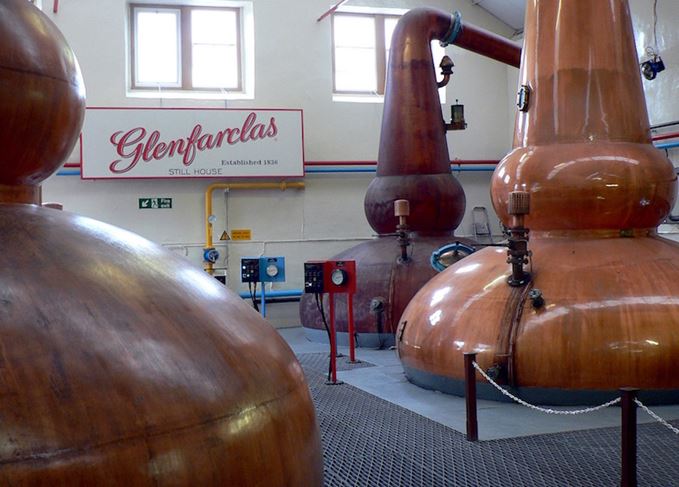 Scotch rarity: Only three distilleries continue to heat their stills with fire, but why?

In my (limited) travels around whisky distilleries I’ve spotted that they all heat their stills with steam. I’ve been told that some used to use direct fire but that because it was too dangerous they all switched to steam. Do any still use direct fire, and if so why do they continue to use the method? What difference does it make, if any, to the whisky?

Hot stuff: The Prof sheds light on why some distilleries choose fire to heat their stills

As you correctly point out, heating a still over live flame is a rare occurrence these days. In Scotland, only Glenfarclas, Glenfiddich and Springbank continue to use this method, as did Dornoch until early 2019 when it switched to direct electric.

At one point, all stills would have been heated with direct flame but this was slowly usurped by steam pans/coils, and these days external heating systems. Out of interest, Glenmorangie was the first Scotch malt distillery to install steam-heated stills – in 1887.

The few in Scotland that persist with the older technique all say the prime reason for retaining a more expensive heating method is to do with flavour. The most famous example of this is Glenfarclas, which in 1981 ‘upgraded’ to steam only to find that it had a detrimental effect on its new-make character. The steam heating systems were removed and direct fire reinstalled.

If you ask an adherent to direct firing what this elusive character is, they will talk about variations on the theme of ‘weight’. This was behind Suntory’s decision to remove steam from all the wash stills at its Yamazaki and Hakushu distilleries and install direct flame, a move that runs counter to common practice.

What prompted the Japanese distiller to make the decision? ‘Our experiences show direct firing in distillation can create more complex and deeper flavour in new-make whisky,’ says the firm’s chief blender, Shinji Fukuyo. ‘In our experience, this is more effective when the wash stills are heated with direct fire.’

Different design: Direct-fired stills have a convex base and are fitted with a rummager (Photo: Glenfiddich)

Why should this be the case? While Suntory’s research is ongoing, Fukuyo does mention some hypotheses, such as ‘super-heating, burnt yeast and so on’, but adds: ‘We don’t know the mechanism.’

The weightier result produced by direct fire does seem to be related to temperature inside the still. A still heated in this way will reach significantly higher temperatures (up to 650˚C) helping to produce a different set of reactions in the wash.

The intensity of the heat can then cause any residual particulate matter in the wash [dead yeast cells, barley husks, sugar compounds, proteinsand dextrins] to stick to the inner surface of the copper in the same way as steak placed on a hot griddle pan will start to brown.

This Maillard-type reaction inside the still will help to create a range of different flavour compounds. There could be an increase in sulphur, some vegetal aromas and a rise in a compound called furfural, which ultimately is derived from the hemicellulose in the barley husk. At its most extreme furfural can give a burnt chocolate effect. At lower levels it helps provide caramel /nutty aromas.

Excessive burnt aromas can be avoided by preheating the wash and gently raising the temperature in the still, which is not as easy (though far from impossible) in one heated with live flame compared to the greater control and lower temperatures provided by steam.

The extremes of heat in a direct fired still can also produce ‘hot spots’, something that was more prevalent in coal-fired stills. Though gas burners will produce a higher temperature, the flame is even compared to that coming from a coal fire.

Down under: All the stills in Glenfiddich’s ‘stillhouse 2’ are heated by gas fire

The presence of these hot spots caused some debate at Ardmore distillery when it had to switch from coal fires to steam in 2001. Believing that they imparted a specific character to the new-make spirit, the steam coils were designed with kinks in them to attempt to replicate the effect.

Running a coal-fired still took great skill. Steam and gas flame can be easily controlled in order to get an even boiling rate, whereas with a coal fire the stillman had to think ahead and anticipate when the fire needed to be increased or dampened down. The last coal-fired stills in Scotland were at Glendronach and were removed in 2005. To the best of my knowledge the only distillery which still uses this method is Yoichi in Japan.

Direct fire also necessitates having a different design of still, the base of which has a convex base to allow the gas fire to burn evenly in the centre. Because of the intense heat the gauge of the copper is also heavier.

To avoid any burnt aromas, the stills are also equipped with a rummager, a chain which rotates around a gear shaft and cleans the copper.

While direct fire is a rarity these days in Scotland, I asked Suntory’s Fukuyo whether, given the firm’s experiences in Japan, it may consider reinstalling it in some of its Scottish estate?

‘We are always considering raising the quality of our whisky in any way, not just direct firing,’ he said. ‘But at the same time, when they are introduced, we should consider other factors and influence on our whisky-making – the cost, any environmental impact, as well as health and safety.’ Is that a maybe? Only time will tell.

Hope this answers your question.