Ahead of its Scotland-wide tour of distilleries, whisky-themed opera Navigate the Blood was well-received on its opening night, performed amidst the copper stills of Glasgow distillery. Tom Bruce-Gardyne reports. 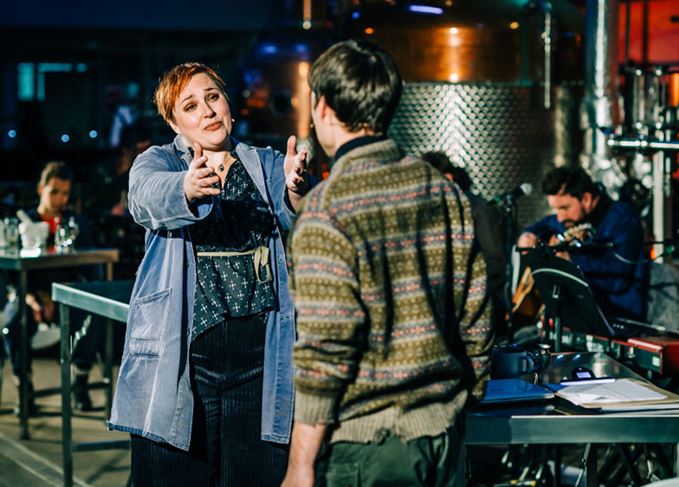 Enchanting story: Audiences were captivated by Navigate the Blood’s tale of mystery and transformation

Between an array of beautifully lit copper pots and pipes on one wall, and a stack of casks on the other, was a line of musicians and singers giving it their all, and an audience seemingly entranced. This was the world premiere of the opera Navigate the Blood, and for those who were there last Friday night (2 November) it was quite an experience. And quite a venue in the Glasgow distillery, housed in a light industrial shed on the eastern fringes of the city.

Noise, the operatic company responsible, was founded partly with the remit of bringing opera to the masses and taking it out of the opera house to places it rarely ventures. A distillery is its most extreme venue to date and is almost certainly a first for Scotch whisky, but with the tour set to continue to Oban, Glen Scotia and others [see below] it could be the start of something big.

Either way, it works perfectly for Navigate the Blood, which is set in a fourth generation distillery somewhere in rural Scotland, and opens with Bob and Lena McCredie and their Polish assistant, Agata, having just won a gold medal for their single malt. But this being opera, we soon learn of the dark tragedy at the heart of the McCredie family whose son Liam disappeared over three years ago.

The choice of name was not entirely random, for it was Liam Hughes, the boss of Glasgow distillery, who dreamed up the idea of hosting an opera in the first place. It happened when he met the composer Gareth Williams at a dinner in Glasgow four years ago and the two discovered they had been at the same school in Armagh, albeit a decade apart. If others thought the idea totally bonkers, it’s an epithet that has never really bothered Hughes. After all, many thought the same of his decision in 2012 to open Glasgow’s first standalone malt distillery for over a century.

He hadn’t actually distilled a drop before the idea of doing an opera was hatched, which suggests the incubation period for this art form is even slower than Scotch whisky, now that the distillery has bottled its first run. Artistic director at Noise, James Robert Carson, explains the process: ‘You have to write, as it were, the play or libretto, before you can set it to music. The composer will take the libretto, elongate words, repeat lines and basically turn it into an opera.’

Early on it was decided to make Navigate the Blood a collaboration with the Glasgow-based indie-folk band, Admiral Fallow. This proved a wise move not just musically but in terms of distillery contacts, as Iain McAlister, Glen Scotia’s manager, is a big Admiral Fallow fan, as is Diageo’s Steven Dye who introduced Noise to Oban and Blair Athol, both upcoming venues for the performance. Researching the opera involved plenty of distillery visits on Islay and around Glasgow, and presumably the odd dram as well.

Having sung of their gold medal, Bob (Jamie MacDougall) and Lena (Shuna Scott Sendall) begin to argue, operatically, with Agata (Klaudia Korzeniewska) who is desperate to make gin. She finally gets her way in Act II in a scene whose rousing chorus celebrates the spirit’s intoxicating effects:

For some, the idea that gin might get the best lines and prettiest star – certainly compared to Bob, the traditional face of whisky making in his stripy pyjamas and dressing gown, may sound subversive given the setting. Then again, Glasgow distillery is proud home to Makar gin which flowed in countless G&Ts throughout the interval. But whisky enjoys some good songs too, including a wonderful take on Raphael Holinshed’s classic 16th century eulogy to the water of life. How, ‘Being moderately taken …[it] preserveth the eyes from dazelying, the tongue from lispying, the teeth from chatterying, the throte from rattlying…’ and so on.

Distillation was clearly a source of inspiration, as the programme notes explain: ‘In an almost alchemical way earth, water, fire and air blend together to make whisky. In the same way the characters in this opera unite to make a story about mystery and transformation.’ Without giving too much away, a fourth character suddenly arrives at the distillery with an uncanny resemblance to Liam and who becomes his spiritual embodiment in many ways.

If your ear is as unturned to opera as mine, you won’t catch every line, but the programme carries a useful synopsis if you lose your way. Added to which there is plenty to enjoy in the percussive rhythms of Admiral Fallow and the rich soprano of Lena whose expressive features are full of grief and pathos one moment, and unbridled joy the next. Gradually she and Bob come to terms with losing Liam and gain strength from the therapeutic power of work and the redemptive nature of whisky and gin. At least I think that was the gist of it.

Judging by the cheers, whistles and prolonged applause from the packed out opening night, Navigate the Blood went down a storm in Glasgow, and we’re not talking about the city’s cultural heartland of the West End, but a business park in Hillingdon. This bodes well for the opera as it heads deeper into Scotland on its three-week distillery tour.

The fact that Liam Hughes managed to drag his kids to the opera, possibly a first among teenagers anywhere, is another positive sign. ‘They were kicking and screaming on the way there,’ he says, ‘but they haven’t stopped talking about it since.’

The 2018 Navigate the Blood tour dates: