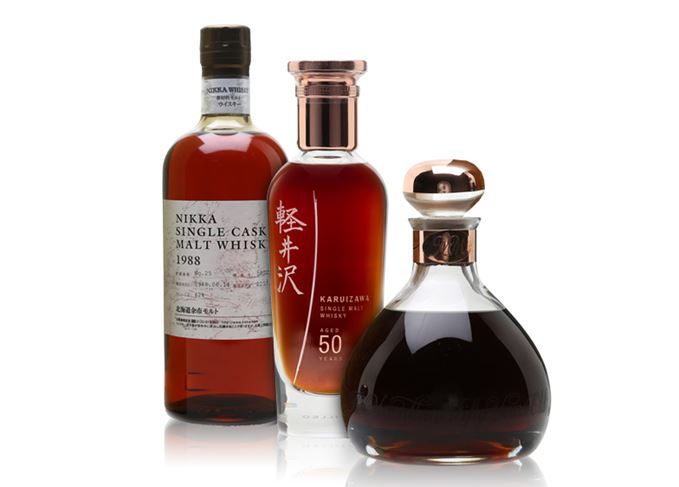 Showstoppers: Rare Karuizawa, Macallan and Yoichi bottlings were part of the 'one of a kind' auction

The final total is over £150,000 more than the auctioneer’s initial estimate of around £200,000, made when the auction was first announced in September.

The most expensive whisky sold was a 50-year-old Karuizawa, one of only two in existence, which fetched a hammer price of £100,100.

The rare whisky was donated by spirits retailer The Whisky Exchange, with co-founder Sukhinder Singh proclaiming it ‘possibly one of the best whiskies I've ever tasted, full stop’.

Auction director Isabel Graham-Yooll said: ‘Obviously the Karuizawa 50-year-old was the most spectacular star of the auction, but I was so pleased with the prices for all the bottles.

‘It was particularly exciting watching the bidding during the closing moments of the auction... There were a lot of bidders who knew exactly how special these bottles are.’

Although the Karuizawa achieved the highest hammer price of the auction, it fell short of the world record for the most expensive Japanese whisky sold at auction, set by a bottle of 50-year-old Yamazaki which sold for HK$2,695,000 (£270,000) in August.

Good spirits: All proceeds will be given to charities fighting harmful plastic pollution

The second highest hammer price of £32,500 was earned by a 50-year-old Macallan Millennium Decanter bottling distilled in 1949, described as ‘the best Macallan ever bottled’.

Graham-Yooll said: ‘Distilleries and bottlers donated truly exceptional one-off bottles that were created especially for the auction, and we are proud have raised so much money for charities battling plastic pollution.

‘We want to completely change the world’s attitude to plastic pollution within a generation.’

The auction’s main beneficiary, the environmental charity Plastic Oceans, focuses on educating the public on the dangers of plastic pollution, placing particular emphasis on schoolchildren and changing government policy.

The full list of lots and hammer prices sold as part of the auction are available at whisky.auction.