Sandy Hyslop is best known as the master blender behind Ballantine’s, Glenlivet and Chivas Regal, yet his passion for whisky is rooted in an appreciation of the past. He tells Angus MacRaild how collecting led to a career in whisky. 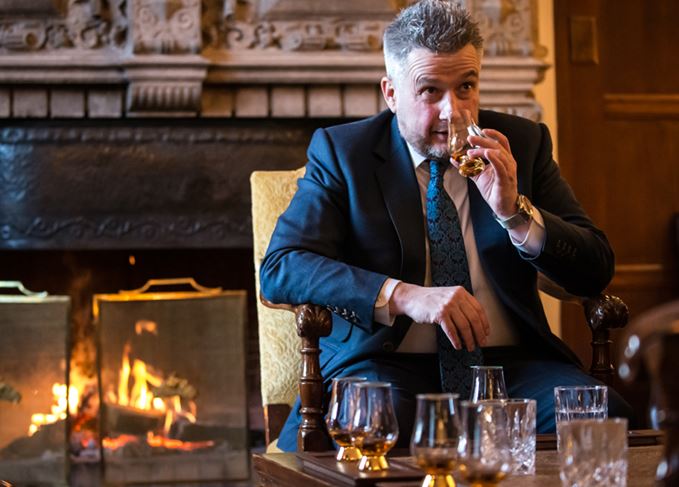 Stereotypes exist for a reason. Mention the term ‘whisky collector’ and images of beards, hoarding, clutter, cupboards brimming with bottles alongside empty fridges, and long-suffering spouses are brought to mind. No doubt, you’re familiar with the themes. The reality, of course – as with all typecasts in life – is more complex. While on the surface Sandy Hyslop, master blender for Chivas Brothers, might tick a few of those boxes, he confounds them in other ways.

We meet at Chivas’ site in Kilmalid, Dumbarton. If you ever want an idea of just how vast the ‘bread-and-butter’ blending side of Scotch whisky is, this is a good place to visit. Here sits a sprawling industrial complex of automated overnight packing operations, bottling halls and cask pyramids, all due for imminent expansion. At the heart of all this lies a small, unassuming building housing Sandy Hyslop and his team of blenders. Out of here recipes are hatched, scaled up through the engine of this vast operation around them and sent on their merry way into the world.

Hyslop was a collector before becoming a blender [read all about his day job here]. His career began back in 1994 at Allied Distillers before joining Chivas as master blender in 2005. ‘My father was in the antiques trade,’ he explains. ‘It meant I always had an appreciation of the value of things. I’ve always been a collector – cars, glasses, watches – my Instagram is full of watches.’

Much about Hyslop’s career is reversed. Instead of blending leading to collecting, he brought the passionate fascination and geekery of a collector’s mentality to his trade as he learned the ropes. ‘As I worked with all these different brands and products I always tried to get a bottle of each thing I worked on.’

Memorable career: Hyslop’s whisky collection has grown through his work as a blender

One of the collector tropes that Hyslop does nothing to dispel is that of clutter. ‘Now, I warn you, this isn’t a “show blending lab”,’ he says with an ill-concealed grin as we approach his workspace, ‘this is the real deal.’ Indeed, it is a thrilling library of row upon row of sample bottles. It’s hard not to get lost picking through the myriad labels to see what gems and curiosities lie amidst the commendable and gentle disorder. Old memorabilia glints out from between stacks of samples and scattered books. Across the hallway in his office the situation is much the same, only here the focus is unashamedly on old brand memorabilia and bottles.

‘I love the old memorabilia. Being a blender and being responsible for these brands, it’s about holding onto a sense of that heritage. The first thing I worked on was Stewart’s Cream of the Barley so I always try and grab anything to do with that. It’s a real mix of bottles and memorabilia that I go for, although I’m not out chasing bottles at auction – I can’t afford those prices.’

His reply pre-empts my next question: what does he make of today’s secondary market prices and the notion of investment? ‘It is hard. If I were to go through all my bottles and tally up everything I’d probably be frightened by how much it all cost. I’ve got some terrific old things like Laphroaig 30 and GlenDronach 1968. But then what am I going to do if I sell them all? They’re a record of my career and I enjoy the history of it all too much – no, I couldn’t sell them.’

That’s not to say the concept of investment hasn’t worked its way into his job as a blender. ‘A lot of projects we’re doing now are driven by the interest in collecting and investing,’ he says. ‘This year we’re looking at doing a number of different casks of Glenlivet for our various markets.’ It’s a crucial point where the mutual aspects of fandom and professionalism intersect for Hyslop. ‘It’s something I really love doing; we go through all these casks with the team together. It’s a great way to get to know a distillery profile inside-out; you’re looking at refills, first fills, fresh Sherry, different cask types and ages.’

Do a bit of online digging about Hyslop and it becomes quickly apparent that enthusiasm and passion are qualities for which he’s well-renowned. Our discussion is notionally about whisky collecting, but it quickly tangents into blending, history, branding, production techniques and many other aspects of whisky. Does being a collector affect the way he approaches his job? ‘Not really. I know what I have to do with all these brands and I take that responsibility very seriously. Although, there will be things I’ll be working on and I’ll really look forward to receiving a bottle. Something we’re doing at the moment is a new Chivas blend of 100% grain whiskies and its really terrific stuff. I’ll definitely get one of them.’

What drives Hyslop as a collector of whisky is a personal connection to brand and history. He is also aware that collecting is motivated by an intense love and fascination of the liquid itself, although it’s a subject where he must take a pragmatic approach.

‘I think today’s whisky is far easier to work with than the stuff we were using 20 years ago,’ he says. ‘The consistency is just so much better. You don’t have so many different workers coming on shift each day doing things the way their father or grandfather taught them – those kinds of inconsistencies are gone.’

Many would argue that it was precisely this kind of human proximity and influence on the final spirit that gave many old whiskies their character. However, spirit character is very much at the forefront of what Hyslop does. He says: ‘It’s the number one focus. If the yield is a little down that’s not such a problem for us, provided the character is good and correct.’

For Hyslop, the sense of variation within a house style that both collectors and drinkers enjoy is something that he sees as being part of the blender’s responsibility. ‘When we’re making Aberlour A’Bunadh for example, we’re always looking to vary from batch to batch – I know people are going out and buying two bottles and drinking one and comparing it to previous batches. We love it as well; it’s great fun playing around with the recipe and tweaking the age and cask profile.’

There’s a dual sense of delight and responsibility that Hyslop brings to his job. The fact that he’s only the fifth master blender of Ballantine’s in almost two centuries clearly holds sway over his sense of self as a collector and a blender. All the memorabilia and old bottles – many of them open or empty – are a constant reminder of the history and cultural relevance of the names and whiskies he is responsible for as their caretaker. For instance, he takes the task of keeping bottlings such as Ballantine’s 17-year-old at a certain level of quality, very seriously.

‘Ballantine’s 17 I see as my most important responsibility,’ he states. ‘It’s such an iconic and loved whisky. If it ever dipped in quality we would really know about it, and it would be very damaging, so that’s something I’m always very focused on.’

In today’s increasingly intense and often polarised whisky world, speaking to Hyslop is a reminder that there are both similarities and distinctions between those who consume and those who create whisky. Just as he points out that the language we all use as a framework to describe whisky’s flavour is often different and personal, so too are the reasons and motivations for people to collect. Hyslop’s passion for the people he works with, his team of blenders, the distilleries and their workers, is all reflected in the bottles and memorabilia he collects.

This passion emerges again as he pours us both a dram of a 1950s bottle of Ballantine’s 30-year-old. ‘The 30 always had this sweetness – that Sherry note is just stunning,’ he observes with a grin. ‘There’s nothing better than seeing the whiskies you laid down early in your career come together in new bottlings.’

Is he ever intimidated or overwhelmed by the sheer number of different blends, malts and brands he has to juggle? He answers with another characteristic grin. ‘Not a bit of it. I love it.’ Love for whisky, like the drink itself, comes in many shades and flavours. Speaking to Sandy Hyslop is a timely reminder of that.