A very expensive date with Diageo

For a whisky newbie, understanding how a bottle of liquid can be worth more than a month’s rent can be troublesome. So, when invited to the launch of Diageo’s 2017 Special Releases, the Whisky Virgin found the perfect opportunity to sample some high-cost, high-quality drams and attempt to discover what exactly makes them top dollar. 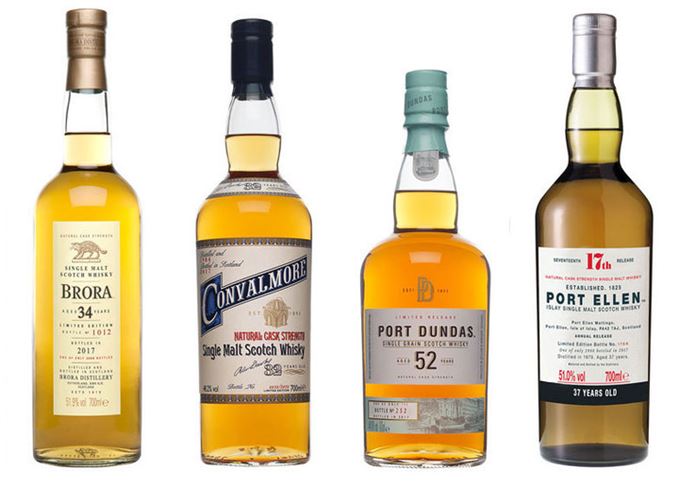 Something special: Four Diageo 2017 Special releases, worth a combined £6,000

As part of my continuing effort to learn about the baffling world of Scotch, your boy’s riding some coat-tails into the Diageo Special Releases party. This annual shindig is apparently where booze titan Diageo pours the fanciest, and indeed schmanciest, whisky it has.

When I arrive, the ritzy Marylebone venue is already stacked to the rafters with whisky veterans. Security fails to sniff me out for the novice I am and I infiltrate the joint like a spy.

I sidle up to a table and a nice lady everyone’s calling Maureen (presumably the bartender here) pours me a dram from a bottle labelled Convalmore. At 32 years old, it’s about the same age as A-ha’s Take On Me.

It’s intense stuff: all pastries, fruits and nuts. I almost feel like I’m in the 1980s itself. I’ve got a new favourite whisky. I have to get one for the gaff, expand my Scotch collection to two bottles.

‘Excuse me friend, how much does a sauce bottle of this calibre set you back?’

What? £1,200? I can’t afford this glass – it’s got about a week’s rent in it. They should tell you how much it is before the order goes through, like at Nando’s. I eye the security guys on the door and wish I was wearing my runners. Damn you, smart casual dress code.

How can it be that I recently bought a perfectly good bottle of fighting juice for 20-odd quid and this one costs one-point-two stacks? Helpfully, the crowd I’m running with is keen to educate me.

First thing I’m told is that, for its 32 years, this whisky has been in a barrel, mellowing out and getting tastier and more elegant with age; like a George Clooney or a Juliette Binoche. During that time, some of the original liquid has evaporated and the whisky makers have wound up with less, but better, booze. Makes sense to me, but the question remains: how am I going to pay for it?

The ‘bartender’: Maureen Robinson also happens to be a master blender for Diageo

I steady my nerves with another slurp. Seems to me that if I’m going to have my limbs broken by the whisky mafia over an unpaid bar bill, I might as well double down. What other kinds of luxury super-hooch can I scarf before justice catches up with me? I offer Maureen a swift nod of thanks and slide over to the next table.

Grain whisky, 52 years old? Don’t mind if I do, chief. Excellent gear, I like the way it tastes of blackcurrants and cream, and falls well within my price range. Port Dundas, you say? Yes, have a couple of bottles sent to my club – I’m wealthy, you see.

The suited fella doing the pouring tells me that this is one of only 752 bottles in the world. I also learn that most grain whisky is sold before it has a chance to get all Binoche and brilliant. One of this age is unusual and so commands more scratch. Too rich for my charlatan blood, but maybe not a bad way to burn around 750 of your pounds, if you’ve got them.

‘Add it to my tab,’ I say with what I intend to be a confident wink, but looks like a nervous twitch. Canapés go by and I try to be discreet as I stuff my pockets with tiny risotto balls.

‘Don’t worry,’ he says, mistakenly thinking I’m kidding. ‘This is on us.’

Relief. Understanding. I realise that the room isn’t just full of Scotch fans with mad bank. The ravenous-looking people lurking by the kitchen door and hoovering up charcuterie are journos. This is a PR thing, a schmooze – and be schmoozed I shall.

I sprint around, snaffling complimentary (!) smoked salmon and then hit another whisky stand. A lovely fella called Donald slings me a Scotch called Brora. The label has some kind of vicious beast on it – a proud Scottish panther, maybe? It tastes of chocolate, spices, fruit and smoke; probably what it feels like to burn down a sweet shop for the insurance money.

Now I’m told that this Scotch has been barreled up for 34 years and that storing it safely for all that time takes care, expertise and big piles of cash. Being that it comes out at £1,450 a bottle, I can only guess what the rent on a barrel-sized bit of Scottish warehouse is. Must be even more than I drop monthly on the guardian scheme I share with six other people, in a haunted swimming pool, in Zone 4…

Anyway, where to next?

The name I keep hearing whispered with hushed reverence is Port Ellen. When I find it, I’m surprised by how modest the bottle is. For the hype around it I was expecting a crystal decanter, with a big old diamond for a cork, and maybe a dinosaur leather case to keep it in. But no, the price tag is £2,625 and apparently that’s all in the liquid.

To my inexpert nose, it’s weird stuff. Smoky, sea shells, a bit of Germolene, a bit ‘off’. This is out of my comfort zone but hey, when am I next going to have a chance to try it? Cheers.

This is like drinking a bloody novel; a novel about living on an island and coming to terms with things. There’s so much to take in. I listen to the nerdy murmurings around me:

‘Not as good as last year.’

I’ve honestly never drunk anything like this, but again, what gives with all the expensiveness?

I’m told – patiently – that it’s some of the last whisky of its kind. I’d always thought that Scotch was in infinite supply, like trainers or something. Not so. The Port Ellen distillery closed forever in 1983. There’s more of Ellen’s signature malt in barrels somewhere, but when that’s gone, it’s gone.

I find out this is also true of Port Dundas, the panther one, and my new favourite, Convalmore. The party’s winding down; I make a beeline for Maureen.

When I ask for a road whisky, I disguise my voice, figuring this to be a one-dram-per-punter-type situation. She sees right through my ruse, smiles and pours me another anyway. Success. Turns out Maureen is responsible for blending a lot of the fine liquor being poured tonight, and she’s happy to see it appreciated.

I understand there might be some marketing chat and branding shenanigans that make a whisky go for mega-bucks, but these are definitely rare things; just like Juliette Binoche or George Clooney. Damn, I wonder if they hang out? If they do, I bet they drink stuff like this.