Discovering the world of indie bottlers

While traipsing the aisles of a London whisky show, our Whisky Virgin treads into a world of what he initially believes to be ‘fake distilleries’ and ‘scam artists’. Further investigation however reveals an unfamiliar side to whisky that piques his interest and reveals many a remarkable dram – independent bottlers. 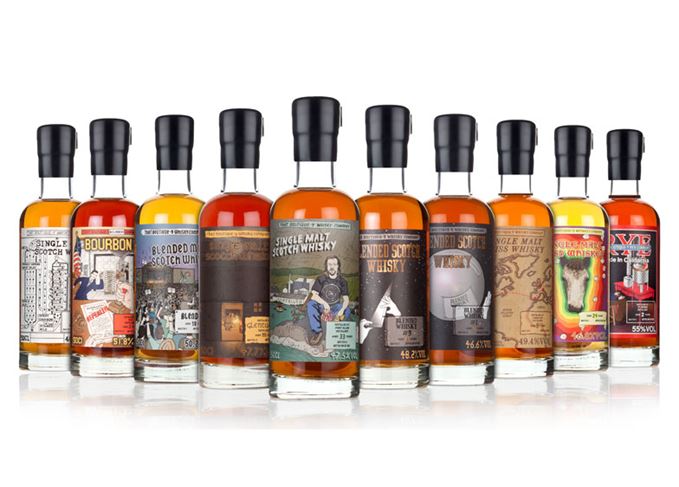 Unofficial bottlings: That Boutique-y Whisky Company is one of many independent bottlers selling sourced whisky

I’m three hours into my day at London’s Whisky Exchange Whisky Show and I have to say this is among the most educational experiences I’ve ever had in a fish market. Old Billingsgate is full of stands staffed by competing booze clans, offering samples of their wares to ticket-holding punters. These rival factions seem to have put their differences aside for this annual whisky summit, like when all the gangs got together at the beginning of The Warriors.

All of the whisky knowledge in the world is in this grand old room so there’s lots of chance to hit up the Yodas of booze for pearls of drinking wisdom. Did you know that spittoons are not just for cowboys and can stave off unconsciousness? Amazing.

But all is not well at the Whisky Show. While hitting up a booth wrapped in comic book branding I’m offered a splash of Bruichladdich. I remember this, I had one at the ‘laddie’ stand earlier. But the stuff these jokers are pouring isn’t even in the proper bottle and the label looks hand drawn. What kind of knock-off gear are you pedalling here, my dudes?

That said, my glass of maybe-Scotch does smell pretty damn tasty, sort of like toast and cereals. I take an experimental sip while eyeing up the friendly scam artist doing the pouring.

Wow, that’s not bad at all.

‘So, my man, it seems this “whisky” is good; nearly as good as the real Bruichladdich.’

He enthusiastically claims that this is the real Bruichladdich, specially selected by his firm to show people another side of a great Scotch factory.

Ah, so not just trading on someone else’s name but full on thievery, is it? Siphoned it off with a hosepipe like hooky petrol and put it in your own bottles, did you? Sickening.

I should alert the authorities about ‘That Boutique-y Whisky Company’. I wonder if the Feds have a whisky division, like the Sweeney but covered in tweed. I pretend to send a text but actually make some phone notes about the rascally hawker. Big fella, beard, looks like he could beat me up. With natural sleuthing skills like these I wouldn’t be surprised if the Scotch cops asked me to join the force.

I melt into the crowd. I need to find out what other shenanigans are going on up in this place.

The next dodgy dealers to catch my eye are trading under the name Port Askaig, which the chatter around the stand tells me isn’t even the name of a real distillery.

Look, mates; I know how this works. When I was growing up my Mam used to buy Prinkles brand stacking crisps. Our Jenga set came from a European discount supermarket and was called Fun-bloken. You’re just passing off an inferior product with a name that sounds sort-of legit. Actually, this is worse than that because I don’t think you can just make up a distillery. The whisky pigs will hear of this as well.

Try ‘Port Askaig’s’ 19-year-old supposedly-Scotch? Oh, go on then. Put it in the tiny wineglass they gave me on the way in, it’s probably at least alcoholic. None of the great detectives ever faced down a caper without a shot or two of nerve-sharpener.

This is… amazing; smokier than a kiss from grandma but much more enjoyable. It’s also blossomy yet powerful. I feel like a florist with a gun and nothing left to lose. Hooch this radical can’t possibly be a crime, can it?

I start to suspect that I’ve done my usual thing and missed the point here. I wonder if I’ll go on to learn something from this charming misunderstanding. Maybe I already have. Maybe the take-home is about how hard my Mam worked to provide snack treats and board games on a budget and how ungrateful I was… No, that can’t be it, there’s definitely a whisky lesson here.

Like I said, at a whisky show you can’t throw an oat cake without hitting a boozed-up sensei willing to dispense lessons so I ask some questions. I’m told that this is what’s called independent bottling, totally legit. My dreams of crime fighting glory fade but my interest remains piqued.

Indie bottled: Port Askaig sources its whisky from Islay but is named after a port on the island

The nice show-people inform me that not all whisky comes out the same. Two batches can be made in the same place of the same stuff and turn out different, like me and my far more successful siblings. Usually, Scotch houses mix their whisky together to make it taste consistent. Indie bottlers swoop in, purchase spirit from the source and try to make something a little different from the standard stuff, sometimes bottling it as single casks. These crazy characters then flip the product with their name attached, giving the likes of you and me the chance to take a walk on the wild side. They might tell you where it came from, they might not.

It strikes me that bringing indie Scotch to a party would be a great way to flex about how strong your whisky game is. Oh you like Mortlach? How ‘bout this limited edition Mortlach from an independent company? It’s a weird age and wicked strong. Yeah, haven’t seen that before have you, chief. Boom.

Not every indie-bottled whisky is a winner, though. As I bomb around the show trying as many as I can – for research purposes, obvs – I notice that some aren’t as good as their regular counterparts and even carry a higher price tag. So basically, what we’re looking at here is a gamble. You have to trust the people doing the bottling. As the sun starts to set on my day at the fish market I think I’ve found a couple that I do.

If a whisky show comes through your town you have to go. I may not have emerged from today a counterfeit-busting hero but I did get to try mad whisky and fill my fool head with some knowledge. Heroic in its own way? Maybe.

The big lesson for me is that putting together whisky is hard and the people who do it well deserve props. You know who else deserves props? Single parents shopping creatively to provide for their ungrateful offspring. Maybe I’ll bring Mam a bottle of that cartoon-y whisky next time I stop by for a game of Fun-bloken, I think she’d like that.