The Whisky Show, London’s biggest annual whisky festival, held last weekend, aims to use the space at Old Billingsgate on the banks of the Thames to full effect. With new bottlings aplenty and old favourites to revisit, Angus MacRaild finds a show beckoning both beginners and discerning enthusiasts alike. 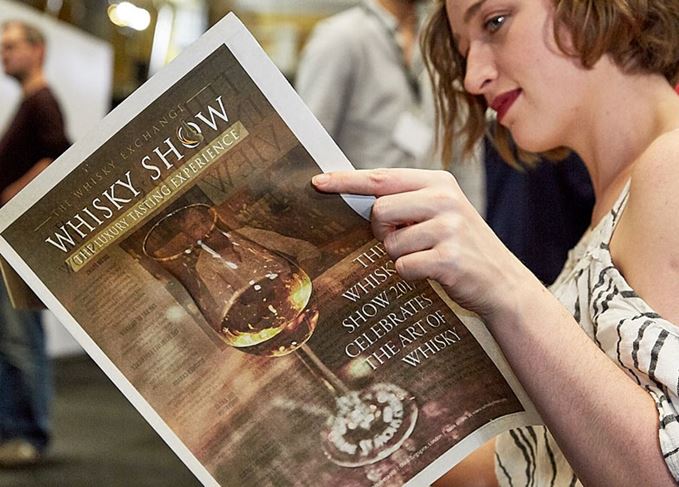 Read all about it: The Whisky Exchange Whisky Show celebrated the ‘Art of Whisky’

Beneath the vaulted brick and columns of Old Billingsgate, the whisky industry – its devotees, consumers, followers and critics – gathered once again for The Whisky Exchange Whisky Show (30 September – 01 October). This is its third year now at this venue and a resulting sense of permanence has settled into the show – something missing from previous years when it would change venue more frequently.

There was a sense in those earlier years of a more chaotic event; that behind the scenes a certain amount of muddling through might be occurring. Now though, the show feels slick, precise and choreographed. The layout of stands is considered and well executed, the lines structured to channel and disperse the hundreds of attendees carefully throughout the space.

Thinking back to the previous two years you can see the areas where things have been tweaked and tightened up. The Scotchwhisky.com Secret Garden tasting area was better served with its own speakers and contained audio, as was the main stage area. The food stalls were sensibly adjacent to the outdoor area; the announcements and audio clearer and better (despite the odd amusing mispronunciation).

Walking around, I noticed few occasions or places where there were choke points of people – something other whisky festivals would do well to learn from, as so much of the experience at these kinds of shows is about the physicality and management of the space itself. There was a sense of ease about the whole process of moving on from one stand to another, bumping into friends and taking time to dram and chat.

There was much to talk about this year. Above all else, it seems that value is on everyone’s minds more than ever, with many people lamenting the price of whisky at retail and on the secondary market. Some complained, while others simply expressed incredulity and scepticism. This was apparent in conversations with the exhibitors as well. It seems people are increasingly keen to understand the thinking behind pricing and quick to judge what they perceive as greed.

A recurring theme among several attendees I spoke to was the notion that trade shows are increasingly becoming the only way for them to taste or experience a large proportion of new bottlings. If the show does indeed function as a microcosm of the wider whisky community, then it demonstrated a curious evolution of thinking among consumers.

A flipside of this was that certain bottlings and companies tended to shine when quality and price were perceived positively. Not for the first time a number of people came away gushing about some of the new Loch Lomond products. If ever there was a distillery which has benefited from new ownership it must be this one; the new 1992 Inchmoan was a personal highlight this year for me.

Virtual reality: Visitors to the show were met with a variety of whisky experiences

The masterclasses were once again thematic and structured around this year’s overarching theme of the ‘Art of Whisky’, with notable figures such as Shinji Fukuyo, chief blender for Suntory, exploring in depth Japanese whisky maturation with an enviable line-up of Yamazaki cask samples. Or Bill Lumsden, head of whisky creation at The Glenmorangie Company, making the case for the Art of Innovation utilising some of Glenmorangie’s numerous past wood experiments.

Needless to say, the classes were all sold out once again. Although there arguably weren’t any ‘sell your grandmother to get a ticket’ classes, such as the G&M Generation’s Mortlach tasting from a couple of years back, the overall variety and quality of the tastings on offer this year was high and impressive.

The cynic in me might have been tempted to say, while wandering the stands, that the selection of drams on offer perhaps doesn’t change enough from year to year. But, the more time you spend with the independent bottlers – especially Signatory and the house stands like The Whisky Exchange and Elixir Distillers – the more this notion is confounded.

It is also important to remember that this is a show that strives – nobly in my opinion – to be all things to all people. It is an essential resource of knowledge and education to fledgling whisky enthusiasts. To fulfil this role while also catering to more grizzled types is not always an easy task. It’s a task the show often succeeds in, and, on the occasions where it fails, it tends to fail with dignity.

Shinji Fukuyo: Suntory's chief blender led visitors on an exploration of the ‘Art of Maturation’

It is also important for those of us with more experience to re-familiarise ourselves from time to time. The Whisky Show is a great annual reminder for me. A means to revisit and re-taste a number of benchmark bottlings and classic drams alongside newer sibling releases. I find the efforts of the show in this respect, to eschew elitism or snobbery and to embrace as much of the ever-expanding whisky world as possible, laudable.

I tasted a 20-year-old 1996 Millstone single cask malt during the Monday trade session that I might never have encountered were it not there at the show to be recommended and discovered. It ended up not only being one of the best whiskies at the show, but also one of the biggest surprises I’ve had in recent years. It is precisely experiences such as this that these shows exist to facilitate.

Perhaps the best aspect of the show though, for me, is the general sense of camaraderie. Many of us look forward to attending as it is the one event in the calendar where a number of us are together in the same place at the same time.

It is a time for lovers of whisky from far-flung places to come together and celebrate, inform and revel in good whisky and like-minded company. The social aspect is the vital resin that binds the commercial architecture of such an event together. It nurtures good conversation and re-kindles a sense of goodwill in times where it can often be easy to become a little dismayed with some aspects of whisky.

It isn’t technically called a ‘festival’, but the show is ‘festive’ and this is perhaps why it succeeds so well. The best commercial whisky events should serve to deepen knowledge, diminish cynicism, ignite passion, expose mediocrity and broaden our collective horizons. The Whisky Show has nailed these aspects with precision, integrity and fun.