While East Fife may not be home to as many distilleries as other parts of the country, it still plays a crucial part in the Scotch whisky world. With an array of stunning towns and eating and drinking treats to discover, it offers much in the way of life. Stephen Marshall reports. 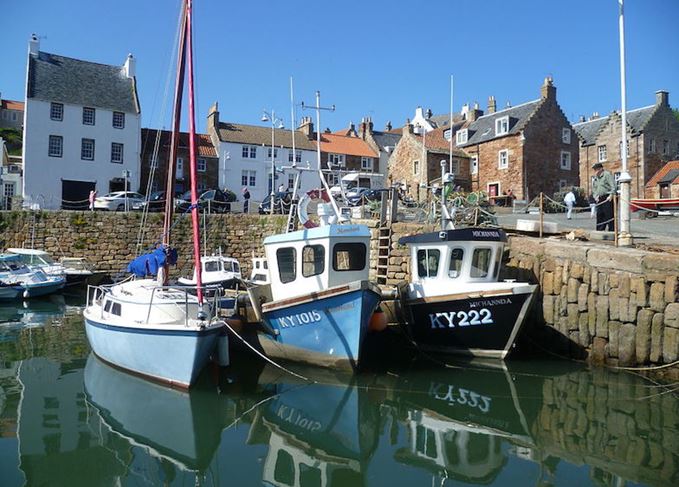 For whisky lovers, the glorious East Neuk of Fife, with its tiny fishing villages and hidden secrets, is full of treats. There isn’t as much whisky-making here as there is elsewhere in the county, but there is more life. Heading down the coast after exploring North Fife’s whisky renaissance, it’s the perfect next stage of my Fife tour.

The first stop for anyone should be to Cambo Estate, with its world-beating collection of snowdrops, which they celebrate with a festival in February. Then there’s Cambolicious, their local ale and music festival, which happens in May and November, and may be more up your street. There’s nowt wrong with good clean hedonism, after all.

For whisky folk, Kingsbarns distillery is just next-door and is an essential place to visit. It’s a pretty one at that, fitting perfectly into its beautiful surroundings. It’s set up for golf tourists, so try and ignore some of the stuff in the shop and give it credit for the herculean effort that was made to get it off the ground in the first place.

That a golf caddy managed to turn this venture into reality is truly remarkable. Doug Clement has left the business now, but he’ll no doubt pop up with something interesting again in the future.

The tour is worthwhile, although the opening video is pretty much everything that’s wrong with whisky, Scotland and old white men. The distillery set-up is interesting, with everything in one room and a trick of the light that makes the condensers seem just a wee bit too small.

For cheese toastie buffs, the real secret is to nip down to Kingsbarns beach to the toastie van. The best surfer I know classes Kingsbarns beach as a decent spot, and those toasties are apparently even better when you’ve been floating in the freezing North Sea for a good half an hour.

Maritime tradition: Anstruther is home to a Fisheries Museum – and a famous Fish Bar

The next village along is Crail, Fife’s hidden gem. I’m slightly reticent to talk about it here, because it doesn’t need any more folk discovering it. It’s doing quite nicely, thanks.

The brewing history in Crail, as in St Monans, Pittenween and Anstruther, is quite incredible. There were hundreds of breweries operating here until the late 1700s and, by 1741, there were 27 small brewers at work in Crail itself – but by 1887 there was only one left, according to Brewers and Breweries of Fife, by Forbes Gibb.

Today, there are no breweries and only two local pubs. But what great pubs they are: the Golf Hotel, with its dark, cosy bar and cheery bar staff; and the East Neuk Hotel, with its regular live music sessions. Both great places to drink.

Make sure you take a walk down to the beautiful harbour. There’s a wee café on the edge of the water where you can sit outside with some chickens, and a rug on your knees, if your joints are starting to creak like mine.

From there, head down to the lobster shack with a bottle of booze and some chips, get your lobster cooked and sit on the harbour wall, watching the boats come in, and ask yourself why you don’t live here.

Before you leave, get a treat from Barnetts, the local baker. A Sair Heid – a cake wrapped in a bandage – is my recommendation. It gives me sair teeth, but no’ a sair tum.

Rum is often the drink of choice among the fishing communities of the East Neuk, and no more so than in Anstruther. You mustn’t miss a couple of things here – the Fisheries Museum and the famous Fish Bar.

They’re right next to each other, so do them in whatever order you fancy, but make sure you go, because the Fish Bar has won more awards than Andy Murray, and the Fisheries Museum is only just behind the Museum of Scotland and the Hunterian in terms of showing us interesting aspects of Scottish culture.

Anstruther is also home to the legendary Fence Records, which has played its part in the whisky story. King Creosote toured the world with Dewar’s, and artists like James Yorkston celebrated album releases with single cask bottlings.

If music’s your thing, then move here – you’ll bump into folk like Malcolm Middleton in the street. You’ll probably form a band, and then maybe you’ll tour the world and long for home.

Some of the things that happen here are unique. The Yellae Deuks Easter duck race, where thousands of plastic yellow ducks are floated down the Dreel Burn, or the East Neuk Dook sea swim at Christmas, and don’t even ask about the Beggar’s Benison…

In St Monans you’ll find the East Pier Smokehouse, which Jay Rayner raved about and made too busy. It’s only open in the summer months, but it’s worth putting up with the queues to get your hands on the hot-smoked whole sea bass and the amazing chocolate brownies. I mean really amazing, by the way; if you could see my little chocolate-covered face, you’d know how I feel.

The next stop is Leven, not as picturesque, but one of the most important sites in the whisky world. The home of Cameronbridge grain distillery, powering the whisky industry by supplying the base for blended whiskies all over the world and housing Diageo’s latest experimental distillery – the experimentally-named Leven. Fife’s importance to the whisky world should never be underestimated.

What about InchDairnie distillery? It popped up as a fully-formed being with nary a word. Maybe because it’s not on a route that many whisky folk would be travelling.

There’s a nice contrast, though, between the proliferation of roundabouts around the outskirts of a new town slowing us down, the unnecessary extra road signs, the strange names – and the world of whisky... Wait a minute. There’s no difference – whisky is the perfect partner for a new town.

InchDairnie is the brainchild of Ian Palmer, and he’s made a distillery exactly how he wanted it to be, after years of learning exactly what he didn’t want from a distillery. It’s clean and looks amazing. Next time I’ll try the new make spirit.

We’ve not even talked about the most populous areas: Cupar, Kirkcaldy or Dunfermline, or we could be discussing the debt the whisky industry owes to the theories of Adam Smith or the industry of Andrew Carnegie.

The final stop on our trip is the Goth in Cardenden. Tommy Dewar, the scion of whisky marketing, once wrote a book called The Gothenburg Experiment about the radical Swedish pub system which made its way over to Scotland in the early 1900s.

I happen to know about it because a forebear used to run the Goth pub in Fallin. They were community co-operative pubs that were run well, and any profit was put back into the pub and other good things in the locale.

Presumably in the 1980s they died out because The Cure were on their jukeboxes too often for most folk’s tastes. The Goth in Cardenden is also the first pub that Ian Rankin’s John Rebus has a pint in... but that’s another story. No, really – it’s in a book that I’ve read.