With his wife Moira, James Doherty is determined to bring whiskey making back to Donegal. A former tea planter and executive with William Grant & Sons, Foster’s and SABMiller, he spoke to Richard Woodard about pot still mashbills, sourced whiskey and swapping Hong Kong for rural Donegal. 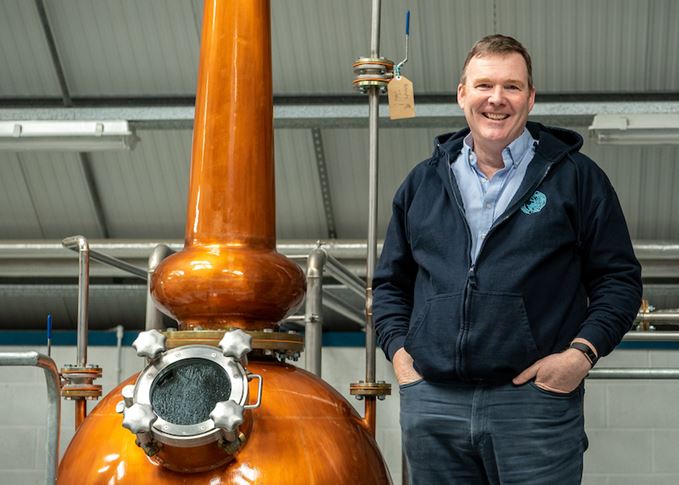 Donegal spirit: James Doherty with the pot still he uses to make An Dúlamán gin

‘We lost one site for the distillery – it just fell through – but we’ve bought a new site, we’ve submitted plans and we would expect to get planning permission within the next three or four weeks.

‘The new site is inside a town called Ardara. It’s a weaving mercantile town and it’s got lots of festivals, a community that really pulls together, but there’s also a few shops closed, so they can see the benefit of the distillery being there, not only in terms of creating jobs, but also feeding that tourism.

‘We’ve designed the scheme around not having the distillery as a separate destination, but as being a part of the village – so there’s no separate car park; you come into the main car park for the village and there’s a bridge into a field that leads to the distillery.

‘I would hope that we would be building September-October [2019], so probably October. I'm always too optimistic about these things! We’d hope to be installing distillery equipment September next year, distilling at Christmas time and opening the distillery formally I guess around St Patrick’s Day.

‘I kind of have this notion of Christmas Day distilling 2020 – but it might be New Year’s Eve, you never know. Someone said very early on: it will cost twice as much and take twice as long, and they're probably right.

‘It’s always been very clear that this is a legacy thing; it’s not about doing something to sell it, and we’ve been very clear and open with people about that from the beginning.

New plant: The planned distillery at Ardara may be operational by the end of 2020

‘I suppose the contention I have is that the flavour of Irish whiskey today is a post-Industrial Revolution, post-tax reform, city-based flavour. When the taxman taxed the number of stills and they all got bigger, everything became about scale and efficiency, and not about lots of different guys doing different things.

‘Both my grandfathers were poitín men, and it’s kind of inconceivable to me that they were using anything other than peat to dry the barley that they were making poitín with, so whiskey of that era – if they bothered to age it – would have been smoky, and quite profoundly so, I think.

‘We’ve designed the distillery around a triple-distilled peated malt, peated to 55 parts per million (ppm). Once you’ve triple-distilled, you’re probably getting down to about 35ppm to taste at the end.

‘The idea is really to try and take people with us on a journey. I’d love to say it’s an original idea, but I think Ardbeg did it particularly well. Year three, [we’ll have a] small single malt release to let people know this is where we're at; year four release the pot still; year five back to single malt – rather than each release being a unique parcel of barrels with a unique profile.

‘We’ll come to a point where that’s the definitive age and whether that’s a 10, 12 – we’re not sure yet. There’s one piece that you can’t get away from with whiskey, and that's time. You can nick around with casks till you’re blue in the face; ultimately, time is such an important factor.

‘The wood recipe? I don’t think it’s massively out there: we’re looking at 70% of them being American Bourbons, 25% Sherry (probably bodega Sherry because there isn’t that much genuine Sherry around these days), and then 5% specials that I suppose are important from a newsworthy perspective and keeping yourself relevant.

‘We’re aiming to make pot still with a mashbill of 50% malted barley, 30% unmalted barley and 20% oats, which would have been fairly typical of the mashbills in Donegal. It’s actually, as I subsequently found out, not a long way from the original Powers one.

‘The Technical File [stipulating a pot still mashbill of 5% oats max] doesn’t fit with tradition or historical precedent, and it should be brought into line.

‘I think it’s one of those ones where a Technical File needed to be produced, and there weren’t that many voices at the table. We should be noisy about it in the interim, but let’s get that Technical File amended.

‘If you lock down reasonably tightly around a certain identity, then what that forces is genuine innovation, not the release of lots of experiments. I did some experiments with the [William Grant] technical team up at Girvan way back… but I would be mortified if some of those things were released.

Village life: The aim is for Ardara to be very much part of the local community

‘We’re a two-tonne-mash facility, sort of Teeling Dublin-sized, and part of that is I would be worried about building a distillery, then kind of going: “Darn, I wish I’d built it bigger.” This is a number I think we’re comfortable with; comfortable may be a bit strong – sort of just not too scared of is probably a better way of putting it.

‘Actually I don’t think there’s enough [Irish whiskey production] capacity going in, if you believe the growth curves that the Irish Whiskey Association are coming out with. John Teeling’s the only guy who’s got serious scale of the independents [at Dundalk].

‘In blends you’re not so time-bound in terms of the age of the liquid. By putting together interesting parcels of stock with Silkie we’ve created a style which is softer in terms of mouthfeel.

‘If I had £1 for everyone that said: “Well, where’s the whiskey from?”… I'm not telling you. I am on an NDA [non disclosure agreement], but I’m not telling you anyway. I don’t need to tell you. It’s not about what’s in it, it’s about the way it is.

‘I’ve spent time with journalists talking it through, trying to put a case, which is: I’m not sure what you expect me to do. I’ve said in all my press releases that I source these whiskeys. We put them together to create a style; here it is.

‘The fact is we are based in south-west Donegal, that is where we live, this is where we are building everything; the legend that we have hung our story on is a west coast of Ireland legend. We’ve been completely transparent about it; but if you ask me to be transparent about where the liquids are from, that’s not part of the game.

Sourced spirit: Doherty has designed Silkie as a ‘softer’ blend – but don’t ask him what’s in it

‘It’s been a learning curve, it really has. Moira and I met in Zimbabwe and, at the time, we were growing tea and coffee, and you put tea bushes in the ground for 150 years – so what you do in those first few years is absolutely crucial.

‘We went from living in Hong Kong, which is a 24-hour city, where your kids are in school learning Mandarin, to Donegal and full-immersion Irish – it’s about as big a culture shock as you could impose on your kids. But they’re thriving, and we’re very lucky the school has a fantastic headteacher.

‘Things take forever. It’s slower than Africa, I think, but that’s because there are more moving parts, there are more people that you’ve got to involve, consult with, but there’s this extraordinary warmth from people, a kind of genuine engagement with what we’re doing.

‘We live in a house that we bought off the internet, which happens to be my great-grandmother’s homestead, and we didn’t know that until we moved in. There’s a salmon river running through the farm, it’s less than a mile to the beach, and you’re in the mountains in 10 minutes. There’s a quality of life that you can get here that’s extraordinary.’