Johnnie Walker’s plans to build a multi-million-pound sensory whisky experience in the centre of Edinburgh have been approved by authorities today (8 May). 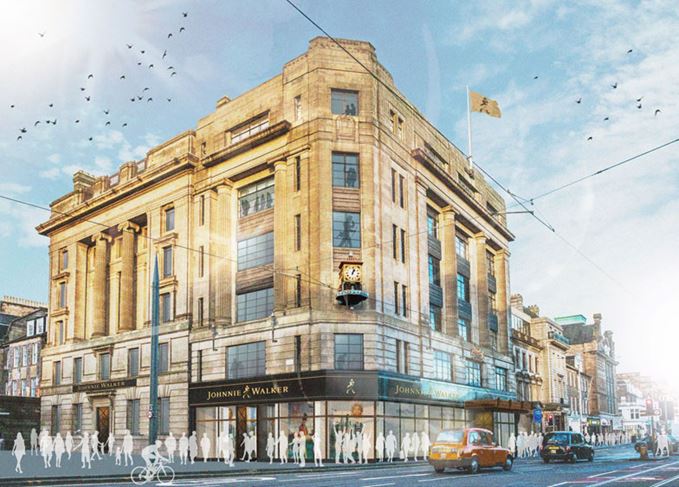 Situated within the former House of Fraser department store on Prince’s Street, the Johnnie Walker Experience will be a three-storey immersive space exploring whisky making and the blended Scotch brand’s 200-year history.

The plans, which were approved by The City of Edinburgh Council Planning Committee, include room for a flexible events space for staging music, theatre and arts; a rooftop bar – pending licensing approval – with views of Edinburgh Castle; and a street-level whisky store inspired by the new Johnnie Walker flagship shop in Madrid.

In addition, the building will house a hospitality academy providing training and employment opportunities for unemployed people.

The attraction is expected to create between 160-180 full-time equivalent jobs and boost tourist spend in Edinburgh by around £135 million.

Construction work on the site will now begin in ‘early summer’.

David Cutter, chairman of Diageo in Scotland which owns Johnnie Walker, said: ‘We have had great support for our proposals from local stakeholders and businesses in Edinburgh and we are grateful to everyone who has helped us to get to this stage.

‘We will continue to work with the local community as we now progress with construction and with making our plans a reality.’

The Johnnie Walker Experience forms a central part of Diageo’s £150 million investment in Scotch whisky tourism, which includes the upgrade of the company’s 12 distillery visitor centres across Scotland.

A further £35 million is being invested in reopening the silent distilleries of Port Ellen on Islay, and Brora in Sutherland.

Cristina Diezhandino, Diageo global Scotch whisky director, said: ‘We have ambitious plans to make this a truly world-leading attraction, drawing people from the four corners of the globe to Scotland and to give them an unforgettable experience in Scotch whisky and Scottish culture.’

Diageo originally confirmed its plans to build a Johnnie Walker attraction in the Scottish capital in April 2018.