Automation has allowed Scotch whisky to grow and maintain its competitive edge, but at what cost? Knockdhu distillery manager Gordon Bruce and his team take a hands-on approach to distilling and are no less efficient as a result, in his view. Yet the tide is moving the other way, and the prospect of an unmanned distillery is on the horizon. 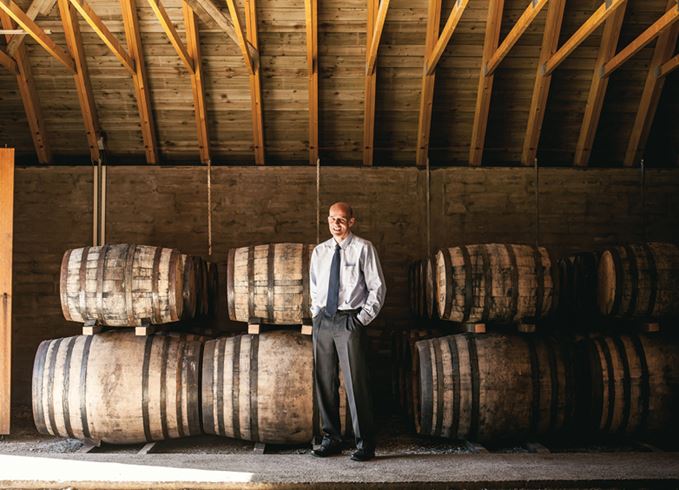 In 2006 we moved to a single-manned operation at Knockdhu without automating anything. We have six guys making whisky, one on each shift, an extremely hard-working assistant manager and a part-time tour guide, while I’m just there to add a touch of glamour. I say it time and again, but I just can’t speak too highly of the guys we have here. Nothing is too much trouble for them. They’re on their feet for the whole shift, and after a full day’s work they go home tired. I would call it a positive tiredness compared to sitting in front of a computer screen, following the process.

It’s a level of automation that they’re happy with, and so am I. I think as a team they work far better than machines. The technology to replace all that manual work now exists. It’s proven, it’s comparatively cheap, and is actually quite easy to use. My biggest concern is that in 25 years’ time we are going to suddenly wake up and realise that we have lost a whole generation of skills. I believe there is definitely a risk that we will have forgotten how to do things.

I guess I’m just a frustrated mashman at heart, but for me the most important part of distilling is grinding the malt, and the mashing process. It’s a part that’s so often overlooked these days. People think that distilling is about these big, sexy copper pots, when what happens in the stills is basically an extraction process. Get it wrong at the grinding or mashing stage and you’ll affect the quality of the wort, which can have a massive impact on where the alcohols are made, and on all the smells and flavours produced during fermentation.

The most important tool in the Knockdhu mash house is a broomstick, which we push below the mashing spout to measure the thickness and consistency of the mash. It’s not exactly hi-tech, but it does the job beautifully. The stills are also manually controlled and the operators are constantly on the go, moving up and down stairs to open and close the valves, and we still do the cut by hand. Personally, I always find it very disconcerting when I go into an automated still house.

The distillery is the least automated of the five owned by Inver House Distillers, and that’s probably down to me. I am sure it makes for a happier workforce, and for the last two years Knockdhu has been the most engaged and motivated team in the company, according to the regular employee satisfaction surveys we do. By not being too automated, everyone working in the distillery is involved in the process and it’s clear they enjoy what they’re doing. Without wishing to sound too much like the marketing department, I like to think that pride in the process and a sense of passion in the workforce comes through in the quality of the final product.

The feedback from people coming round the distillery is absolutely brilliant. They can actually see, smell and touch everything, and speak to the guys that make it. For me, that degree of interaction is priceless. I would like to think the level of interest among whisky drinkers might persuade the industry to value the human element in distilling more. I’ve visited distilleries that are heavily automated, and you don’t see the computer screens because they are cunningly hidden. Don’t get me wrong, automation is definitely needed on some sites due to the speed of the process and quantities being produced, but it’s not a ‘one size fits all’ scenario; let’s not automate just because we can.

Hands-on job: Knockdhu staff are involved in all aspects of the whisky making process

I’m not a Luddite by any stretch of the imagination, but I can’t see the need to automate something when people can probably do a better job than a machine. Just to give you one example; if you have malt sitting in the malt bin and the weather has been cold, people can adapt to that difference in temperature in the raw materials and make slight adjustments to the mashing parameters accordingly. I don’t think machines can do that.

Of course, some degree of automation has been beneficial. In the past, cleaning the washbacks required two men with a steam hose, whereas now you can use a pump on a timer and allow the guys to go away and do something more productive elsewhere. And we have come a long way from the old days of direct-fired stills and having to shovel the coal by hand. The advent of steam coils to heat the stills has been a good thing. All that coal dust and those nasty coughs are best left to the past.

Obviously in the whisky industry you need to be as efficient as possible. At Inver House we do a weekly report to compare the performance of each of our distilleries and it is actually a really good motivational tool. A couple of years ago I remember the managing director, on his annual walkabout, pick up this report when he was in the still house. He raised his eyebrows in my direction, and said: ‘It’s surely ironic that Knockdhu is the least automated of our distilleries, but it is the best performing site we have.’  Personally, I couldn’t see the irony in this.

There’s a big drive in the industry to make distilling more sustainable for the environment, although it is always going to be an energy-hungry business. We have managed to reduce our energy consumption by 35% over the last 10 years, but it has not been through technology. It has been by looking at the entire process and thinking how we could do things slightly differently.

Maybe things have moved on so far with modern science that distilleries that are the least automated, like Bruichladdich, Edradour and ourselves, should start to make a bit more noise about how we still do things in a traditional, hands-on way. Right now, I am convinced that someone is going to open an unmanned distillery, and probably fairly soon. It would be a distillery running 24/7 with a couple of guys to oversee the process from a distance. It’s clearly possible to do such a thing, but I don’t think it would do the image of the Scotch whisky industry any good whatsoever.