The almost symbiotic co-existence of distilleries and cats is a classic example of man and nature working in mutually beneficial harmony: rodent control in return for food and a warm bed. Richard Woodard reports. 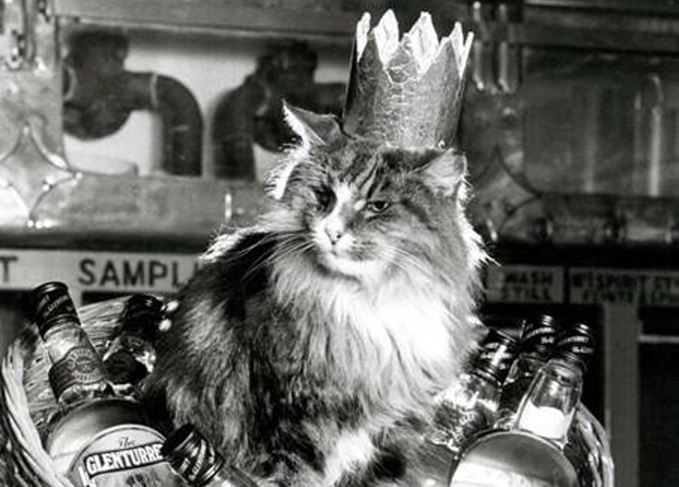 Cats: love them or loathe them, few would deny the small but significant role that they’ve played in the history of Scotch whisky, and in the smooth running of distilleries from Campbeltown to Orkney.

It’s a great example of man and nature working in harmony. The cat gets the two things it wants most in life – a warm place to sleep and a ready source of food – and the distillery gains a supremely effective rodent control system.

Where there’s barley, there’s mice. And mice, as any keen observer of wildlife will tell you, breed like, er, rabbits. Answer: introduce an agile feline or two to keep the population in check.

Over the years, most distillery cats have been content to remain in the background, happily wiping out swathes of the rodent population in return for the odd saucer of milk and a reserved place in the warmth of the stillhouse.

But one or two have emerged into the limelight to become characters in their own right, thanks to impressive feats of mouse-hunting, travels of Odyssean proportions, not to mention taking on the Aberdeen express (and living to tell the tale).

These days, thanks to the near-extinction of floor maltings and the jobsworth demands of food hygiene regulations, distillery cats are there more to pull in the punters than to assassinate the rodents. All the more reason, then, to celebrate these, the colossi of the whisky cat world. We salute them, for we may never see their like again…

All hail Towser. In the pantheon of mouse-catching machines, the famous cat from the home of The Famous Grouse reigns supreme, and it’s all about the numbers: almost a quarter of a century on duty at Glenturret, and a frankly mind-boggling 28,899 rodents liquidated.

Towser was a kitten of the ’60s, but seems to have skipped the ‘peace and love’ stuff – and she was still gamely terrorising mice until her death, three weeks short of her 24th birthday, in 1987.

Her longevity is attributed to the addition of a wee dram to her milk every night, although we should say that this is not a form of treatment formally endorsed by the veterinary profession.

If you’ve a calculator handy, you might have worked out that, for Towser to account for 28,899 mice over a 24-year period, she’d have had to kill three or four every day. That’s quite a vermin problem.

The story behind the figures is simple: a team from The Guinness Book of Records observed Towser’s activities for a few days, totted up the corpses and extrapolated the total from there. Not exactly scientific.

But let’s not allow such mundane concerns detract from the legend of Towser; a legend that lives on, both in the form of a statue at Glenturret distillery and, earlier this year, in a distillery bottling named after the mouser supreme.

Tommy: The three-legged Beast of Ardmore

Place of warmth: Ardmore’s stillhouse was one of Tommy’s favourite haunts

In the dark, cold nights of a Speyside winter, they gather by the fire to tell the spine-chilling story of The Beast, a three-legged cat with the biggest head the Ardmore stillmen had ever seen.

They called him… Tommy. Ok, so the name might detract slightly from the atmosphere of horror and mayhem, but there’s still no mistaking the awe that this rodent killing machine inspired in all who met him.

Semi-feral and fiercely independent, Tommy had two pleasures in life: basking in the heat of the Ardmore stillhouse of the late 1980s and early 1990s (the distillery was coal-fired until 2000); and decimating the local mouse population.

As for people, he could take them or leave them. Nobody could get near Tommy, until he decided to test the ‘nine lives’ theory to its limit by getting into an argument with the Inverness-Aberdeen express.

The result of that duel was a bloody stump where one of Tommy’s four legs had been (history fails to record the condition of the train). But, even then, he stoically refused all offers of medical attention, simply restricting his public appearances until his wounds healed.

Remembered by Ardmore veteran Gordon Grant as ‘a beast of a cat with the biggest head I have ever seen’, Tommy nonetheless ended his life quietly, dying of old age after finally putting his violent past behind him.

Dizzy/Passport: The globetrotter of Glen Keith and Strathisla

Journey’s end: Passport moved from Glen Keith to Strathisla in 1999

The year is 1993, the place Keith Bond One – and a container-load of ex-Bourbon casks has just arrived at the warehouse complex from Kentucky. But there’s something amiss.

Alain Greig, former director of heritage at Chivas Brothers, gets a phone call. ‘They said: “Alan, there’s something in this container. The boys can hear it moving around.”’

What to do? Drill a hole and gas whatever’s in there? That’s the somewhat startling suggestion from animal welfare charity the Scottish SPCA. Calmer thoughts prevail, the door is carefully opened and some food put down to tempt out the intruder.

What emerged, Greig recalls, was a ‘very bedraggled, dirty, black-and-white little cat’, staggering and blinking in the light. She’d survived the four-week-long transatlantic journey, by train, sea and lorry, by licking the condensation off the inside of the casks. Which explained why Dizzy, as she was instantly named, was so unsteady on her feet.

She wasn’t Dizzy for long. After quarantine, the well-travelled feline was taken to live at Glen Keith distillery, then the home of Passport whisky – and, given her odyssey, Passport seemed a wholly appropriate name.

Passport stayed at Glen Keith until the distillery fell silent in 1999, then renewed her travels with a quick hop across the Isla to Strathisla distillery.

Then, one Christmas, Strathisla closed down for an extended break, and employee Kay Grant took Passport home with her. And that turned out to be the end of Passport’s travels – she never returned to the distillery, but lived to a ripe old age at the Grant family home. And nobody from Kentucky ever claimed her.

Barley: Last of the line at Highland Park

Once upon a time, at the Orkney distillery of Highland Park, there were three kittens from the same litter, and they were named Barley, Malt and Peat.

Peat died tragically young, but Barley and Malt spent many happy years at the distillery – where their contrasting characters quickly became apparent.

‘Malt was a lady cat who liked to preen herself and show off,’ recalls Highland Park brand heritage manager Pat Retson. ‘She’d take people on her own tour of the distillery, tail up in the air.’

Barley, however, had a dark side. ‘He used to pretend he was a stuffed cat and lie on top of the till in the distillery shop,’ says Retson, ‘tail down, not moving. Visitors would come in and think: “Oh, look at that,” then all of a sudden the claws would come out. He would crouch there like a tiger.’

Over the years, a number of distillery visitors found out about Barley the hard way – and, even now, seasoned observers of the whisky scene are known to blanche at mention of his name.

Barley and Malt were together for 15 years, indulging in their favourite game of ‘chicken’ with the local traffic outside the distillery, until age slowed their reactions with fatal consequences.

Malt was first to go, with Barley following in similar fashion a couple of years later, in 2006. Retson blames Orkney’s escalating number of cars for their dual demise.

There was talk of a replacement, but this was stymied by the continued presence of floor maltings at Highland Park and the demands of modern Food Hygiene Regulations. Even the idea of a Towser-style statue of Barley and his siblings was a casualty of budget cuts.

A bittersweet ending to our tale but, to misquote Benny Hill, they won’t forget old Barley…