Glenburgie distillery had operated on Speyside for 175 years before it was demolished, and then rebuilt, in 2004. Distillery manager Richard Clark tells Becky Paskin about the challenges of rebuilding Glenburgie, and why – now released as a single malt under the Ballantine’s brand – it is one of the ‘unsung heroes’ of Scotland. 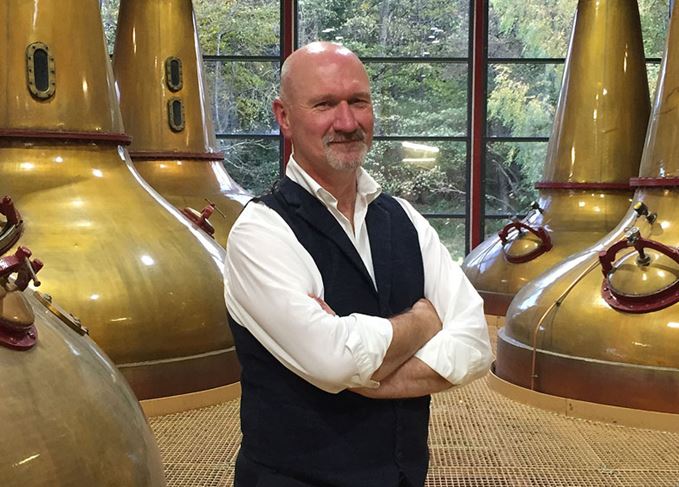 ‘I’ve worked with Chivas Brothers for 29 years, but I’ve been in the whisky industry for 41 years. I started in the labs at Port Dundas distillery, which at that time was part of Distillers Company (DCL).

‘I’ve since worked at many distilleries, from Glasgow all the way up to Scapa on Orkney, across the length and breadth of the company, working with different regions and dialects.

‘My favourite distillery to work at was Tormore, because I’d just moved from city centre Glasgow to Speyside. I moved from locking the house because you were going to the shops, to going on holiday for a fortnight and remembering a week down the line that you hadn’t shut the windows, and then not bothering about it. It impressed upon me the quality of life that is still available in this country.

‘Since then I’ve worked at Glencadam in Brechin, which has been sold on since. I was at Ardmore, which Chivas Brothers no longer has, but also Glenburgie and Miltonduff. I spent two years working out of Scapa when we were reopening and refurbishing the distillery in 2004-5, then I was at Glenlivet when we did the expansion there in 2009, when we doubled up the plant.

‘The idea to refurbish Glenburgie came in the early 2000s. I was here running the old Glenburgie during the initial planning, trying to capture all the core information we needed so we could replicate the manual tasks automatically.

Empty space: The original Glenburgie was hemmed in by the warehouses, water and manager’s office

‘That whole exercise was very collaborative, because we involved all the operators and we took in the expertise from the managers from other distilleries. At that time it was such a rare event to build a distillery that we wanted to make sure we got it right. We asked: “How do you do this? What problems have you had with that? What experience do you have with new technology?” because it was a whole new game to us.

‘Glenburgie was an old, small distillery, but we were under pressure to increase production. We could have tried to expand the original site, but the shape was hemmed-in by warehousing and the watercourse, so our options were pretty limited. There were costings done and the cost of refurbishing and reconstructing the old site was pretty much the same as building a new plant, which I think from memory was about £4.5m. That now seems like a real bargain to get a brand-new distillery for that.

‘In building the new Glenburgie there was a bit of righting all the wrongs. With many of the older distilleries there are the inevitable questions of “why did they put that there?”, “why did they design it like that?”. So we had the opportunity to actually make a better distillery, rather than just expand. The downside of that is you’re then responsible for the bits that people down the line then come along and say: “Why the hell did they do it like that?” Even now, coming back here looking at stuff, I’m wondering why we did things the way we did.

‘I was at Glenburgie at the time we discussed and agreed on the new build, but I’d moved on to Scapa before this place actually kicked into production. But we were all involved; it was a great example of teamwork – egos were out the way, everybody worked to get it right. Everybody was there to share positive and negative experiences, from yeast intake to washback cleaning.

‘I got ’Burgie back in February this year, and I now also look after Miltonduff and Dalmunach, as well as Scapa. With Dalmunach I’ve got the biggest, newest and most modern distillery in the portfolio, and with Scapa I have the smallest manual distillery.

Still here: The new Glenburgie was built in 2004 with an additional pair of stills

‘The main difference between the old and new ’Burgies is some of the technology has come along. We’re able to measure, monitor and control operations far better in just that 10-year period, but in essence we’re still making ’Burgie and that’s what were here for, irrespective of the technical equipment we’ve got. We still have to ensure we get that product consistency.

‘We moved one of the existing stills from the old Glenburgie distillery to the new one, but let’s just say in the old plant it had outlived its useful life. In fact it was held together by bands of solder, but we were in a position where we had to bring all the distillation equipment across. I don’t think we were necessarily flush with cash at the time so we had to make do, and that’s what happens at old distilleries. It wasn’t here that long before we did get around to replacing it.

‘As an industry we’re incredibly poor at recording our failures, and we walk the beaten track. You could end up changing parameters at Glenburgie that produce a spirit that’s spectacular, but it’s not ’Burgie. And if the blender wants ’Burgie, you supply them with ’Burgie. You can give them the option to make spectacular stuff, and he might ask you to make a batch of it, but it’s still not ’Burgie.

‘Distillers understand what they have to do to get what they want, and that a small change can have a radical effect on what you’re producing. Cleaning frequencies, temperatures, distillation rate, mashing temperatures, flow rates out the mash tun – all of these things have a different influence on the spirit. The more you can understand and measure, the more you can control, and the more consistent the spirit. That then helps the blender 15 years later to produce Glenburgie.

Complete rebuild: The original Glenburgie distillery was built in 1829, but was demolished in 2004

‘Since we built the new automated distillery, the style of Glenburgie has only changed in that it’s more consistent. If you reduce that variability – and you may still get some happy accidents in there – the blender is going to be happy. He doesn’t want to have to sort through the variability to get the consistency he wants.

‘Glenburgie being released as a single malt [under the Ballantine’s brand] is long overdue. ’Burgie is a wonderful spirit that is the unsung hero. Many distilleries are unsung heroes, but ’Burgie in particular has always been just sitting on the edges somewhere, although it’s been recognised within the company as being critical to Ballantine’s.

‘I have fond memories of the old distillery, and I have fond memories of the characters that were there. One of them still works here. It was of its era, and there are still bits that every now and then you remember. Like we used to take bagged yeast in, but the yeast fridge was on the first floor, and you had to take it in by forklift. They had the most horrendous forklift here on the planet. Most people get a dinky wee forklift, but this thing was a Manitou – it was used on a construction site – so to try and thread it through a narrow doorway inevitably the yeast bag would get caught.

‘There are fond memories, but you only remember the good bits – you don’t remember the crap, the things that would always break down, or that on a regular basis we’d put the draff out and used to end up with more draff on the roof than on the lorry.’