Having initially moved to New York to become an actress, Jennifer Wren quickly found herself in love with Scotch. Now the US west coast ambassador for Glenfiddich, she tells Becky Paskin about single malt’s battle with Bourbon, and the new Fire and Cane expression. 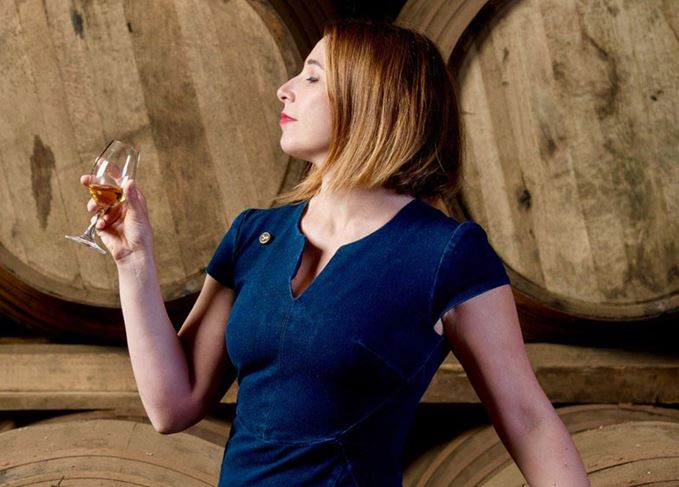 ‘Single malt is having an identity crisis; it doesn’t know what it wants to be. Certain labels have released bottles that have sold because they’re cheap and available and a young person who might be interested in single malt can afford it, but the liquid’s shit; it’s not representing the brand very well. Then other ones are going full prestige and alienating the young consumer. That is what’s happening in the US right now.

‘I’m from Atlanta, Georgia. When I was 18 I moved to New York City to work in musical theatre. I actually have a really beautiful voice, so I was a singer and a dancer, and I did a little TV.

‘Right around 2006 the economy really crashed in the US and because I was a freelancer I ended up not getting work. I didn’t know what to do and it was very scary.

‘A friend of mine was working as a brand ambassador for Moët Hennessy – when I say brand ambassador, I mean a girl in a liquor store. The bottom of the bottom of the bottom. She got me a job and it became this incredible opportunity for me because I cut my teeth in the industry learning to talk to strangers in liquor stores, which sounds insane, but if you can convince someone in that environment to engage with you, you can do anything.

‘Eventually, after three years, I ended up on this very small team in New York City with Glenmorangie and Ardbeg. I ended up being the lead spokesperson when we did whisky shows, and I just loved it. At a certain point, I thought: “I’m enjoying whisky way more than I’m enjoying auditioning,” because it was a lot more rewarding. So I decided to leave the performing industry.

Soul sister: Wren feels the heart of Glenfiddich distillery is in the passion of its people

‘I opened a company called Whersky, with the beautiful Tracie Franklin who is also a Glenfiddich ambassador; she was also an actor at the time. I knew her because we met in a musical called The Bob Haired Bandit and we both played men, which is kind of ironic considering the context.

‘Whersky was very much like Women Who Whiskey [run by Julia Ritz Toffoli], but it was this idea of creating these safe spaces for people of any race, gender or perceived gender, people who had not been welcome in this world, to taste whisky. The events were designed to be welcoming and intrinsically diverse. It was a fun and challenging time in my life.

‘Eventually I caught the eye of the brand manager of Glenfiddich; I was in the right place at the right time and I had the right perception of where the industry was going, everything from dusting off “this is your granddad’s single malt”, and shaking up the universe around how it was presented, like the kilt and the pipe.

‘When I first started, I would go to these tastings and the rooms were 95% men, and even 95% white. I had to learn to speak in a room of people who didn’t look like me, and I was consistently asked, “Do you really drink this?” Why would I want this job if I hated single malt? That’s stupid. But now I don’t get asked that question any more. Ever.

‘When I first started, there was a perception that I was only there because the real ambassador couldn’t show up. That doesn’t happen any more, people are used to seeing women in whisky. So, when I walk in, they’re like “of course she’s the west coast ambassador, obviously”. I don’t have to prove I have knowledge, they assume I have knowledge.

‘In America, because we have such a strong whisky tradition here, [Scotch whisky] is always battling perception against American whiskey. Here, American whiskey is the dominant factor; Scotch is the stepchild. We use a phrase here – King Bourbon – so no matter what kind of whisky you make, for the whisky drinker that walks into a bar you are measured against Bourbon, even if it’s completely irrelevant to what is in front of you. You’re measured against the flavours, production and heritage. That’s something that single malt and Scotch is constantly overcoming.

‘I’m constantly surrounded by single malt, so for me so much of it is obvious, but there was a study by one of our distributors which said that 65% of Americans don’t understand single malt, they don’t even know what the phrase means. How is that possible? But I realise I have spent the last 20 years of my life in the coastal cities in NYC and San Francisco, so I’m speaking to a certain group of educated, well-heeled individuals who have an invested interest in spirits.

‘We’re talking about Utah, North Dakota, places where we don’t consider them major markets. There may be a whisky geek in Utah who flies to San Francisco for WhiskyFest, but the average person you run into isn’t going to understand barley, yeast and water, or what it means to be a Scottish whisky at all. It’s all Greek to them. I think they understand what Bourbon is a little bit better. That said, people still say: “Oh, Bourbon has to be made in Bourbon county…”

‘Extending the experimental range is another example of leading the pack on innovation, which is the goal always of what we do. Glenfiddich sits in this very traditional space, but we’re also not afraid to take risks. With every step we introduce a new experimental we’re just pushing that boundary a little bit farther.

Sweet and smoke: Glenfiddich Fire and Cane is a peated malt finished in ex-rum casks

‘I do like to travel. Sometimes the travel can be a lot, but I feel like when I became the Glenfiddich ambassador I became a citizen of the world, and not a citizen of America, and there’s something really beautiful about that.

‘I used to use a hashtag, #whiskytakesyouplaces, because Glenfiddich has taken me so many beautiful places. There’s something almost religious about sharing food and drink; it’s a real communion with people and allows you to connect in ways you never would have imagined, and knowing people and understanding people has always been dear to me. Glenfiddich has become a conduit to open the doors of the world.

‘There’s been a big conversation in whisky recently around flavour, especially in no age statement, but I really do believe that if you’re in a tasting and you have three different styles and one appeals to you, go down that rabbit hole. Go out and try and drink whiskies that are that style of whisky, from all over the world. Let your palate lead you in your whisky journey. Don’t think you have to stay brand-loyal, style-loyal or even country-loyal.

‘The thing I love about the distillery the most is the people. I have such a great affection for Ian Millar, who’s our former global ambassador, and our coppersmith Dennis McBain, who is the heart and soul of the distillery.

‘There is something about Glenfiddich that there is just a soul, a realness. A genuine sense of “we’re not doing this to be flashy or cute”. There’s just a sense of purpose, and when you go there you meet all these incredible people who are all so dedicated to their job.

‘Everyone there takes it all so seriously. I’ve never been to a place where I’ve seen that level of dedication. And with that comes a soul. A really big soul. And us little minions who go out into the world, we try to carry that with us and carry that sense of loyalty and duty to the liquid.’