Inverness to Wick and Thurso

Scotland’s north-east coast is the road less travelled, a place of apparent desolation that conceals a rich culture and history. In whisky terms, too, there is more to this region than meets the eye, and a sense of renewal that balances the losses of history. Rob Allanson sets off up the A9. 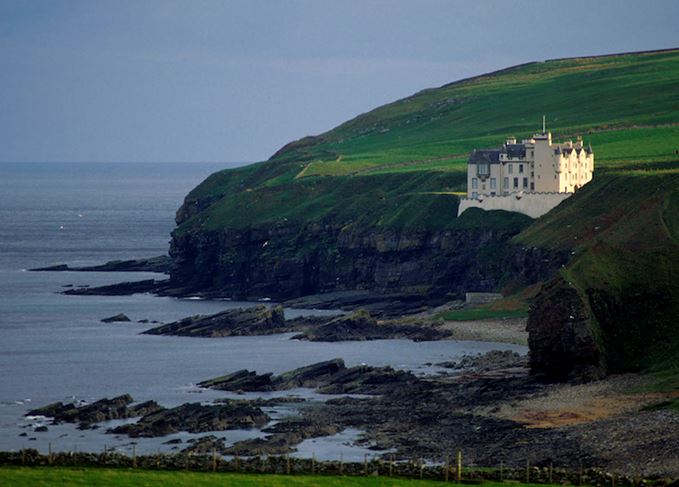 We are always told that the adventure in every journey lies in the getting there, not necessarily the destination. But sometimes it’s about picking your moment to go. And weighing up the weather in the north-east of Scotland can be more difficult than reading runes.

As I arrived into Inverness, the weather was great, but by the next morning things had turned grey and overcast as I headed up the road to Thurso and Wick – a road less travelled in distillery terms, but jam-packed full of history.

The road takes you past the mighty Inverness Caledonian Thistle football ground, then across the Kessock Bridge, offering great view across the Firth and the mysterious Black Isle.

The Isle is a place full of human history from ancient to modern, with plenty to explore from fantastic pubs (The Anderson at Fortrose) to Pictish standing stones and a ruined abbey.

Nineteenth-century poet, writer and religious firebrand Hugh Miller was educated in a local parish school, before an apprenticeship to a stonemason – and his work in quarries – led him to the study of geology. Despite having no academic qualifications, he is still considered as one of Scotland’s foremost palaeontologists.

Among his geological works are The Old Red Sandstone (1841), Footprints of the Creator (1850), The Testimony of the Rocks (1857) and Sketchbook of Popular Geology.

Miller moved to Edinburgh as editor of a religious paper, a post he held until, after struggling for years with depression and chronic headaches, he committed suicide, shooting himself in the chest with a revolver in his house on Tower Street, Portobello, on the night of 23 December 1856.

That same night he had finished checking printers' proofs for his book on Scottish fossil plants and vertebrates, The Testimony of the Rocks. His funeral procession, attended by thousands, was among the largest in the memory of Edinburgh residents.

If you wish to walk in the great man’s footsteps, The Hugh Miller Trail starts at a small car park on a minor road just past Eathie Mains, about three miles south of Cromarty, and leads about one mile down a steep slope through woodland to the foreshore at Eathie Haven on the Moray Firth.

It was here that Miller found his first fossil ammonite in Jurassic rocks. The haven, originally a salmon fishing station and later a fishermen’s bothy, is open to the public and has a display board all about the geology of the area, and Miller's fossil discoveries.

Meanwhile, the road stretches on, the pull of the north country magnetic. As you breast the hill, the view over the Firth and the Conon Bridge is spectacular. Somewhere off to our left, as we hit the roundabout, lies Glen Ord distillery. But this is not for us; the A9 is our mistress and she heads north.

The road hugs the coastline now, past the Storehouse of Foulis, where the doorstop sandwiches will offer welcome respite to the hungry. Passing Alness, depending on season and crop rotation, we see vast fields of potatoes rooted in the fertile black soil.

Further up the road you catch glimpses of strange structures out at sea, then closer in to the shore. An alien invasion? Huge, rusty, four-legged death-machines wading ashore in a quiet part of Scotland?

But no; this is where giant North Sea oil rigs are brought under the protective embrace of the firth, are repaired and, in time, come to die.

These metal giants are just the latest occupying force of sea and land. The whole region as we travel further north is drenched in human occupation and stained with the misery and memory of families wrenched from their homes to make way for sheep farming.

The Clearances mostly took place during the 18th and 19th centuries, and saw the eviction of a significant number of tenants in the Scottish Highlands. This so-called agricultural revolution, largely carried out by hereditary and aristocratic landowners, led to the enclosing of common land once farmed by tenant farmers.

Unprotected by the laws of the time, the brutality dealt out to the tenant families during these evictions, often at very short notice, still echoes across this northern land.

After the failure of the 1745 Jacobite Rebellion, and the subsequent bloody repression, the Clearances can be seen as the final blow to the traditional clan system and, ultimately, to much of the Gaelic culture. Often the only option was to emigrate, leaving behind a land that echoed, as in places it still does, to the munching and trudging of sheep.

As the A9 winds its way up to Wick, there is still a clear sense of being in whisky country, despite lacking the frequency of distilleries that you get in Speyside.

The road signs give away this region’s survivors: Tain, Invergordon, Dalmore and Brora. All worthy stops for the whisky tourist, with Balblair and Teaninich not far off the road too.

Legacies of boom and bust, declining production, questions over quality, the rise of DCL (Distillers Company Ltd), other distilleries winning the contracts to supply the major blending houses. The reasons don't matter now, but for the whisky archaeologist this is a fascinating part of the coast.

There is renewal too – at least five reasons to celebrate the revival of this road less travelled: Wolfburn in Thurso (our ultimate destination); Dornoch Castle distillery; at Dingwall, the crowdfunded, community-backed GlenWyvis distillery; plans under way to turn a powerhouse at Dunrobin Castle into a microdistillery; and, just outside Tain, Toulvaddie microdistillery, due to come into operation by May 2017.

The scenery from the road is mesmerising, offering stunning seascapes reminiscent of Japanese photographer Hiroshi Sugimoto. If the sea is flat and the sky is grey, you get that wonderful line-of-the-horizon view. Meanwhile, dramatic weather rolls in, churning the sea, smashing it against the cliffs.

We reach the fishing town of Wick, its heart the harbour, where you can buy fish fresh off the fishing boats, some of them seemingly barely robust enough to tackle the rigours of the North Sea. Wick is home to Pulteney distillery, with its squat stills and oily, salty drams; but it was also one of the last bastions of prohibition in the UK.

It all started with the Temperance movement; backed by an Act of Parliament, it took it upon itself to ban alcohol from this sea-battered town. Even today, the distillery holds a celebration on 28 May, the day in 1922 when every pub closed and all the off-licences removed alcohol from the shelves. This ‘dry’ period continued for nearly twice as long as the more famous American Prohibition, and finally came to an end only in 1945.

The glory days of fishing long gone now, the harbour is quiet for the most part, but the sea continues to exert a strong pull on communities here, with legends of mermaids and other sea creatures filling the local folklore.

One infamous character stands out in the tales: the pirate John Gow, later in life more associated with Orkney, but born in Wick in 1698. He and his crew terrified local fishermen, stealing their catch and sinking boats.

Gow’s career was eventually cut short on Orkney, and he was taken to London in chains and executed. His exploits live on thanks to Sir Walter Scott and his book The Pirate.

One part of this trip you really have to be prepared for is the Berriedale Braes. This steep, winding part of the road might not look much on the map, but when you are in second gear, feathering the brakes and wondering if the car might roll over, it becomes altogether more impressive. The emergency exit lanes are a constant reminder that sometimes it does go wrong.

Now there are decisions to be made: the longer route up to John O’Groats, braving the selfie sticks at the end of the British mainland – or a left turn inland to Thurso. Thurso it is, out across the flat peat fields of Sutherland, named by the Vikings to whom this land once belonged.

Welcome to the Flow Country. The is one of the true wild places left in the UK, a vast expanse of peat bog stretching for some 4,000 sq km. If you could soar above and get an eagle’s eye view, you would see troughs of water linking pools to others, a mix of colours and light twinkling like a multi-faceted jewel. Breathtaking.

But you are not alone; despite appearances, this region is teeming with rare birds and incredible plants. If you want a place to be inspired by peace and wide open spaces, you’ve just found it.

The ultimate destination for any whisky traveller heading this far north has to be Wolfburn. Now the most northerly mainland distillery, it has brought life back to this remote outpost, where once a handful of distilleries stood. Aptly, this marks the end of this forgotten route, through a land of resilience and rebirth.

For the passenger, a dram; and for the driver? Well, unless you’re thinking of taking the ferry to Orkney, a slap-up meal and then point the car south to Inverness. Stopping, of course, at all those sites you promised yourself you’d visit as you passed them on the way up.