Film screenings, tours around the silent stills of Brora, live music, ceilidhs and plenty of first-rate drams – it’s hard to believe Dornoch Whisky Festival is only in its second year. Angus MacRaild was there. 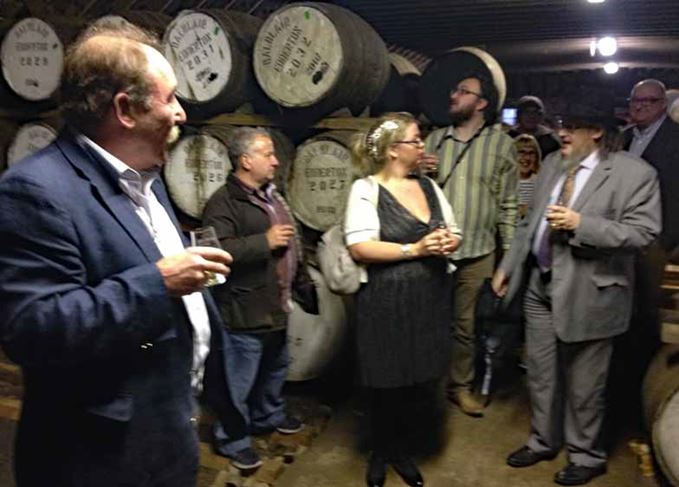 The Angel’s Share: Guests sampled a 2002 Balblair fresh from the barrel before the film screening

Say to someone the name ‘Dornoch’ and you’ll most likely either get a response that mentions golf or a simple: ‘Where?’. It’s a name associated with whisky to a rather small and specific audience of enthusiasts, although that may change in the near future with the continued growth of the annual Dornoch Whisky Festival and the new Dornoch distillery, which at time of writing is just a couple of weeks away from production.

Perhaps it’s the stark contrast with Speyside which inhibited the notion of a ‘Highland’ whisky festival for so long. To look at a distillery map of Scotland and see such a bunched-up concentration of distilleries just around the corner in Speyside only serves to highlight the sparse scattering of the Highland distilleries by comparison.

But put that out of your mind and think of what lies to the north of Inverness. Once you pass Kessock Bridge and begin ascending that northern Tarmac spine of Scotland – the A9 – you begin to realise the potential (and sense) of a Highland-themed whisky festival. That little scatter of eastern Highland distilleries forms the basis of Dornoch Whisky Festival.

Of course, it helps that by and large the distilleries in this region still make excellent, personality-rich whiskies. From the luscious fruitiness of Balblair to the coastal and wax-scented Clynelish, there’s ample opportunity to open up these great distilleries for something out of the ordinary. The question is: did it work?

The festival runs from Friday to Sunday. Events are scheduled at different distilleries the length of the region; dinners, tastings, tours and film screenings. The Saturday afternoon is dominated by what’s called the ‘Gala Tasting’, but in reality this was a more traditional whisky festival where distilleries and local producers showcased their wares to visitors at Dornoch Castle Hotel. Ticketed events continued into the night at distilleries, while the hotel served as a hub of sorts, with live traditional music in its bar each night and a ceilidh and barbecue on the Saturday evening.

The one thing that struck me looking over the list of possible things to do was that there were almost too many options. Tours of Teaninich – rarely open to the public – clashed with extensive tastings at Glen Ord or a dinner at Dalmore. So the tyrannical rule of choice was out in force. In some ways, it’s unavoidable that events will clash, given the distances between some of the distilleries – but the quality of events on offer could not be denied.

In the end, I opted for the screening of The Angel’s Share at Balblair distillery on the Friday night. Hosted by Charles MacLean, it was one of those events that re-affirmed what a special place Balblair is. Standing in the warehouse sampling a 2002 fresh Bourbon barrel sample before strolling back to the distillery under a dying autumn light, all my inherent cynicism suddenly felt quite far away.

A stellar line-up: The tasting in the Carnegie Whisky Cellars was akin to a whisky meditation

The rest of the evening was spent working our way through the current range of vintages while watching the film. In this age of slap-dash releases and often frustrating NAS bottlings, the vintage approach taken by Balblair and the clear care with which these whiskies are put together is beyond refreshing.

Saturday was spent moseying my way around the Gala Tasting and chatting to some of the people displaying local food, which was an excellent and refreshing addition to the mix of whiskies and breweries present.

Come the afternoon, though, it was time to head next-door to the Carnegie Whisky Cellars, Dornoch’s new whisky shop, and to attend a tasting again hosted by Charles MacLean, a man of enviable stamina. I wasn’t sure what to expect from this, but I was pleasantly surprised to find a single table for just eight people to sit and taste six quite exceptional whiskies. The tasting began at 3.30pm and, by 6.30pm, we were only on the fifth whisky. It was one of the most enjoyable tastings I’ve been to in a long time – one that became more of a wonderfully in-depth meditation on all things whisky.

We delved into history, science and ideas about the future direction of whisky with equal relish and depth. It was a true pleasure and probably the highlight of the weekend for me. The final dram we had was the new Millburn 1974 Rare Old by Gordon & MacPhail. An exquisite and fruit-laden diamond of Highland single malt – no wonder we took so long to finally call it a day; I think we would have sat and drammed all evening if the shop didn’t have to close.

Sunday was Brora day. What else is there to say about Brora and the old Clynelish distillery? It’s hard to articulate just what a grip this place and this distillate have over the collective mind of whisky enthusiasts. To visit it as a casual observer you would be forgiven for thinking we’re all a bit special in the head.

Viewed dispassionately, it’s a ramshackle collection of buildings; grey stonework mixed with steel and concrete in a fashion that comes across as something of a decades-old vision of dystopia. But in many ways it is exactly this aesthetic that makes the endlessly beguiling beauty of the whisky all the more special and enthralling. We were led around the site by Jacqueline, the sort of guide with an enthusiasm, passion and wit that makes you hold your faith in Diageo.

We were led through the filling store, the warehouse and the old offices. Along the way we were lucky enough to get a glimpse into the stillroom; the stills looking sad in their bird shit-flecked squalor, but still quietly mighty nonetheless. Everywhere you looked there was moss, lichen or grass in slow advance over walls and surfaces, Mother Nature reclaiming what was always hers in the first place.

We even noticed a hive of bees that had taken up residence inside the cracks to one of the external still house walls (perhaps the source of the elusive waxiness, we joked). Drinking a run of Special Release Broras out in the dazzling Sunday brightness amid the silence of the old distillery was something for which the only word really is special.

With that it was back to Dornoch Castle Hotel, a tasting of old and rare Balblair whiskies and, eventually, bed. I hope the festival continues in the future. It still feels young and slightly rough-and-ready, but it is something of vital importance to northern communities such as Sutherland and the Black Isle. What’s more, if you love whisky at all, you’d have to work hard not to have a great time there.