Why bother with stainless steel condensers?

24 September 2019 by The Whisky Professor

As Glenmorangie prepares to experiment with condensers made of stainless steel in its new still house, the Whisky Professor considers what impact they might have on whisky flavour. 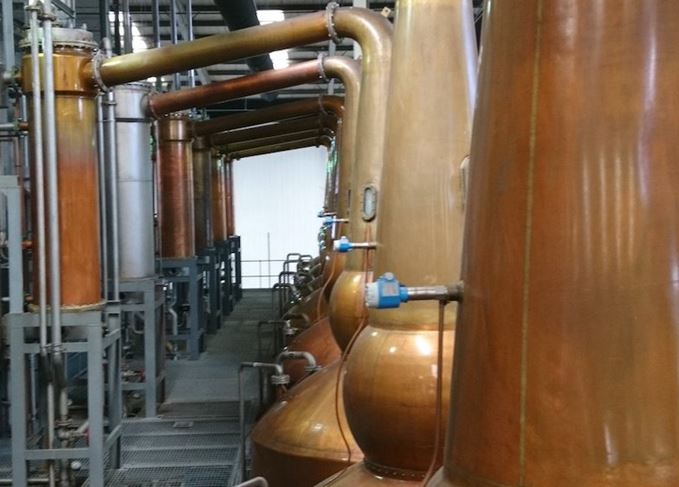 I see that Glenmorangie is installing stainless steel condensers in its new still house. Why would it do this? Is copper just too expensive these days – even for a company as wealthy as LVMH?

The planning application for the new still house at the Glenmorangie distillery does suggest that stainless steel will be used, but I’m sure that cost was not the reason for the decision. The distiller will be following a small but significant band in utilising this method of condensing for flavour purposes.

All of this comes back to the role that copper plays in distillation. It’s a topic I’ve touched on before but, to recap, copper is excellent at removing heavy (sulphury/meaty) elements from a spirit when it is in a vapour state.

As one of my mentors told me: ‘The longer the conversation is between vapour and copper, the lighter the resulting spirit will be.’ This can be achieved by slow distillation or a tall still (both providing more time for the conversation to take place), air resting between distillations to rejuvenate the copper, and/or using shell and tube condensers (which are packed with active copper), rather than worm tubs.

It is easy to extrapolate from this that the more copper there is, the ‘better’ the spirit will be, without any of that nasty smell of cabbage and struck matches hanging around. But whisky, as I’m sure you have realised by now, is not as simple as that.

Condensers play an important role in this. The best paper I have found on the subject was written in 2011 by Barry Harrison (and Olivier Fagnen, Frances Jack and James Brosnan), and it forms the basis for the following technical explanation.

To test what effect copper had on new make spirit, Harrison and the team distilled in small wash and spirit stills. One pair was made from stainless steel and the other from copper. Parts of the stainless steel stills could also be removed and replaced with copper.

There was little surprise that the stainless steel still produced a more heavily sulphury/meaty spirit, but it was also found that these levels were similar to those from the 100% stainless steel still when copper condensers were used, suggesting that it was too late in the distillation process for this injection of copper to clean it up. This was reinforced by the fact that adding copper to other parts of the pot did, however, reduce meatiness.

The research then looked more specifically at what sections of copper had the most impact. It was found that, while copper could reduce sulphur elements, a hybrid copper-steel still would never be as effective as a 100% copper still.

Condensers were discovered to be the most effective at removing sulphur in the wash still, but the reverse seemed to be the case in the spirit still. Something odd was happening.

The conclusion here was that the copper in the spirit still condenser ‘controls sulphury and meaty aromas by an additional [and as yet undiscovered] mechanism other than purely by removing sulphur compounds’ and that this only happens when the pot has already reduced the sulphur levels.

Spot the steel: Diageo’s Roseisle distillery has both copper and steel condensers

Discovering what this mysterious mechanism is may involve peeling back the catch-all term ‘sulphur’. The research demonstrated that it was more complex than just DMTS (dimethyl trisulphide) and revealed other, as yet unknown, sulphur compounds which could contribute to meatiness and could play an important role in the interaction taking place between copper and vapour.

Why, though, if sulphur is often regarded as an unwanted aroma, would a distiller want to encourage it? The key to this isn’t the sulphur in the new make, but what happens to it after maturation. Once the overt sulphur goes, fascinating base characters are revealed. These can be meaty or aromatic, but they are always intense.

Sulphur can be a positive attribute in a new make – a marker to what the spirit might become. Craigellachie, Speyburn, Glenkinchie, Dalwhinnie, Mortlach (and others) all have a deliberately sulphury new make character. All have worm tubs.

Things become slightly trickier if you want to make sulphury/meaty from a site already fitted with condensers. You could limit the copper conversation through the size of the still, not rejuvenate the copper, and run the stills hard – or install stainless steel condensers.

The last was an option taken by Dailuaine and Fettercairn in the past (both sites now have only copper condensers). Currently, both Ailsa Bay and Roseisle have stainless steel as well as copper condensers, and can switch between the two.

This allows each to make a ‘light’ spirit from copper and a ‘heavy’ and more intense new make from stainless steel. The latter will require longer-term maturation to remove the vestigial sulphur compounds. Quite what Glenmorangie is planning we will discover when the building is complete, probably in 2020.